On What Would Have Been Her 60th Birthday, Princes William and Harry Come Together to Unveil a Statue to Diana, Princess of Wales 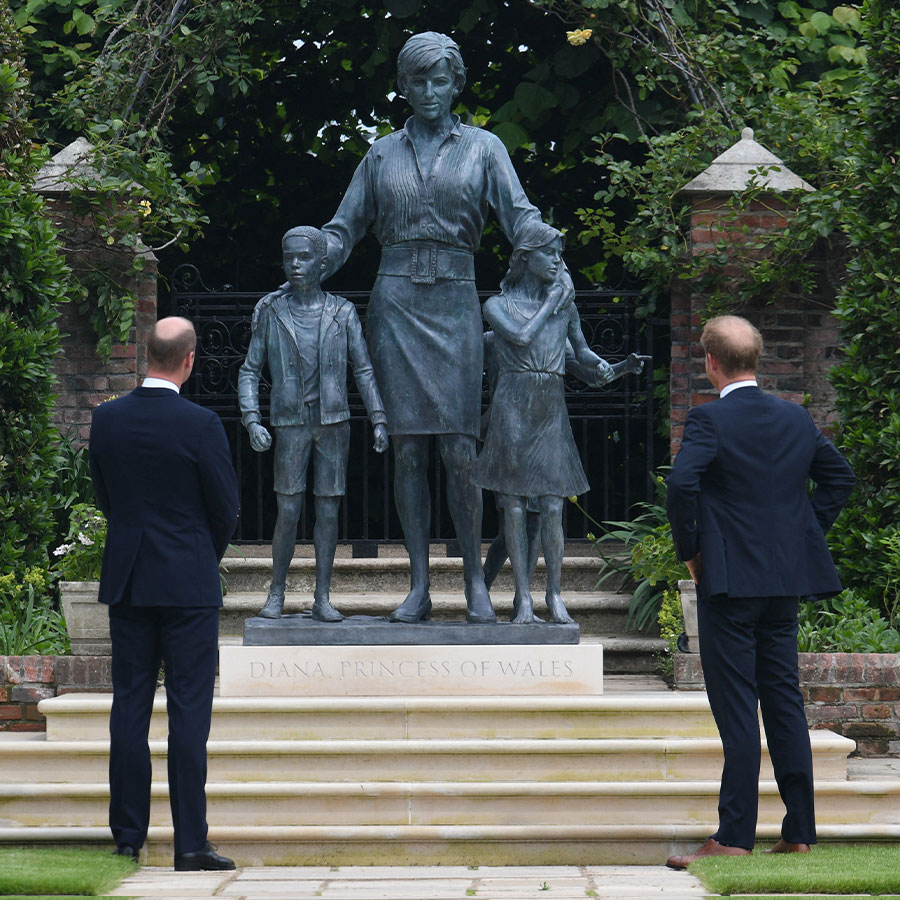 Prince William, Duke of Cambridge (L) and Prince Harry, Duke of Sussex unveil a statue of their mother, Princess Diana at The Sunken Garden in Kensington Palace, London on July 1, 2021, which would have been her 60th birthday. Photo: Dominic Lipinski/POOL/AFP/GettyImages

Princes William and Harry put their differences aside on Thursday when they unveiled a statue to their late mother Princess Diana on what would have been her 60th birthday.

The brothers, whose falling out has been the subject of intense media focus, displayed a united front as they revealed the statue they commissioned in honour of Diana in the Sunken Garden of Kensington Palace in central London, her former home.

“Today, on what would have been our Mother’s 60th birthday, we remember her love, strength and character – qualities that made her a force for good around the world, changing countless lives for the better,” the brothers said in a statement.

“Every day, we wish she were still with us, and our hope is that this statue will be seen forever as a symbol of her life and her legacy.”

William, 39, and Harry, 36, were joined by their mother’s brother Charles Spencer and her sisters Sarah McCorquodale and Jane Fellowes for the small, private event at the Sunken Garden, one of Diana’s favourite places.

A favourite spot of the late Princess Diana, the Sunken Garden at her former London home Kensington Palace has been redesigned to house a statue in her honour to be unveiled on Thursday by her sons, Princes William and Harry.

The palace said the garden had been redesigned to create a “more reflective” setting for the memorial to the princess, who died in a Paris car crash in 1997.

“This has been a very special project to work on, as the Sunken Garden was a favourite place of Diana, Princess of Wales,” Pip Morrison, who designed the new layout, said in a statement.

“We have worked carefully to ensure that the new layout and planting scheme compliments the statue, providing a calming place for people who visit Kensington Palace to remember the princess.”

Work on the Sunken Garden started in 2019 and has taken 1000 hours of planting, involving more than 4000 of Diana’s favourite flowers including 100 forget-me-nots and 300 tulips.

The garden was originally created in 1908 at the instigation of King Edward VII in an area previously occupied by potting sheds and greenhouses.