Putting the Family in Royal: As England Loses Euro Final, Kate and William Comfort Prince George, Signalling a New Era for Parenting and the Crown 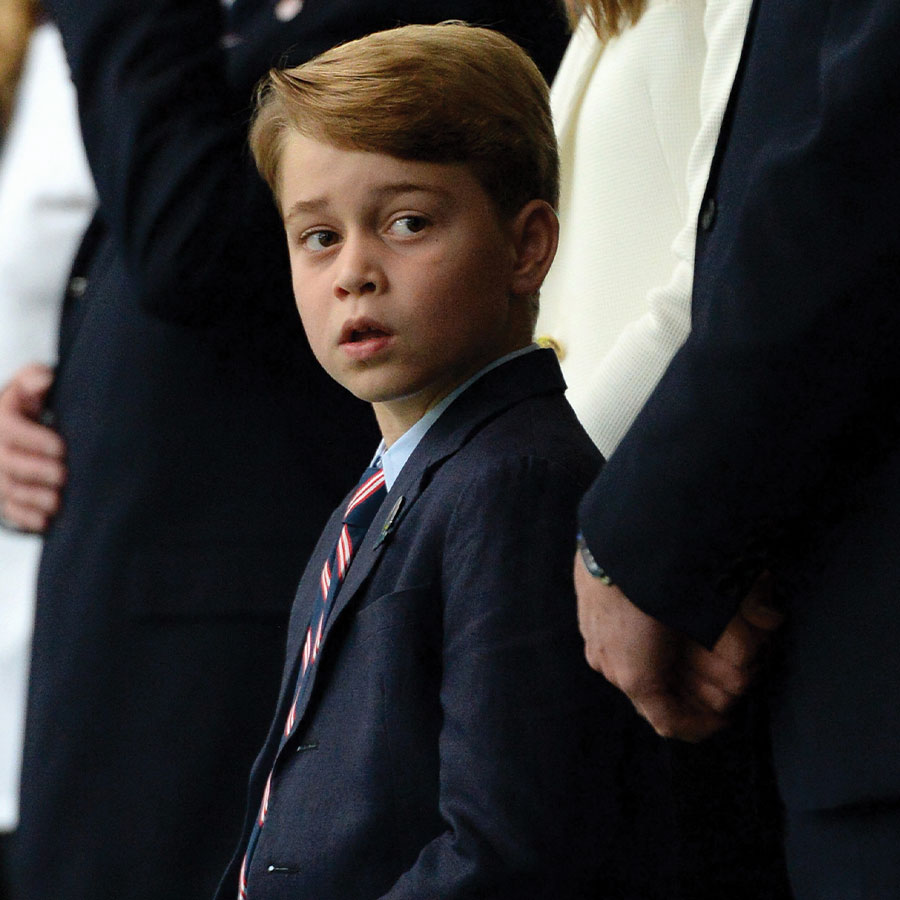 When “God Save the Queen” rang out yesterday over the loudspeakers at Wembley Stadium for the Euro 2020 final between England and Italy, doubtless all eyes were drawn to Kate and William, who brought Prince George to his second game of the football tournament. The trio, the very future of the monarchy, also reflected the very modern approach the Duke and Duchess of Cambridge are taking to teach George the ropes of King-in-waiting.

Cameras caught the family celebrating the highs of the game — England’s goal by Luke Shaw at the exhilarating two-minute mark of play — and the bitter low, when Italy took the trophy on penalty kicks. In both instances, the loving, physical interaction between mom and dad and son was on display. At the England goal, George hugged first dad, then mom. And as the final result became clear, William held his son’s tiny, suited shoulders and stroked softly to comfort the tiny football-crazed fan. It was an excellent life lesson for young George—that we don’t always get what we want, sadly. The next day, George learned another life lesson when dad William spoke out strongly via a social media statement denouncing the racism shown by some fans towards Black members of the England squad. Even if he’s not aware of it now, shielded due to his a tender age from the ugly side of humanity, he will one day learn his father took a stand for what is right.

Prince George’s suit — he was dressed as a mini-me of William for both stadium appearances in this tournament — was unquestionably adorable. Is there anything more touching than a 7-year-old in navy serge? (George turns 8 on July 22.) He made the front pages beaming in his suit the day after England defeated Germany at the end of last month, a good luck charm for a pandemic-battered nation.

This time, there was tabloid coverage — wringing the content barrel dry, really— that Kate was the one who insisted George, again a future king deep in decorum training, wear the formal attire, while William had wanted his son to be able to wear an England jersey. There is a famous shot of George released for his birthday in 2019, where he is seen in an unusually casual moment, wearing an England jersey.

William was made to wear a great deal of formal gear in his own early years, from those adorable-but-anachronistic little pie-crust collar sailor onesies in their infant portraits through years of public-school suiting. And yes, George’s years in formal shorts have their own Instagram fan accounts. Every young middle-class and upper-class British schoolboy is familiar with the rigidity of dress codes.

But George in these years is as much a part of the story told by clothing as is his mother, the diplomatic dressing superstar. Like Diana before her, Kate telegraphs everything with her clothes. In fact, her Euro finals outfit — a white blazer and top above navy bottoms and big, red earrings by London label Blaiz, referenced England’s flag — was a quick change from the Beulah pink belted dress she wore yesterday morning to Wimbledon. Every item of clothing is worn for a reason.

That Kate attended Wimbledon in the morning with her own father, Michael Middleton, was also significant. For it is the warmth of Kate’s famously middle class, Home Counties upbringing and close-knit family unit that was also on display later at Wembley. It also brought to mind who was missing from the picture: One couldn’t help but think of all the major events of the past which William and Kate and Harry attended together, from marquee sporting events to rock concerts.

Harry threw some heavy shade at his immediate family in the Oprah interview, saying his father and brother were “trapped” in their royal destinies and roles. He also talked about the legacy of restrictive, cold parenting in the Royal Family. Well, the trio of Kate and William and George would seem to put the lie to all that noise: the young parents very publicly showed support and love for their eldest child. Future leader George had help to absorb the disappointment of defeat, a critical life lesson in how to channel the moods — good, bad and otherwise — of the public. George is destined for a life of service, yes, and as Harry points out, that can be a drag. But it would seem Kate and William are leading with George’s interests: taking him to a historic football match is a great carrot to ease into the stick of the responsibilities he is to one day inherit. Training him how to handle crowds and cameras, they were very visibly by his side, literally hands-on parents, trying to be as normal as highest-wattage royals can be.

The working Royal Family as a whole has been highly visible both in the depths of the pandemic and now as restrictions are lifted. They made a full-court diplomatic charm offensive at the G7, there has been a rush of activity around Ascot and the Royal Horse Show, a senior tour of Scotland and now the Prince George moments at the Euro Cup. The Queen learned her own royal ropes during the Second World War and never forgot how the monarchy could connect with people in times of crisis. There was one notable lapse when Elizabeth II misread the mood of the people: when Diana died in 1997, she held to tradition and stayed on as planned at Balmoral. When the outcry arose, she took a beat and then began listening, and eventually honouring, the public’s need to mourn, and for her to be seen mourning at their side. She learned that lesson, and has applied it beautifully during the pandemic. Her finest moment, perhaps, was when she made an unprecedented address to her subjects in lockdown, as the hospitals overflowed. Calling for stoicism, she offered as hope a line from wartime songstress Vera Lynn (who was to herself die later last year): “We’ll Meet Again.”

This pandemic has brought about the same sense of camaraderie and we’re-in-this-together spirit among senior royals and her direct heirs. That George is making his debut now, solo, is not surprising: his wonder at the football phenomenon is all of us, finding hope after a period of darkness. But his future success rides on what Kate, and Kate’s supportive family, brings to parenting this future king: families go through the good and the bad together, but George will someday have to shoulder the weight of the emotions of the country. Having the experience of solid family behind him will make the difference in how he is raised to handle those duties, and the village that supports him doing it will matter greatly.

From Chatting Cruella With Emma Thompson to Fashion Diplomacy, All the Details on William and Kate’s Royal Tour of Scotland