From Tik Tok Realness to Clever Quips, Queen Elizabeth Has Charmed Her Way Into a Viral Moment 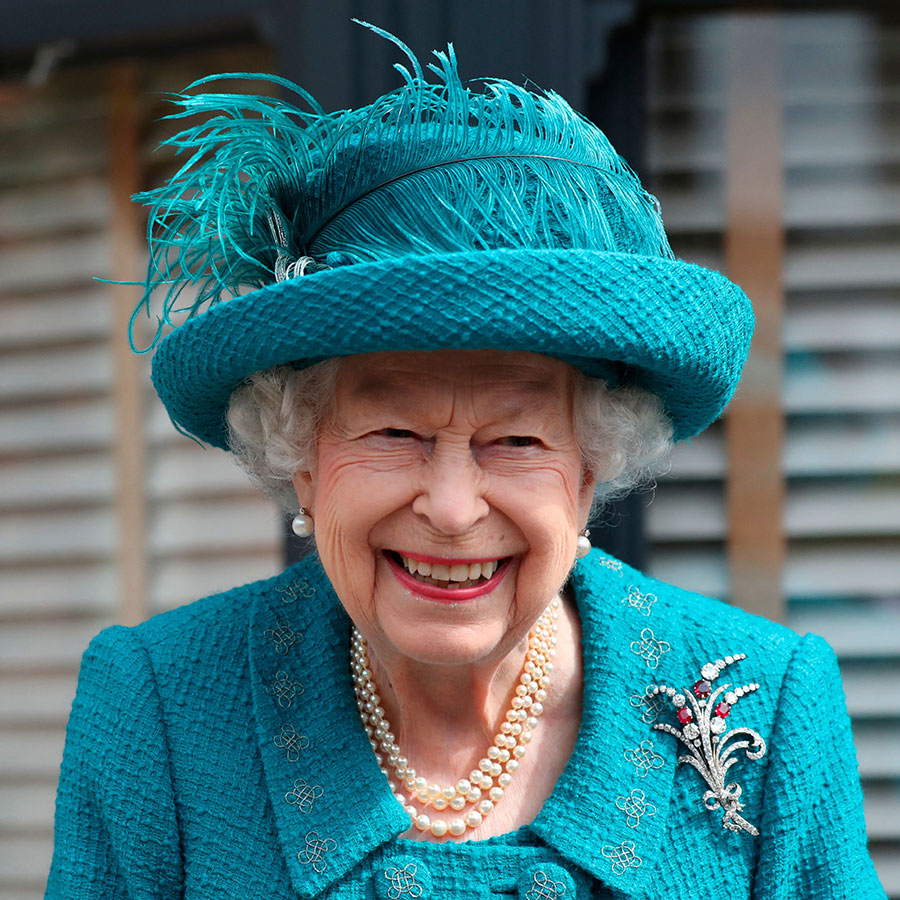 Queen Elizabeth, seen here visiting the set of the long-running television series 'Coronation Street' in Manchester, is having a bit of a viral moment with TikTok users recently catching on to her quick wit and charm. Photo: Scott Heppell/AFP/Getty Images

Her Majesty Queen Elizabeth has been killing it on social media lately. In back-to-back viral moments, Tik Tok and Twitter users have been celebrating her funny side this summer while she holidays at Sandringham.

Indeed, since she emerged from the brief, traditional period of mourning following the death of her husband, Prince Philip, in late April, the Queen has been back in the saddle, and in notable good humour. She joshed around with the G7 leaders in Cornwall, making the crack, “Are we supposed to look like we’re having fun?”

Later the same day she had another viral moment while cutting a cake with a sword. All in all, you could say the Queen has her groove back.

Her new Tik Tok moment is a gem unearthed from a 1985 portrait session with painter Rolf Harris. She jokes about “getting old before her eyes.” He asks if this bothers her. She zips back with an uncharacteristically casual “Nah.” This, of course, is a perfect moment for the GIF treatment, which jumped off Tik Tok and into the broader media, because she sounds, in the words of one of loyal subject @arksteriff, “like every bloke in the UK. Can’t get over the Queen saying nah.”

The week before, the Queen was trending on Twitter with a clip plucked from the 1992 documentary Elizabeth R. In it, Queen Elizabeth (along then-still-married Charles and Diana) mingles with another lot of G7 leaders at a Buckingham Palace reception. She is seen beaming and giggling and speaking rather posh, confident French. She makes a dry retort, telling former prime minister Ted Heath he was now “expendable.” She later speaks about an unnamed man, asking, in an unintentional echo of a Seinfeld moment, “I mean, I wonder if he is master of his own situation?” Commenters marvelled at how witty and deft the Queen was, though a few pointed out how unfortunate that men of that era insisted on talking over her at times. How could anyone be so rude, really?

That these are archival clips taking off again in a new format shows the public is following the Queen’s lead here. The same as we needed to see her steady hand and hear her voice when she addressed Britain and the world during the darkest early hours of the coronavirus crisis in the spring of 2020, so too do we now need to see her jolly again.

It reminds us of how the Queen’s sense of humour has cut through the rigidity of even the most formal of interactions. There was the scripted moment she pulled off beautifully in 2012 when she filmed the famous scene with Daniel Craig as James Bond — as she matter-of-factly accompanied the super spy through Buckingham Palace with corgis swarming underfoot. Through the magic of movies they were seen to jump into the Olympic opening ceremonies via parachute as she walked out onto the stage to rapturous applause.

Among other notable funny bone moments — there are many lists of these on the internet, by the way, which shows you how much people love to see the stoic Queen break the fourth wall — there was that time she declined to sit on the Iron Throne whilst touring the Game of Thrones set in Northern Ireland circa 2014 during filming of the HBO megahit. (She had good instincts there to laugh it off — she must have known had she taken that photo op it would have broken the internet.) And we’d be remiss if we didn’t mention the time in 2016 when the Queen participated in a social media tussle between President Barack Obama and first lady Michelle Obama after they posted a video  challenging Prince Harry to the Invictus Games. Kensington Palace responded with their own video tweet featuring Prince Harry and the Queen herself. The rebuttal shows the Royals watching the Obama video, to which the Queen responds, with a dismissive chuckle, “Oh really, please.”

Another classic snap was in 2006 when she did the traditional Sovereign’s Parade at the “passing out” or graduation ceremony at Sandhurst military academy. One of the grads that year was her grandson Harry. We don’t know what she said to him as she passed by his place in the lineup of saluting soldiers, but it caused him to break into a grin. Indeed, it is in photos with her family that we most often see the Queen’s face light up.

The Queen is modernizing the monarchy, and has followed the younger generations of her family online, embracing technology especially during the pandemic. The new outreach allowed for the youth of Great Britain to be a part of her upcoming Platinum Jubilee in 2022. It was announced this week that 19 year-old graphic design student Edward Roberts’ design of an emblem for the festivities — set to take place next June 2 to 5 — was chosen the winner of a competition, held in conjunction with the Victoria and Albert Museum.

After all, the Queen must know that connecting with younger subjects at home and all around her beloved Commonwealth is the key to maintaining the status and health of the monarchy. A few GIFs of her being funny — and touchingly, relatably, human — will go a long way towards accomplishing her goal. It is reassuring for all of us that it feels like she has come out of a major life crisis —the death of a spouse, especially one from such a long and happy marriage —with her wit and enthusiasm intact.