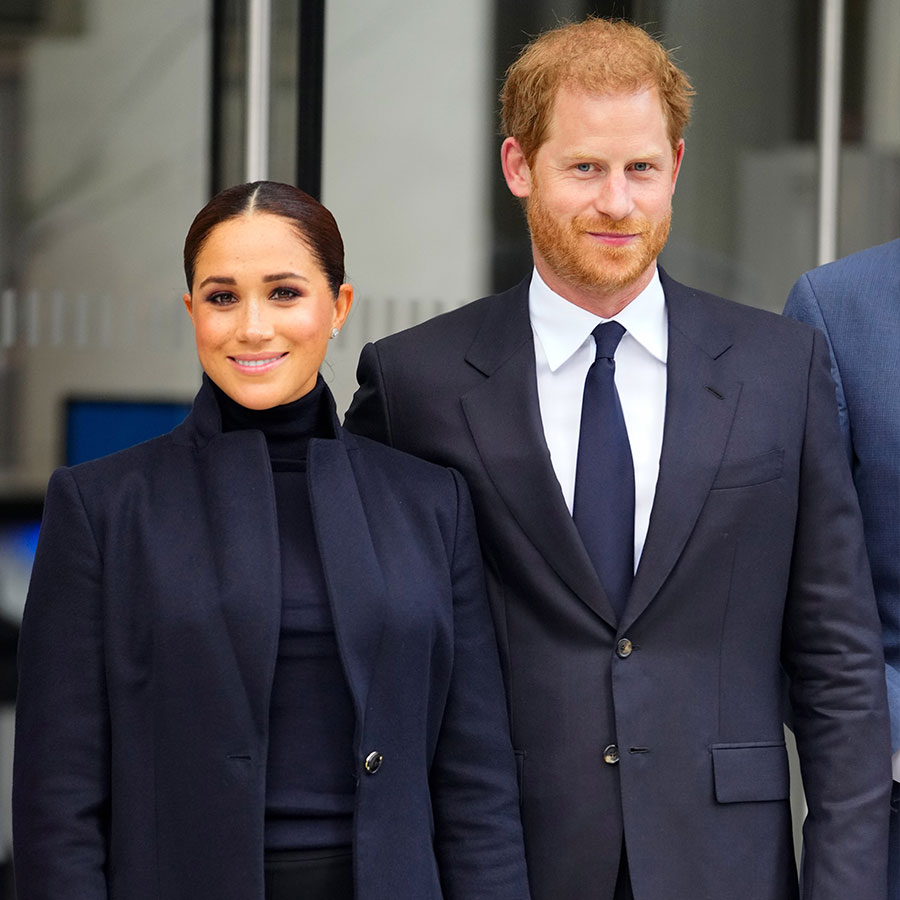 Prince Harry and Meghan Markle, Duke and Duchess of Sussex, visit 1 World Trade Center on Thursday, the first stop on a royal-like tour of New York City that's seen them meet with the Governor of New York and visit a Harlem school. Photo: Gotham/GC Images/Getty Images

UPDATE: Watch Meghan and Harry speak at the Global Citizen Live speech on Saturday (below). Prior to this event, the couple met with U.N. Deputy Secretary-General Amina Mohammed to discuss issues such as vaccine equity, climate action, the economic empowerment of women and mental wellbeing.

SEPT. 24: Prince Harry and Meghan Markle Take Manhattan in Their First Major Joint Public Appearance Since Moving to the U.S.

The Duke and Duchess of Sussex marked the end of their paternity and maternity leave break with a Manhattan-sized bang. Leveraging the coup of their being on TIME’s “100 Most Influential” cover last week, Harry and Meghan arrived in New York Thursday to a diplomatic welcoming committee worthy of a royal tour.

The now-private citizens and California residents were greeted on arrival at the observatory from the 102nd floor of One World Trade Center in the morning by a powerful political phalanx: newly minted New York Governor Kathy Hochul and New York City Mayor Bill de Blasio, plus his wife, Chirlane MacCray and their son, Dante.

The Sussexes are primarily in town for Saturday’s Global Citizen Live 24-hour broadcast event in Central Park that will feature performances by Coldplay, Lizzo and Jennifer Lopez.

The organization announced Harry and Meghan’s participation was a continuation of “their urgent work with world leaders in the pursuit of vaccine equity to end the COVID-19 pandemic for everyone, everywhere.” Harry had previously appeared with other celebrities at the Vax Live event in May, a charity performance to aid the international vaccination effort.

As part of their NYC tour, the couple also reportedly met with Chelsea Clinton at the World Health Organization to discuss the global vaccine situation.

After leaving the World Trade Center, the couple paid their respects to the victims of 9/11 at the memorial reflecting pool, then went into the museum for a tour. Meghan wore a monochromatic outfit — navy trouser, turtleneck and coat — in what is swiftly becoming her new, post-palace signature look. The Duchess was roasted by some — primarily the British tabloids, who always have their poison pens drawn for the couple — for wearing such a warm outfit on a day that reached 26 C.

On closer look, though, the coat itself was of a lighter, fall fabric than it first appeared on television screens. Information about labels the Duchess was wearing was not immediately forthcoming, unlike the past when the Palace would confirm labels.

But Instagram site @meghansclosetchronicles did a good job of amalgamating what info was out there: the coat was “possibly” Emporio Armani. The turtleneck was  minimalist label The Row, by the Olsen twins. The long, boot-cut pants that puddled on the ground above sharp-toed Aquazzura pumps remain unidentified. (Tabloids also reported that Meghan’s friend – and one-time style guru – Jessica Mulroney, had coincidentally posted videos from Times Square , and Meghan’s wedding makeup artist Daniel Martin was in the Big Apple.)

With a quick change to a bare-legged look, Meghan and Harry went on to meet with the U.S. ambassador to the UN, Linda Thomas-Greenfield, a Biden appointee. For this occasion, Meghan donned a classic Max Mara camel coat over a turtleneck with a black pencil skirt. This outfit hearkens back to a classic photo of Princess Diana in the same colour scheme, arriving at The Carlyle, the same hotel that Harry and Meghan are staying on this trip.

No one pays much attention to the clothing of royal men but, for the record, Harry wore a suit. These are, after all, appointments that are meant to be all business, especially now during Harry and Meghan’s “new era of visibility,” a phrase coined by Omid Scobie, who co-authored Finding Freedom, the couple’s biography.

Through their Archewell Foundation, Harry and Meghan are focusing their philanthropic efforts on in-person appearances on behalf of causes they favour. The topics covered during the meeting with Thomas-Greenfield reportedly included COVID-19 and racial and social justice.

On Friday morning, Meghan – who wore another monochromatic outfit, this time in red – paid a surprise visit with Harry to an elementary school in Harlem, where they read from the Duchess’s book, The Bench.

The couple’s off-duty hours are also being documented. Not only is their hotel, The Carlyle,  a favourite of Diana’s, it is also the preferred Manhattan roost of U.S. presidents – a half-dozen have holed up there, including JFK (who is rumoured to have snuck up Marilyn Monroe on the service elevator) – and rock stars, from Jagger to Bono. They couple have been photographed in the hotel’s famous Art Deco Bemelmans Bar, with old pal, Misha Nonoo.

The coverage of the couple’s trip is heavy – New York is America’s media hub and, since the Oprah interview, the couple’s fame has skyrocketed. The British press are also following along closely, and the Daily Mail appears to have a battalion of reporters on the case. Tabloid snipes include pieces on Harry’s thinning hair (as opposed to the thickness on that TIME 100 cover), his attaché case (labelled as Archie’s Papa), the gas-guzzling SUVs which these environmental activists are using to get around, and the rumoured Department of Homeland Security bodyguard tailing the couple for their safety.

The Duke and Duchess are, in a word, polarizing. The way they are designing and pursuing their post-working royal life – as quasi royals and international celebrities – means they have one foot in media content production and the other in philanthropy, which is, in turn, covered by news media.

It’s an ambitious master plan. But one thing is for sure: they are following through on their promise to try to make a difference. And hopefully they can enjoy some of the perks of normal (albeit famous) folks that they couldn’t when the were working royals: things like having a drink in a bar with old pals. When you think of the flak Meghan took for her starry baby shower in Manhattan, or the swift trip she took to watch her friend Serena Williams play in the US Open, you can see how they must be savouring their newfound freedom to craft their own kind of half-in, half-out dance – doing good and pursuing paying work.