Hazel McCallion, 100, on the New Exhibit About Her Life and Why She’ll Never Retire 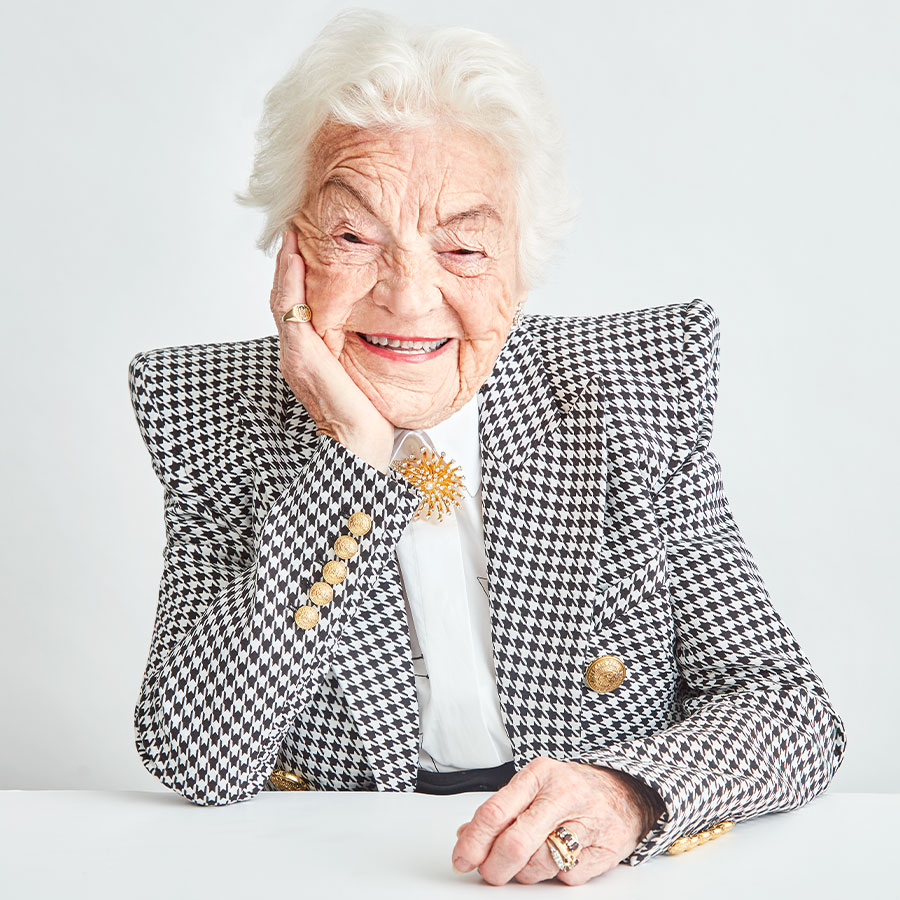 Former Mississauga mayor Hazel McCallion is being honoured with a new exhibit, "Hazel: 100 Years of Memories," at Erin Mills Town Centre. The Art Gallery of Mississauga exhibit includes images of McCallion shot for Zoomer's 2019 cover story with her, like the photo above. Photo: Chris Chapman

Ahead of the 11 a.m. ribbon cutting ceremony for the new Art Gallery of Mississauga Hazel McCallion exhibit Hazel: 100 Years of Memories on Tuesday — marking her 100 years of life and almost as many years of public service — the centenarian of the hour pauses to speak with Zoomer via Zoom. At the appointed hour, a cheerful “Be right there!” chat bubble from her appears on screen.

When she sits down at the chair in her home office and turns to stare down the camera, she is exactly as promised by the many profilers of her long and illustrious life: the embodiment of no-nonsense. There’s no soft memory lane strolling with Hazel — she still eats reporters for breakfast.

She does not, thank you very much, care to drill down on her choice of red jacket (“I like bright colours, red and yellow”) or the brooch she has chosen to wear to Hazel McCallion Day at Erin Mills Town Centre, where the interactive exhibit remains on display until February 2022, showcasing the entirety of her life, in the words of organizers, and her various roles as “daughter, wife, mother, athlete, businesswoman, humanitarian, politician, mentor.”

Woe is to be the careless soul who has not done her homework for a sit down with Hurricane Hazel, mayor of Mississauga for 36 years, the firebrand who transformed the city to Toronto’s west from farmland to bustling metropolis, business centre and residential family mecca.

Brooches are McCallion’s signature fashion accessory (in the manner of, say, Ruth Bader Ginsburg and her signature neck cuffs). “People just started giving them to me,” she says. “Just last week I was given a gift: it’s a brooch!”

I was forewarned by reading many profiles of McCallion that homework — diligent preparation for battles with council, developers or any of the several boards she still sits on, including the airport board and various medical and technological concerns — is her thing. Two years ago, then aged 97, she turned down Doug Ford’s offer of a patronage appointment as a special advisor on housing (with a hefty salary), saying at the time, “Unfortunately due to my extensive commitments, I am unable to accommodate the extensive time for such an appointment at this point in time.” You go, girl!

A few short months after that, after she’d turned 98, she appeared in person at the Zoomerplex in Toronto’s Liberty Village to unveil her own cover of Zoomer magazine — an event also attended by the Hon. Elizabeth Dowdeswell, Lieutenant Governor of Ontario. (Photos Zoomer shot of McCallion for the cover story also appear in the exhibit.)

Back on our Zoom call, McCallion points to the large plastic bins around her feet, evidence of the work the team, led by curator Madeleine Van Duzer, have done in gathering personal artifacts to display.

“My house is pretty empty,” she says. Never one to take credit unduly, she adds: “I didn’t do any of the work.”

The narrative of the exhibit begins with her Quebecois roots. “They have done an excellent job telling the history of my life, going back to when I was born on the Gaspe coast, Port-Daniel.”

Highlights from the exhibit include a framed photo of McCallion at a salmon fishing derby with Rob Ford; she had a fish on the line, and the camera caught Ford hanging onto her to keep her from falling into the drink. There is also her first mayoral desk, from 1968, when she was elected mayor of Streetsville, Ont., and a lawn sign from her first run at the mayoralty of Mississauga. She won with the slogan “A Better Mayor,” against a guy who used the slogan “A Good Mayor.” She never used a lawn sign again.

“Do Your Homework” is, it turns out, her unofficial life motto and was turned into a slogan, as seen on a vintage poster in the exhibit, of Hazel in an orange suit and scarf, hands on hips below her signature message (and warning to all who engage with her).

On being long lived and the secrets she has to share about how she achieved the century milestone, McCallion is typically crispy. Staying fit, she says, “is just good sense.”

A lifelong athlete, she says, “I began playing hockey when I was a kid in Port Daniel.” In Montreal, she recalls, she joined a women’s hockey team. When her job transferred her to Toronto in 1947, she says, she had to quit. as there were no women’s hockey leagues here at the time. But when the Ontario Women’s Hockey Association started up, she became involved with the organization, “the only one of its kind,” as she says now. She still keeps an office there at their Mississauga headquarters.

Working, of course, is reflex for her. “It is a determination,” she says, “to do as much as you can for the short time you are on this Earth.” When she turned 100 this past February (she was a Valentine’s Day baby), it didn’t phase her. She says now, “Look, you just go from age to age — 100 is just another number.”

The last word goes to Hazel, whose 2014 autobiography is, after all, called A Life with Purpose. “I’m not retired,” she told the crowd assembled at the ceremony later, “and I never plan to.”

10 Things You May Not Know About Madam Mayor