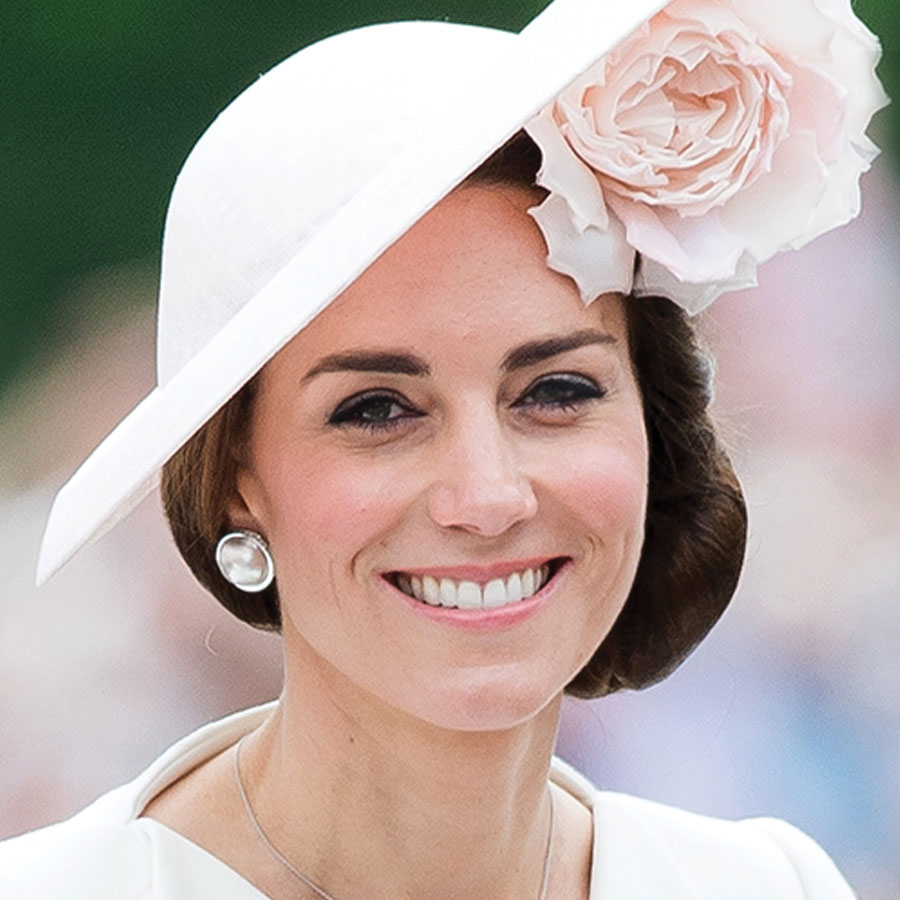 The duchess, pictured here during the Trooping the Colour, June 11, 2016 arrives at this milestone birthday as a poised Queen-in-waiting, having spent the past year very much rising to every occasion. Photo: Samir Hussein/Getty Images

Catherine, Duchess of Cambridge will celebrate her 40th birthday this Sunday, Jan. 9, no doubt in muted fashion in observance of the perils of the current Omicron wave. The duchess arrives at this milestone as a poised, elegant Queen-in-waiting, having spent the past year very much rising to every occasion.

Kate stepped up her commitments as the Queen has suffered ill health and a period of mourning for her late husband last year. She supported Prince William behind the scenes as he privately dealt with the ongoing public feud with his brother. With her ready smile and charm for the crowds and an array of high-profile solo initiatives (not to mention her smashing wardrobe) she helped to distract from the shadow Prince Andrew has cast over the monarchy with his ongoing sex scandal.

With the pandemic now raging on for two years, Kate has been more than a ribbon cutter. With her photogenic children, she has lead the charge in lifting the national spirit, such as her Zoom and in-person thank you’s to frontline workers. She has also sprung into action on the sports field and in the arts. Kate showed impressive form in a match up with young British tennis sensation Emma Raducanu. She performed at the piano — another of her rather fabulous hidden talents — for the televised carol service she hosted this past Christmas at Westminster Abbey. Several of her long-term projects, a decade in the making — her mental health initiatives and her early childhood focus — have come to fruition at a fortuitous time this year.

But if there is one moment that marks Kate’s transformation this year as complete it is the instantly iconic Chris Getty image of the duchess as seen through the window of a car en route to the funeral of the Duke of Edinburgh in April 2021. Only her eyes are visible above her custom black mask and below her black veiled hat: they are piercing with gravitas. This is a woman at the height of her beauty and fully aware of what she chooses to project. It is a grand fashion coup, too: a stunningly fitted Roland Mouret dress finished with pearls. But with layers: that multi-strand Garrard pearl choker was as symbolic as it was beautiful; it was borrowed from the Queen’s collection, and once worn by Diana, Princess of Wales. It was a clear sign of confidence in Kate, from the Queen.

Even a few years ago, Kate dressed older than her age: the safe, monochromatic coat dresses were appropriate, but a bit, well, boring. The new confidence Kate has been bringing to her duties has been accompanied by a deft style offensive, a tweaking of her classic wardrobe to add more fashion nods, and a more daring edge and slimline silhouette to her look. Chic comes from the inside, and this new poise suits her, and her elevated position in the Royal Family, very much. Think of THAT golden dress that she wore at the Bond No Time to Day premier in September 2021.

It feels like a long time now that Kate Middleton has been in the public eye. We first met her circa 2002, in her sophomore days at St. Andrew’s as the classmate of Prince William, in that filmy toga dress she wore to walk the runway in a student fashion show. She became the roommate who became something much more. The early years of their courtship were marked by shots of the pair on nights on the town (Bouji’s nightclub was a particular favourite of the duo and their tight circle of friends). Kate was still wearing jeans and cute little going-out tops in those years (most notably during the couple’s short breakup in 2007, when she was snapped often by paparazzi). Through the years leading up to William’s proposal in 2010, Kate endured much teasing in the press, where she was dubbed Waity Katy and her commoner, middle class Buckleberry, Berkshire, background was picked over by armchair critics.

The couple celebrated their 10th anniversary this past April. Kate’s bridal look — or Catherine’s, as she was renamed after her marriage — was the first hint of the sophisticated image she was hoping to grow into. Her Alexander McQueen lace gown was sophisticated and fashion-forward, even as it was also perfectly appropriate. It is now the gold standard for royal brides: what she got right was its timelessness. For as beloved as Diana’s poufy dress was (and is), it now reads eternally ’80s, frozen in time. Instead, savvy Kate took a page from the Queen on playing the long game for her first big fashion statement as a royal.

The new Duke and Duchess of Cambridge then wisely paced themselves. Royal commitments are for life, and they made sure to enjoy the early years of their family. William was born for the role but having seen the negative effects of the pressure of such an intense spotlight on his mother, he gave Kate time to learn the ropes and explore how to build her role into she what she wanted it to be. They moved to Anglesey, Wales, to begin their marriage in private. But the break was not long: Kate was dubbed Duchess Doolittle and William, having stepped away from royal duties temporarily (to work as a search and rescue helicopter pilot), was also under pressure to return, soon enough.

As their first two children arrived, they tried to bridge the two worlds by retreating to Anmer Hall, their country home in Norfolk. Kate decorated herself and did the shopping in the local village. In those new-mom years, Kate was understated in her approach to fashion, most notably paying direct sartorial tribute to her late mother-in-law, with her maternity wear at the traditional Lindo Wing photoshoot, where she introduced her children to the world from the steps of the hospital.

When they moved back to London to live at Kensington Palace, it marked the end of the duchess’s idyll as (mostly) stay-at-home mom. It also shushed the criticism of her for not taking on the duty schedule of a senior royal.

The past few years have seen her steadily up her game as she built her portfolio of causes with high-profile projects, from the  Early Years study and national initiative to shed light on how early childhood affects adults  to her Holocaust survivor portraits (showcasing another talent of hers) to the pandemic photo history Hold Still and a continued commitment to mental health supports. It was recently revealed that she was a driving force behind the Heads Together initiative created by her, Princes William and Harry 2019.

The stormy years where the Sussexes and Cambridges shared the spotlight seem long ago now, pushed into the past by the long pandemic saga. Without the push-pull of duchess pitted against duchess by the tabloid press — a truly infantile and outdated plot line supposing women are all at each other’s jugulars — Kate has risen above by keeping calm and saying nothing. She also illustrated an ability to pivot — a key quality exemplified by the Queen, who has had to adapt frequently during her long time on the throne traversing so many eras and fashions and shifting cultural norms. As the Sussexes left the building, the Cambridges picked up some of their clever social media devices — videos, interactive elements — as well as some of the more intimate reveals, albeit done Cambridge-style. Think of the charm offensive Kate led across social channels when they released the video frolicking on the beach or the very clever release of behind-the-scenes photographs of William and Kate showing highly unusual PDA at the Earthshot Awards, the prestigious environmental initiative William launched with famed broadcaster and historian David Attenborough in October 2020.

An interesting thing happened over New Year’s, which give Kate more time to develop before she becomes Britain’s next Queen.  Camilla, who was never expected to be given the title of Queen when Charles ascends to the throne was elevated in a manner that signals a change of status to come. Camilla was made a Royal Lady of the Order of the Garter on the Queen’s honours list. This is the most senior knighthood in the realm and goes back 700 years to the days of Edward III, given in recognition of great public service to the Crown. It elevates her to the status of other senior Royal Family members who are also members the Order: Prince Charles, Princess Anne, Prince Edward, and the Duke of Cambridge. This honour, combined with her having been named to the Privy Council in 2016 (serving alongside Charles and William), prompted top royal pundits to predict that this is the way the Queen is indicating that the Duchess of Cornwall will indeed serve as the Queen Consort when Charles becomes King.

This shuffle in expectations marks a big change in fortunes for Camilla, once the homewrecker villain in the War of the Wales and among the least popular members of the family. Today, she is seen as a stalwart of duty to Queen and country, likewise Kate’s commoner, middle-class values are now seen as a steady and strengthening force for the scandal-hit Royal Family. In fact, Kate was first seen wearing the blue sash of Royal Victorian Order in 2019, which was given to her by the Queen in recognition for her years of service as a working senior royal. The year before she was also given the yellow badge of the Royal Family Order as a reward for her service.

Kate has learned well from Camilla’s example, as well as the Queen’s, of course. She has not taken the bait, ever, and not deigned to let her own actual feelings show in public. In this way even the minor scandals attached to her — her Doolittle days, or her naughty uncle or that nude, smoking sunbathing photo in France, even the Cambridge’s rumored marriage troubles — failed to “stick.”

Kate has learned well to keep calm and carry on, and now at 40 she has that highly impressive and useful gravitas stare down, too.