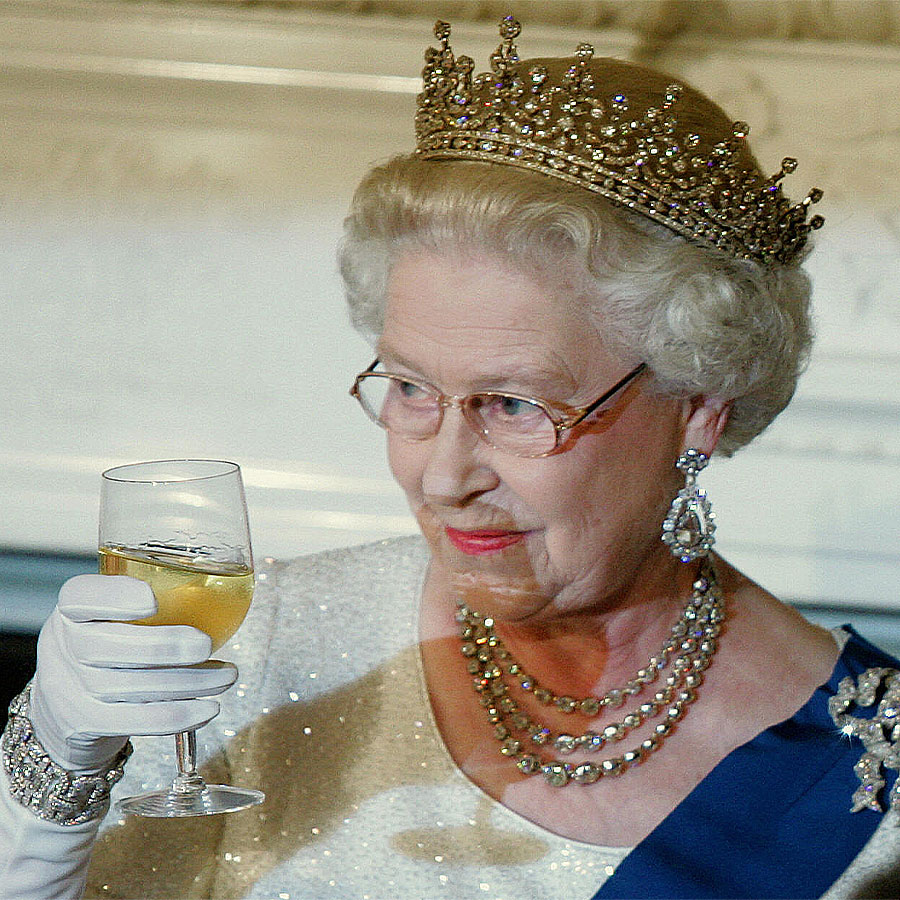 You’ve probably heard that HM Queen Elizabeth II is being advised to take it all down a notch. But Her Majesty, sworn to a life of service, keeps going at full throttle – and we love her for it.

But as she approaches 96, with the very busy schedule that a jubilee year holds, her doctors are recommending she scale back on some things, including her three-times-daily tipple.

We’re not sure if she’s chosen to forego her glass of Champagne (at 96, would you?) or her Gin and Dubonnet, the favourite refreshment of The Queen Mother, but nobody is stopping the Queen from promoting all things made in Great Britain.

To wit, the Royal Collection Shop has launched the Platinum Jubilee Special Edition English Sparkling Wine. The Firm is no stranger to English bubbles, as Kate and Wills also served a Brit sparkler at their wedding reception. When I was in England pre-pandemic, I had the opportunity to try some – it was lovely and dry, not cloying as some sparkling wines can be.

According to the Royal Collection, this sparkling wine is a “classic blend of Chardonnay, Pinot Noir and Pinot Meunier, made exclusively from fruit grown and hand-picked in vineyards in Kent and West Sussex.” The area is now seeing greater yields in the quality of wine-making grapes (due to either global warming or better wine-making practices), not unlike those in the Champagne area of France.

But true royal memorabilia collectors will keep the juice in the bottle, and appreciate its packaging. The label, according to the Royal Collection site, takes its inspiration from the gold embroidery on Her Majesty’s Robe of Estate, the robe Elizabeth wore on her Coronation Day in 1953. The design is rounded out with a crowned EIIR cypher, surrounded by golden olive leaves and ears of wheat, which represent peace and plenty.

So great is the demand for the wine, it’s only available for delivery to the U.K., Germany, Australia and New Zealand (don’t ask me why Aus but not Canada), so ask a Brit friend to order one and put it on ice for your next trip across the pond.

Meanwhile, at Her Majesty’s Sandringham Royal Estate gift shop, dog-lovers are in for a treat. The Queen, with Norfolk-based perfumer Norfolk Natural Living, has launched a fragrance for man’s best friend, Happy Hounds Cologne (£9.99).

Meant to be sprayed on your freshly bathed pooch, it is part of the Queen’s Happy Hounds line, which also features dog shampoo and dog treats (made with venison from the estate, no less. The scent is called Coastal Walks. Norfolk is known for its rugged and beach-laden coastline, so very apropos. Rule Britannia.

“My Strength and Stay”: The Queen&#8217;s Walking Stick Is a Poignant Tribute to Prince Philip