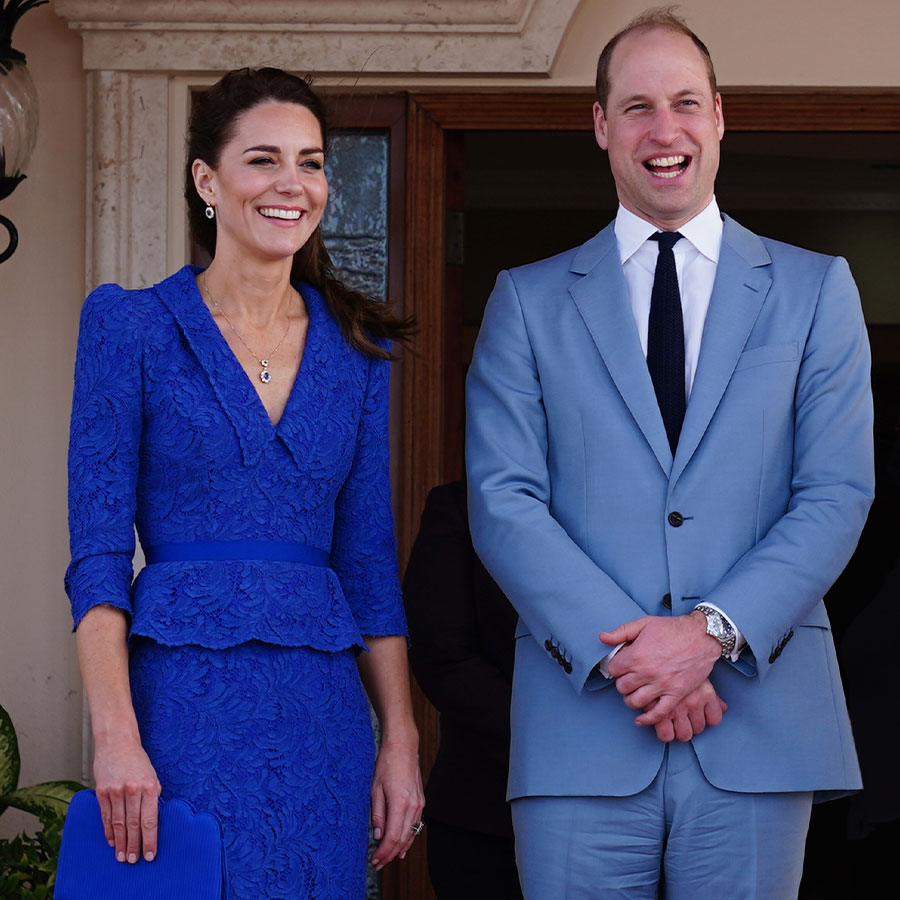 Catherine, Duchess of Cambridge and Prince William, Duke of Cambridge in Belize City, as they begin their royal tour of the Caribbean on behalf of the Queen to mark her Platinum Jubilee. The eight-day tour is their first joint official overseas tour since the onset of COVID-19 in 2020. Photo: Jane Barlow/Pool/Getty Images

William and Kate’s Caribbean tour kicked off Saturday with their arrival in Belize. The first leg of their three-country Platinum Jubilee tour of the islands on behalf of the Queen will see them head to Jamaica Tuesday, then on to Bahamas Thursday through Saturday. This marks the couple’s first tour abroad since the COVID-19 pandemic began.

The immediate focus of coverage for most royal tours is always fashion, and Kate did not disappoint. The duchess has been wearing royal blue (with a touch of yellow) lately, in a subtle nod of support to Ukraine. But she also usually begins to preview the colour themes of her tour outfits in the official events the week ahead of tour. Her wardrobe, especially for tours, is planned out months in advance — and the Ukrainian-flag dressing flowed into a tribute to the flag of Belize, in the same bold blue.

For the arrival shot on the tarmac atop the stairs of the RAF plane they arrived on, Kate wore a very familiar silhouette: her Jenny Packham two-piece blue suit was made of lace, with a soft peplum. The Duchess almost always chooses a fitted skirt suit for arrivals at the start of a tour; the formal daywear worked particularly well in this case as she and William went on to meet Belize’s prime minister, Johnny Briceno and his wife, Rosanna. For his part, William eschewed his usual dark suit for a more tropical-friendly light blue number.

The first day of the tour went offside as stories about a protest on the ground shuffled Sunday’s tour schedule. Indigenous groups protested the helicopter arrival of the duke and duchess that was set to take place on a football pitch in Indian Creek for a tour of a sustainable cocoa operation. The Indigenous Mayan protestors, who held up signs reading “colonial legacy of theft continues with Prince,” according to Omid Scobie, royal correspondent for Harper’s Bazaar, cited a dispute over the field with a charity, Flora and Fauna International, of which Prince William is patron. At dispute is that the village elders were not consulted regarding permission to land in the field.

But the issue goes deeper than that, of course. The reason the Queen sent her most glamorous emissaries — the young heir to the throne and his beautiful and popular wife — to the Caribbean right now is to shore up support for the monarchy in a region deeply affected by the former empire’s colonial past. After Barbados chose to remove the Queen as its head of state last year, popular sentiment for the monarchy across the region is in flux.

Royal tours can make a measurable difference in quelling republican sentiment. Remember how Diana, the new Princess of Wales charmed Australians on her tour with Charles in 1983? The fist-pounding for separation from the monarchy died down to a murmur after she wooed citizens Down Under with her easy smile, warm outreach and high-wattage celebrity factor. Then there was Harry’s trip to Jamaica on behalf of his grandmother in 2012. Things were heating up in Jamaica at the time, with then-brand-new Prime Minister Portia Simpson Miller calling loudly for Britain to apologize for the “wicked and brutal” legacy of slavery on the island and replace the Queen as head of state. The Times of London reported this quote in her inaugural speech, “I love the Queen, she is a beautiful lady,” but concluding in Jamaican patois she should be removed as head of state: “I think time come.” And yet, she couldn’t resist giving young Harry a great big hug when she met him. Later, Harry won more hearts when he raced alongside the country’s golden track star, Usain Bolt. Republican talk has faded in Jamaica since that juncture. Indeed, Harry’s winning ways in Jamaica must make the monarchy yearn for what might have been had he continued as a working royal, the diplomatic strides he could have achieved on behalf of the Crown with biracial wife Meghan by his side, their union so symbolic of what a diverse future could become within the Commonwealth.

Yet the Indian Creek protestors were a stark reminder of the uphill battle the young royals face in rebuilding ties with the Commonwealth nations of the region.

Landing the helicopter on disputed grounds “without permission” became a flash point. The duke and duchess, however, are expected not to comment on any political issues of any kind. The official response from Kensington Palace on the matter read simply: “Due to sensitive issues involving the community in Indian Creek, the visit has been moved to a different location.”

Sunday instead began with a trip to a different cacao plantation, where Kate and William were all smiles up to their elbows at grinding cacao nibs. Kate took her look more casual for the day’s trio of events, wearing a Tory Burch sundress of a deep-blue ground with yellow, white, red and green in the sunny pattern. She paired the elasticized top and ruffled-hem dress with big, bold, blue Sezane earrings and her favourite casual sandals: straw wedge espadrilles by Stuart Weitzman. This outfit carried her through a long day, including a private meeting on the country’s biodiversity.

For the third event of the day, William, in blue linen shirtsleeves, joined his wife on the “dance floor” of a community centre in Garifuna. These kinds of photo ops are eaten up by the tabloids back home, as they show the royals being somewhat goofy, which is a stark contrast to the usual staid and posed photographs we see of them on duty. William was clearly Dad dancing, which is what is expected of a father of three on the eve of his 40th birthday. Kate, whose dress really did fit in with the yellow ceremonial festival outfits worn by the community members, fit in much more gracefully, again as expected. She even gave the audience there and back home a small hint of intimacy, shimmying towards her husband of nearly 11 years, leading commenters in England to speculate cheekily about her desire for a fourth child.

But this trip is far from a vacation, as they will be heavily scheduled through the eight days. On the horizon are more visits that will fall into their official areas of interest, from child development for Kate to environmental and mental health initiatives for William. But the main goal for this tour — and upcoming Commonwealth tours by Prince Edward and the Countess of Wessex (Antigua and Barbuda, Grenada, St. Lucia, St. Vincent and the Grenadines) and Princess Anne, who will tour Papua New Guinea with her husband, Sir Timothy Laurence.

The Queen herself has dedicated many tours to the region, beginning with the massive Commonwealth Tour she undertook in 1953 at the beginning of her reign. She has returned many times since, but is leaving the charm offensive to her new royal A-team in this Jubilee year.