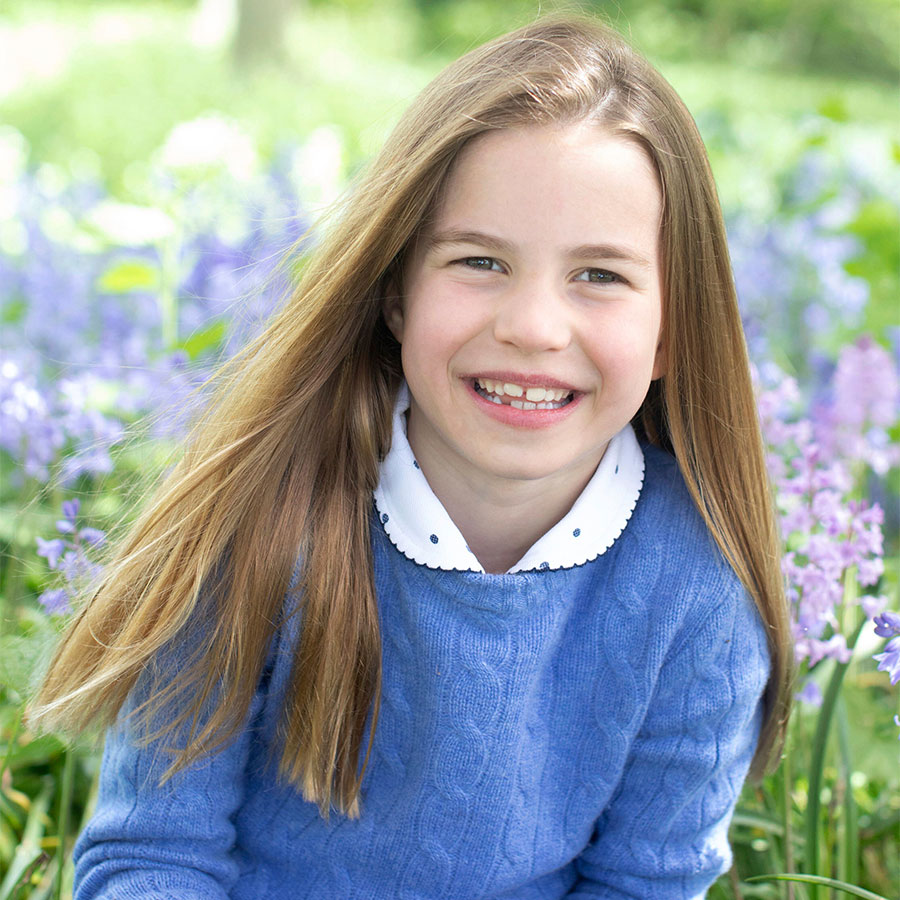 Prince William and Catherine, Duchess of Cambridge have shared a series of new photos of their daughter, Princess Charlotte, in honour of her seventh birthday today. The portraits, captured by the duchess, were taken at Anmer Hall, the family’s country home in Norfolk.

In the sweet snaps, Charlotte — who is wearing a cornflower blue cable-knit sweater by Ralph Lauren  — is all smiles as she sits in a meadow among spring bluebells. In one, she hugs the family’s beloved black cocker spaniel, Orla. The pup, whose name wasn’t revealed until now, joined the family in 2020 and was a gift from Kate’s brother, James Middleton.

Queen Elizabeth, as well as Prince Charles and Camilla, Duchess of Cornwall, took to social media to wish Charlotte a happy Birthday.

Birthday photos of the Cambridge kids have become a much-anticipated tradition among royal watchers. A talented amateur photographer, Kate is also patron of the Royal Photographic Society, a role previously held by the Queen for 67 years. Recently, the duchess also channeled her passion for photography into Hold Still, a book of 100 portraits submitted by Britons documenting life during the coronavirus pandemic.

Charlotte is a great-granddaughter of Queen Elizabeth II. She is fourth in line to the throne, behind her grandfather Charles, father William and older brother George.

With the birth of her younger brother, Prince Louis, in 2018, the young princess became the first female royal in history to keep her rank in succession, instead of dropping back a place behind a younger brother. This was due to a change of succession laws in the U.K. that were updated shortly before the birth of Prince George in 2013, which would allow for a first-born daughter to take precedence over any younger brothers. This decision changed a 300-year rule that the heir to the throne would only pass to a daughter in the complete absence of sons.

Album: Some of Our Fave Photos of Princess Charlotte Over the Years The sweet sixth birthday portrait was released soon after Kate and William’s milestone 10th wedding anniversary, when they shared a never-before-seen family home video of Charlotte, along with her brothers George and Louis, as they went on a nature hike in Norfolk. The video, shot by Will Warr, was filmed in the autumn of 2020.

Charlotte, with her usual spirit, is seen playfully wrestling with her father and running with her siblings, with playtime including a segment of the princess with baby brother Louis on a teeter totter. The clip ends with the royal brood roasting marshmallows at a bonfire.

For her fifth birthday, the palace shared photos of Charlotte and her siblings delivering homemade pasta and bags of groceries to retirees living in COVID lockdown near the family’s Sandringham estate. In this series of portraits, she is wearing a blue and white houndstooth dress from Zara. Also in honour of Charlotte’s fifth birthday, Queen Elizabeth shared a stunning family portrait taken by famed photographer Annie Lebovitz for the Queen’s 90th birthday, in April 2016. Charlotte, who is the Queen’s fifth great-grandchild, is seated in Her Majesty’s lap. Other images show the young royal with Prince Philip at Trooping the Colour in 2017, and the princess as a flower girl at Princess Eugenie’s wedding on Oct. 12, 2018. For her fourth birthday, the palace shared this adorable photo of Charlotte, who clearly loves the country life, at their home in Norfolk.

And pretty in pink for her third birthday …

When she was just 16 months old, the princess travelled to Canada with her parents and brother,  Prince George, 3, in September 2016, on a whirlwind eight-day tour to British Columbia and Yukon. During a tea party event staged for the children in Victoria, the young princess reportedly said her first word in public. She was overheard yelling “pop” as she chased a balloon in the garden of B.C.’s Garden House. (For more on our coverage of the Royal Canada Tour 2016, go here.)

Prince Louis Turns 4 With New Birthday Photos; Plus, a Look Back at Some of Our Favourite Shots of the Adorable Royal