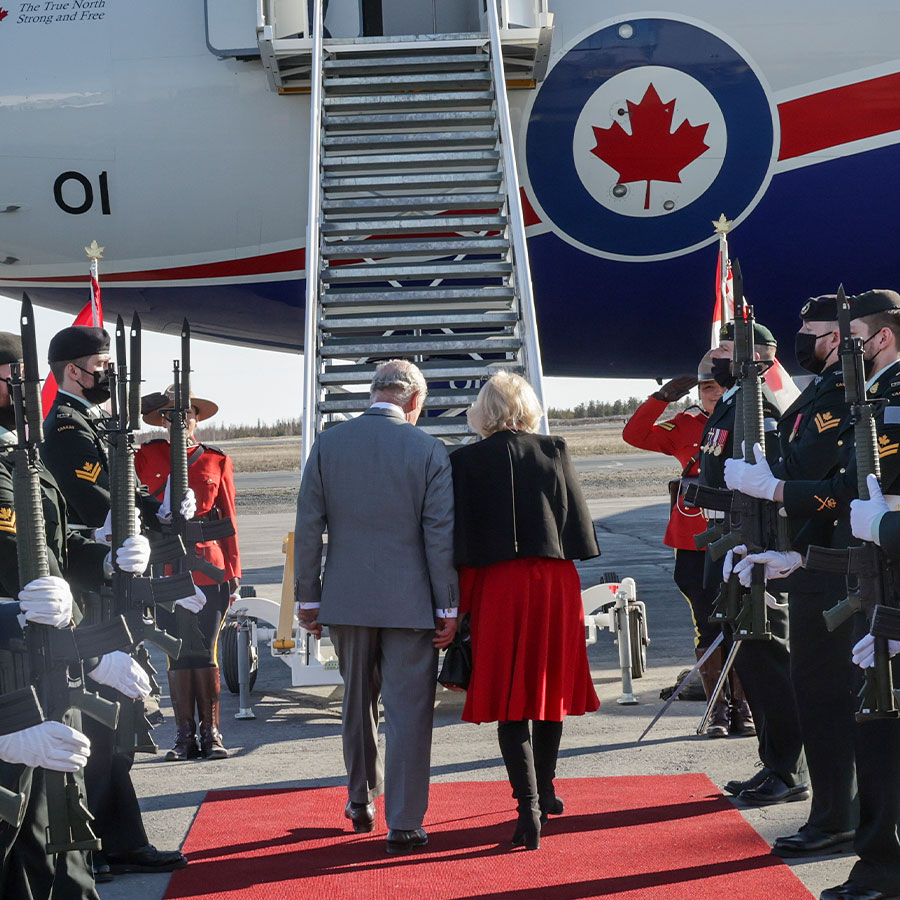 Prince Charles and Camilla, Duchess of Cornwall, are honoured with a Departure Guard before they depart for the U.K. on day three of their Platinum Jubilee Royal Tour of Canada in Yellowknife on May 19, 2022. Photo: Chris Jackson/Getty Images

On a royal tour, imagery is everything. As William and Kate learned the hard way earlier this spring, greeting crowds behind a barbed-wire fence, or looming above Commonwealth subjects in a retro Land Rover in white-gloved military regalia, make for some pretty cringeworthy — and anachronistic — photographs.

The stakes were high as the Prince of Wales and the Duchess of Cornwall embarked on their whirlwind, three-day tour of Canada this week ahead of the Queen’s Platinum Jubilee, with stops in Newfoundland and Labrador, Ottawa and the Northwest Territories, from which they flew home Thursday. This was the final Commonwealth tour by senior royals on behalf of the Queen to celebrate her Platinum Jubilee, a series of journeys marked by unrest in the realms.

Both the Cambridges (who toured Belize, Jamaica and the Bahamas) and the Earl and Countess of Wessex (who toured Antigua and Barbuda, St. Vincent and the Grenadines and St. Lucia) faced protests and calls for reparations for Britain and the monarchy’s role in the slave trade. Only Princess Anne, who toured Papua New Guinea with husband, Admiral Tim Laurence, received a warm welcome.

The imagery from Canada this week was carefully curated to show the prince actively listening. This was Charles’ 19th visit to Canada in the past 50 years. It should be noted that the tour was at the request of Canada, and the provinces visited were chosen for their anticipated warm welcome.

This has been part of Canada’s curated approach to royal tours dating back to when the Queen last visited Quebec in 1964; she was greeted by protestors with their backs turned, chanting: “Elizabeth go home.”

Polls released by Angus Reid ahead of the visit showed that 51 per cent of Canadians would prefer not to continue as a constitutional monarchy, though nearly two-thirds of respondents support Queen Elizabeth herself. Her son enjoys less favourable ratings, with 67 per cent of Canadians “moderately or strongly” opposing Charles becoming King of Canada when he accedes to the throne. The odds of Canada actually changing its constitution to break from the monarchy — as Barbados did last November, in a ceremony attended by both Prince Charles and Rihanna, at which time the latter was bestowed the title of National Hero of Barbados — are low, as all the provinces and territories would need to agree to remove the monarch as head of state.

The palace, meanwhile, showed how much they had learned — and how quickly — from the Cambridge and Wessex tours. Immediately upon landing in St. John’s, where Prime Minister Justin Trudeau greeted Charles and Camilla, the prince set the tone for the visit.

He acknowledged that their visit comes in the middle of a difficult time of reckoning with Canada’s grievous track record of treatment of its Indigenous peoples, and the discovery of an ever-increasing number of unmarked graves at former residential schools across the country.

“We must find new ways to come to terms with the darker and more difficult aspects of the past, acknowledging, reconciling and striving to do better,” Charles said. “It is a process that starts with listening. My wife and I look forward to listening to you, and learning.”

There followed a moment of silence and reflection at Heart Garden, planted to honour the memories of the children who died at residential schools. Many of those schools were run by the Anglican Church, of which the Queen is head, and someday Charles will be as well.

The Archbishop of Canterbury issued an apology for what he called the church’s role in “building hell” on a visit to Saskatchewan earlier this month. The Pope, who met with an Indigenous delegation in Rome for talks earlier this year, is expected to make an apology on his own visit to Canada later this summer, as the Catholic church also ran many residential schools. Calls for apologies from Charles and his mother, the Queen, came throughout the tour from Indigenous leaders though, ultimately, the royals stopped short of offering one.

“On behalf of my wife and myself, I want to acknowledge their suffering and to say how much our hearts go out to them and their families,” Charles said following a meeting with residential school survivors. “We must listen to the truth of the lived experience of Indigenous peoples and we should work to understand better their pain and suffering.”

The itinerary reflected the listening and learning Charles stated was their intent. Visits to learn about Indigenous language preservation, a prayer ceremony in Inuktitut, cultural ceremonies and Mi’kmaq music were all part of the agenda. On their final day the prince and duchess visited the Northwest Territories and, either together or separately, met with representatives of Yellowknive’s Dene First Nation, participated in a traditional Drum Dance and Feeding the Fire Ceremony, attended art and language lesson classes at a local school and met with residents in the remote community of Dettah. Charles also acknowledged the devastating effects that climate change has taken on northern  Indigenous communities and “the supremely urgent need to take decisive, bold action.”

The couple had also clearly learned more cultural sensitivity following their major gaffe on their visit in 2017, when Charles and Camilla were filmed giggling at a concert featuring traditional Inuit throat singing.

The crowds for the prince were much smaller than they were at the height of the Diana-mania visits in the ‘80s and ’90s, but there was a good showing at the War Memorial in Ottawa and for the couple’s spin through the vendors at Byward Market. Baby steps achieved during what was, perhaps, in some small way, a dry run for when Charles and Camilla one day return to Canada as King and Queen Consort of England.

Royal tours in general, though, will likely need further refinement, but this Canadian tour is a step toward a more modern relationship with Commonwealth countries. By immediately addressing the biggest issue in this country — the mourning of the Indigenous children who died at residential schools, and the ongoing discovery and recovery of bodies — the prince set the right tone. Hopefully that signals that an apology from the Crown for the Church of England’s role in the travesty will be forthcoming in the near future.

Surely the prince and the duchess will be breathing a sigh of relief to have completed their tour with no major negative headlines flaring up, satisfied they have included Canada in the Queen’s celebratory year. As Charles told Prime Minister Trudeau: “It is always a joy to come to Canada.”

On Final Day of Royal Tour, Prince Charles Calls For Understanding of “Pain and Suffering” of Canada’s Indigenous People