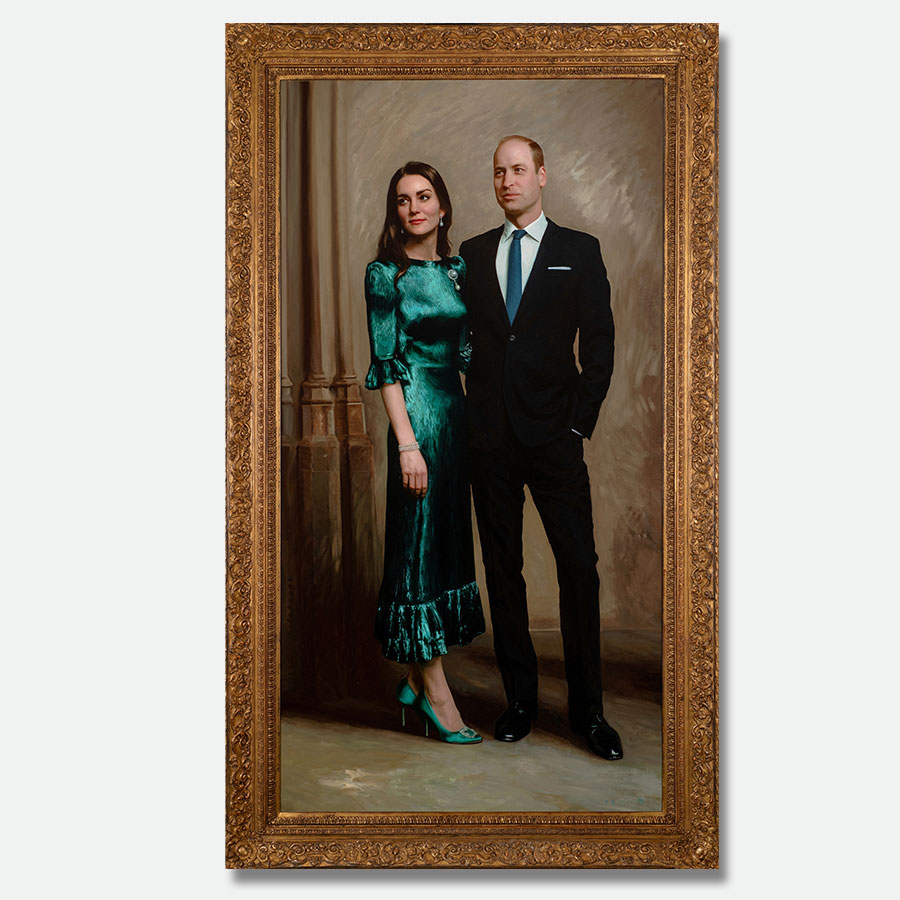 Prince William is starting off his 41st year with quite the chic makeover. A new portrait of the Duke and Duchess of Cambridge was unveiled today at the University of Cambridge’s Fitzwilliam Museum, commissioned by the Cambridgeshire Royal Portrait Fund as a gift to the couple, in honour of William’s 40th.

But it is the newly sleek fashion on not just Kate, who has been sharpening up her closet recently, but on William. His super-slim-fitting dark suit is giving serious Hedi Slimane vibes. The designer has not been identified as yet, which is typical of royal male getups, but Slimane, who revolutionized men’s fashion with a skinny rocker silhouette for men’s suiting, first at Dior Homme, then YSL and now Celine, seems to be the inspiration. And William’s pose! Left knee cocked out, hands in pockets, he looks like a model in one of Slimane’s shows!

A great Kate fashion moment has also been committed to canvas for posterity: the emerald green Falconetti dress by Susie Cave for her Vampire’s Wife label was first seen back in 2020, when Kate wore it to the Guinness Factory in Dublin on the couple’s Ireland tour. She subsequently busted a similarly sparkling pink gown by the label at a reception in the middle of the jungle in Belize on the Cambridge’s Commonwealth Jubilee Tour this past spring. For the portrait, she paired green Manolo Blahnik heels with diamonte buckle (the Hangisi model, a.k.a. Carrie Bradshaw’s wedding shoe in SATC) with her green frock for the pose. She finished the look with pearl earrings and a Garrard pearl brooch.

The formal portrait, by hot, young British artist Jamie Coreth (who won the Young Artist Award in 2016, and has also painted the Princess Royal, will be loaned to the National Portrait Gallery for its 2023 reopening. Here is what the artist had to say about his subjects in a news release: “It has been the most extraordinary privilege of my life to be chosen to paint this picture. I wanted to show Their Royal Highnesses in a manner where they are relaxed and approachable, as well as elegant and dignified,” he said. “I wanted to evoke the feeling of balance between their public and private lives.” He also took pains to include some of actual Cambridge in the work, adding what the British society magazine Tatler called “the tones and colours of many of the historical stone buildings that are synonymous with the city” into the background.

This portrait comes just days after a Father’s Day shot of the prince and his three children, which is more in keeping with the way we have seen him portrayed up until now: natural light, big smiles, nondescript, non-designer chino and polo looks.

But after the whole Cambridge family took such a prominent role at the Queen’s Platinum Jubilee celebrations, this feels quite deliberate, like a declaration of modernity (and a new forward edge to their fashion) for both the duke and duchess. Yes, they are taking a page from the Sussexes, who definitely had sizzle in their working royal years. By contrast, William and Kate had been playing the dependable young parents’ role. But Kate has been stepping it up, big time: the moment she showed up to the première of the last Bond film in London in a jaw-dropping starburst golden Jenny Packham gown was the first sign we’ve seen of Kate pushing the glamour buttons.

She kept her Jubilee wardrobe pitch perfect for the occasion: carefully chosen re-wears, flag — red, white and blue, the colours of the Union Jack — dressing, her more familiar Mumsy coat dress style (albeit sleek and flawlessly pulled off). Her role there was to support the Queen, the star of the show, even when she wasn’t able to be onstage.

But this portrait reveal feels like a bursting forth of youthful energy for both the Cambridges. The timing is notable, as William’s dad is in the middle of a big event — the Commonwealth meeting in Rwanda, where he and Camilla paid tribute to victims of the Tutsi genocide of 1994, and met with survivors ahead of meetings with Boris Johnson and other Commonwealth leaders. It is a big diplomatic moment for the Prince of Wales. Normally, the Palace would not have had a headline grabbing event like a sexy William and Kate portrait reveal conflict with his father’s turn in the spotlight in a statesmanlike milieu. But it is clearly a sign of how aligned the two houses — Cambridge and Wales — are at the moment, and indicates the Palace vision moving forward is to focus on how the father and son work together, and complement each other, in royal roles and duties.

In any case, for dedicated followers of fashion, the royal bar for the second in line to the throne just got raised and we are here for it!

On the Platinum Jubilee Weekend, a Book of the Queen’s Portraits Reveals the Symbolic and Human Face of the Royal Family