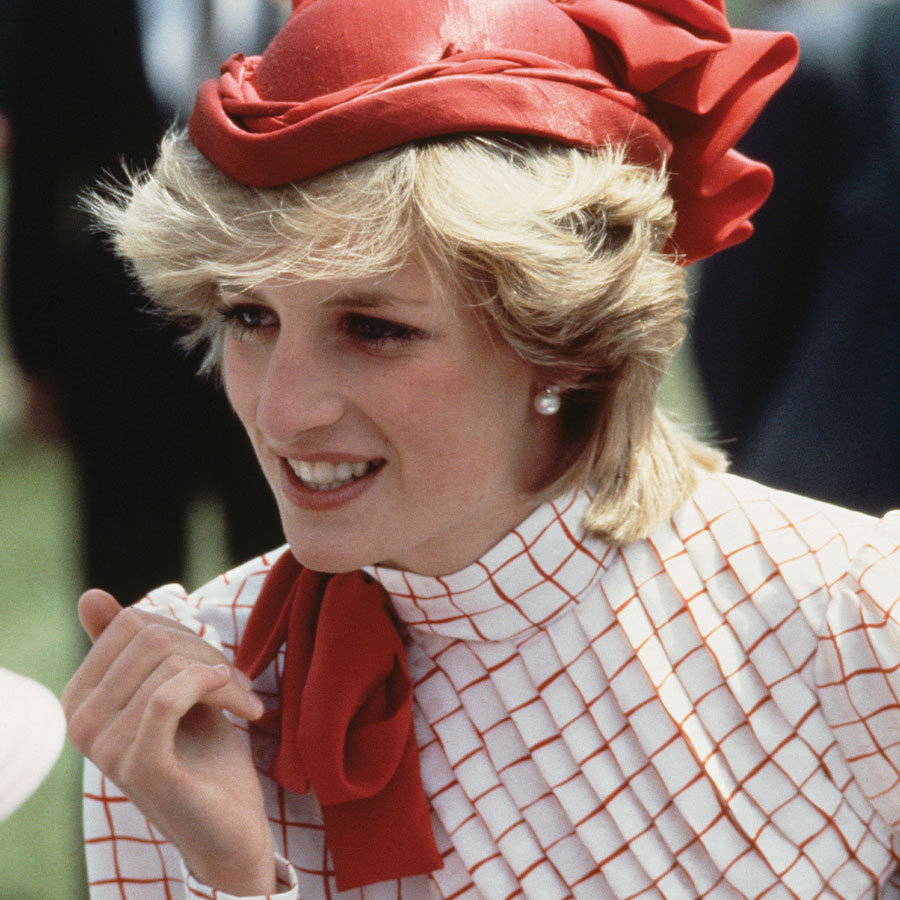 Diana, Princess of Wales often sported red and white in her outfits as an ode to the Canadian flag during her royal tours of Canada, including this iconic look from her visit to Nova Scotia in June of 1983. Photo: Tim Graham Photo Library/Getty Images

Today marks the 25th anniversary of the death of Diana, Princess of Wales.  In honour of the occasion, we revisit our 2021 story on her royal tours of Canada, during which Diana began to find her way in both diplomatic dressing and as a fashion influencer.

On the heels of Diana’s triumphant first royal tour Down Under in 1983, the Prince and Princess of Wales arrived in Canada in June of that year. The Australia visit, portrayed so vividly in The Crown, showed what Di-mania was like: The crowds were so adoring there, she reversed the tide of republicanism with her glamour and warmth. Canada was another victory lap for the People’s Princess, as we fell under her spell. This is the moment Diana began to find her way in both diplomatic dressing and as a fashion influencer.

The young mother, separated from Prince William — who turned one on June 21 midway through the 18-day tour — was still dressing in a demure manner: Think soft yellows and blues, with a punch of red and white as an ode to the Maple Leaf flag. There were pie-crust collars and longer hemlines, frills and boxy jackets.

But it was the pink-and-peach silk dress she wore to an invitation-only Klondike-themed barbecue in Edmonton that made the front pages. Crafted by Oscar-winning British costume designer John Bright in an 1880s style, complete with interior bodice boning, a swagged silk overskirt, lace underskirt and a back train, it was originally worn in a 1978 Masterpiece Theatre mini-series called Lillie (pictured above, in middle, with Prince Charles).

Diana wasn’t quite a fashion icon yet. Many labels she wore on that tour are lost to the sands of time, since there was less detailed reporting on royal fashion then. But the sartorial highlight was the gown by English designer Gina Fratini that she wore to a state dinner in Halifax, hosted by then-prime minister Pierre Trudeau.

Much more fairy-princess-like than the sleek numbers she wore later in life, it was reminiscent of her wedding dress, full and poufy, with full coverage and decorative bows. It was worn with what would become her signature tiara, the Cambridge Lover’s Knot (now the go-to tiara of Catherine, Duchess of Cambridge).

Diana also wore the Royal Family Order, which the Queen gives to senior female royals, on special occasions. The portrait of young Elizabeth II, painted on glass and surrounded by diamonds, is attached to a chartreuse yellow ribbon and pinned to the wearer’s left side. The gift is never public; we discovered Kate had one when she wore it to a state banquet in 2018.

Another notable fashion moment on that tour was the sheer floral printed skirt with matching belted blouse by English designer Jasper Conran that she wore in Ottawa. It marked the start of Diana’s penchant for communicating through clothing and, in this instance, it was a playful nod to the famous shot taken in early days of her courtship with Charles, when she was unwittingly photographed with a child in her arms and the sun behind her, outlining her long legs through the thin fabric of her skirt.

Diana’s sartorial confidence was evident on the couple’s second tour to Canada, after the birth of Prince Harry. Reporters at the time noted how hemlines “rose consistently” through the visit, while necklines plunged at evening events. There were peplums (a black-and-white Bruce Oldfield skirt suit) and polka dots (a Jan Van Velden blue-and-black suit) and pussy bows: This was the height of Dynasty fashion. It was a tough tour with a gruelling schedule, as the couple opened Expo ’86 and traipsed through several of the 80 pavilions at the World’s Fair in Vancouver, and visited five B.C. cities in eight days.

By this time she had started tapping British designer Catherine Walker (still a favourite of Kate), who made Diana a lovely rust-coloured dress with pussy bow and matching wide-brimmed Frederick Fox hat for an event in Kelowna. At the Expo in Vancouver, she was stunning in a Victor Edelstein cream dress, completed with strands of pearls.

A black trouser suit by Jasper Conran made a real fashion splash when she wore it with a ruffled blouse that would still look modern today, paired with a memorable Butler & Wilson snake brooch. But the fashion moment is more famous in Canada because she was photographed while meeting rocker Bryan Adams and his band.

For the state dinner, hosted by Brian and Mila Mulroney in Vancouver, Diana wore a white lace, long-sleeved gown by British designer Murray Arbeid and paired it with the Queen Mary tiara. The other big-jewel moment on this tour was the World Festival of Arts Opera Performance at the Orpheum Theatre, where she paired a ruched, blue gown with tiny red polka dots by Bruce Oldfield with a stunning (and massive) sapphire choker (pictured above, middle).

The 1991 tour was when Charles and Diana famously brought William, 9, and Harry, 7, along for stops in Toronto, Sudbury, Kingston and Ottawa. The boys were treated to “secret” tours of the Royal Ontario Museum (because, dinosaurs) and the CN Tower. Charles and Diana did many individual events on this tour (a year before their separation) that reflected their personal interests. Diana toured Casey House, Canada’s first stand-alone hospital for HIV/AIDS patients, in Toronto and a battered women’s shelter in Sudbury; Charles focused on his own causes: education, the environment and architecture.

But, as was increasingly the case, Diana’s charisma – and her fashion – stole the limelight. Particularly memorable was a killer, oversized, red-and-white, graphic houndstooth suit by Moschino that Diana wore in Toronto, paired with a broad-brimmed red hat with a wide black hatband by Philip Somerville. We all know that suit, because she was wearing it when her boys ran up the gangplank of the Royal Yacht Britannia in Toronto harbour and she crouched down to swoop them up in her arms.

To visit the National Arts Centre in Ottawa, Diana re-wore one of her favourite pieces of jewelry, which she famously wore to the White House in 1985 when she danced with John Travolta. Originally, a diamond-ringed sapphire brooch that was a gift from the Queen Mother, Diana had it mounted on seven strands of pearls and turned it into a choker. For a gala dinner at Toronto’s Royal York Hotel, she wore a Catherine Walker ball gown – a low-cut, off-the-shoulder, black top with a sleek green skirt – topped by the Spencer tiara.

On the casual side, it was blue plastic slickers that became the money shot for newspapers across the country. On a day off, Diana took the boys to see Niagara Falls, where they climbed aboard the Maid of the Mist and donned rain gear to protect them from the colossal spray at the base of the falls. It is such a Canadian rite of passage, but more importantly, this beloved archival shot shows Diana and her boys having fun, grinning from ear to ear.

A version of this article was first published in the July/August 2021 issue with the headline “Dressed to Impress,” p. 48.