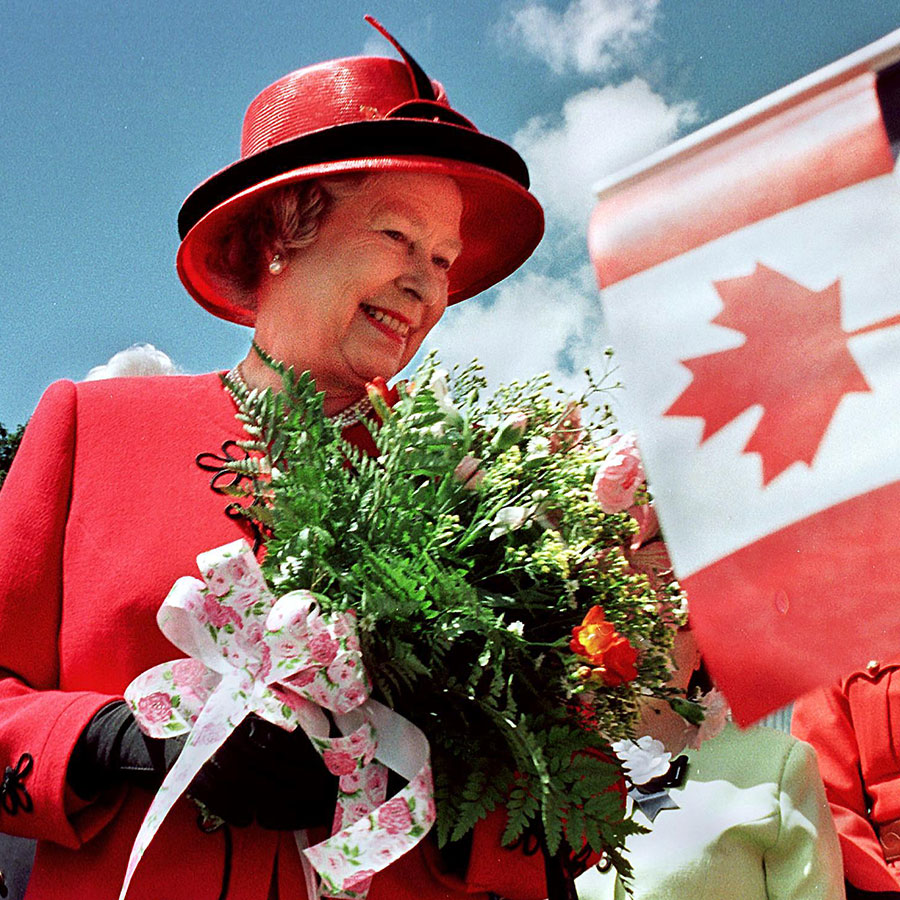 HM Queen Elizabeth II ascended to the throne upon the death of her father, George VI, on February 6, 1952 (though her coronation was held the following year). The day before, Princess Elizabeth was 165 km outside of Nairobi, Kenya, filming elephants. That night, she and her husband, naval commander Prince Philip, went to bed in a treehouse — at the famed Treetops Hotel — literally in the middle of nowhere with jungle sounds lulling them to sleep.

While she was dreaming, at just 25 years old, and a mother of two, Elizabeth became Queen when King George VI died in his sleep at Sandringham — the Norfolk home she returns to every year on Accession Day.

That waking moment was captured in a message written in the hotel’s guest book by a fellow resident: “For the first time in the history of the world, a young girl climbed into a tree one day as a Princess and, after having what she described as her most thrilling experience, she climbed down from the tree next day a Queen — God bless her.”

Because of the remote location, and the state of telecommunications, it took some time for Elizabeth to be notified of the fact she was already Queen. She began the sombre journey back to her father’s funeral, and to the new life of service she was destined to undertake. She vowed to see as many of her people as possible for her coronation year, and clocked 56,000 travel miles through the Commonwealth, including to Canada.

There is no royal couple in history with a longer relationship with Canada than Queen Elizabeth II and Prince Philip, Duke of Edinburgh, who died at the age of 99 on April 9. The duke was the first to set foot on Canadian soil in 1941 when, as a midshipman with the Royal Navy, he had shore leave in Halifax. In between royal visits, stopovers and solo trips related to patronages, military regiments and his work with charities like the World Wildlife Fund and the Duke of Edinburgh’s Awards, he made more than 70 appearances in this country.

Lieutenant Philip Mountbatten married HRH Princess Elizabeth in 1947, and Canadians shared in the celebrations as the BBC broadcast the Westminster Abbey wedding ceremony to 200 million listeners around the world.

With her father’s health in decline, the couple were thrust into the spotlight in 1951, when King George VI and Queen Elizabeth (later the Queen Mother) cancelled their trip to Canada and sent the heiress presumptive and her husband in their stead. The visit was delayed after the King went from Balmoral Castle to London for treatment for lung cancer, with all events on a 33-day schedule pushed back a week when he had surgery.

They received widespread praise for modernizing the Royal Family’s public image, travelling across the Atlantic for the first time by plane rather than by ship, where they were greeted by 15,000 admirers at the Dorval airport in Montreal. Princess Elizabeth was just 25, with an ailing father, two-year-old Prince Charles and one-year-old Princess Anne at home. Legendary Canadian journalist Pierre Berton reported that, on the tarmac, the black bag on the princess’s left arm was trembling and she repeatedly moistened her dry lips.

“Only by an iron self-control did she conceal how nervous she really was,” Berton wrote in a Maclean’s magazine series marking her official coronation in 1953. “Thus, under the worst of conditions, did Canadians catch their first glimpse of Elizabeth of England.”

Princess Elizabeth dropped the puck at a National Hockey League game at Maple Leaf Gardens and Prince Philip wore blue jeans to a square dance at Rideau Hall and a white cowboy hat to the Calgary Stampede. By the end of the trip, which had covered 16,000 kilometres, Berton said they heard the national anthem played 150 times and Princess Elizabeth had shaken approximately 30,000 hands a week.

“Five weeks later, under rather different circumstances, they bade her good-bye, a laughing relaxed figure with a scarf tossed over her hair, smiling into the teeth of a Newfoundland gale,” he wrote.

From their first trip as Queen and consort in 1957 to their last nine-day visit in 2010, the couple made more than 20 official visits to this country, which the monarch called her “second home.”

“I have watched with enormous admiration how Canada has grown and matured while remaining true to its history, its distinctive character and its values,” she said in a 2010 Canada Day speech on Parliament Hill. “This nation has dedicated itself to being a caring home for its own, a sanctuary for others and an example to the world.”

The Queen has witnessed some of the most significant moments in Canadian history, opening the St. Lawrence Seaway in 1959, attending the country’s 100th birthday extravaganza and Expo ’67, and signing the Patriation of the Constitution in 1982.

When Queen Elizabeth II succeeded to the throne in 1952, Chief Justice Thibaudeau Rinfret proclaimed: “The High and Mighty Princess Elizabeth Alexandra Mary” Queen and “Supreme Liege Lady in and over Canada.” The following year, she became the first monarch to be crowned Queen of Canada along with her other Commonwealth realms. The coronation ceremony was the first trans-Atlantic broadcast after BBC film footage was flown to Canada to be shown on the CBC. In her first televised Christmas message in 1957, the Queen spoke about becoming the first monarch to open parliament in Ottawa that same year and recalled how she was “overwhelmed by the loyalty and enthusiasm of the Canadian people.”

The six-and-a-half-week 1959 royal tour, where the Queen opened the St. Lawrence Seaway with American President Dwight Eisenhower, was the last multi-week, cross-country train journey that followed tour precedents set by the Queen’s grandparents, the future King George V and Queen Mary, in 1901, and the Queen’s parents, King George VI and Queen Elizabeth, in 1939. During the tour, the Queen discovered that she was expecting Prince Andrew, her third child; although it was not public news, Prime Minister John Diefenbaker was one of the first to know. Since she needed to rest, Prince Philip stepped up with more solo engagements, advocating for physical education programs in his new role as the first lay president of the Canadian medical association, for example. While the royal couple were generally well received, CBC journalist Joyce Davidson caused an uproar when she was interviewed about the royal tour on the Today show in New York and said Canadians “were still annoyed at still being dependent on a monarchy” and most Canadians viewed the Queen with “indifference” because they were not of British descent.

The Queen met more controversy in 1964 when she faced protestors during a visit to Quebec City, where she gave a speech in French to the provincial legislature. The public perception of the monarchy in the province had been that it served as a unifying force at the beginning of the Queen’s reign, but now, during the Quiet Revolution, the Royal Family was seen as a symbol of British oppression. As debate about the future of the monarchy in Canada intensified, both the Queen and Prince Philip made the case for the importance of the Canadian constitutional monarchy through their speeches.

“I think it’s a complete misconception to imagine that the monarchy exists in the interests of the monarch — it doesn’t,” Prince Philip said at a 1969 Ottawa press conference. “It exists in the interests of the people.” His thoughtful remark was overshadowed by one of his more famous gaffes when he added, “We don’t come here for our health, we can think of other ways of spending our time.”

And in a 1973 speech praising Canadian multiculturalism, the monarch said, “It is as Queen of Canada that I am here, Queen of Canada and of all Canadians, not just of one or two ancestral strains,” countering the perception of her as a purely British monarch.

During their time in Canada, the Queen and Prince Philip became closely involved with Canadian institutions, charities and military regiments. Over 500,000 Canadian young people have participated in the Duke of Edinburgh’s Award program, for example. The Queen’s grandfather, King George V, first granted royal patronage to the Royal Agricultural Winter Fair in Toronto, Prince Philip opened it in 1967 and to this day, the Queen is the fair’s royal patron. As horse lovers, the Royal Family’s association with the Queen’s Plate, Canada’s oldest thoroughbred race, goes back to Queen Victoria, its first royal patron. Her daughter, Princess Louise, was the first to attend in 1881, while the Queen, its current royal patron, watched the race on her last visit to Canada in 2010.

In the 1980s and 1990s, the Queen and Prince Philip’s tours coincided with historically and politically significant events such as the 1982 Patriation of the Constitution, the 200th anniversary of the province of Ontario in 1984 and the 125th anniversary of Canadian confederation in 1992. However, it was the younger generation that dominated the headlines, with Canadian tours by Charles and Diana, Prince and Princess of Wales in 1983, 1986 and 1991 attracting traffic-stopping crowds and massive press attention. The breakdowns of the marriages of three of the Queen and Prince Philip’s four children in the early 1990s and the Royal Family’s initially understated response to death of Diana, Princess of Wales once again prompted debate about the future of the monarchy in Canada, but by the 21st century, the Queen was being celebrated as an elder stateswoman during her Golden Jubilee tour in 2002.

The most recent Canadian tours by the Queen and Prince Philip were an opportunity to celebrate decades of public service. At an official dinner in their honour at the Fairmont Royal York Hotel in Toronto during the 2010 royal tour, then Prime Minister Stephen Harper gave a speech paying tribute to the Queen with hockey metaphors, declaring the monarch Canada’s “Most Valuable Player.” In 2013, Prince Philip visited Toronto to present new colours to the 3rd Battalion, The Royal Canadian Regiment, at Queen’s Park, and was made a Companion of the Order of Canada and a Commander of the Order of Military Merit.

In 2010, the Queen and Prince Philip celebrated Canada Day on Parliament Hill in Ottawa in front of a crowd of 70,000 people, prompting a revival of public interest in the monarchy that continued throughout the second decade of the 21st century as the Queen’s children and grandchildren undertook their own royal tours and patronages. Charles and Camilla, the Prince of Wales and Duchess of Cornwall visited Canada in 2014 and attended the 150th anniversary of confederation in 2017. The Prince’s Trust Canada addresses issues of youth unemployment, entrepreneurship training and support for veterans and environmental sustainability through partnerships with Canadian charities, companies and organizations.

When Prince William married Catherine Middleton in 2011, their first overseas tour as Duke and Duchess of Cambridge was to Canada, where they celebrated Canada Day on Parliament Hill, as the Queen and Prince Philip had done the year before. Like his grandfather in 1951, Prince William wore a white cowboy hat on a visit to the Calgary Stampede. The Duke and Duchess of Cambridge returned to Canada in 2016 with their children Prince George and Princess Charlotte, introducing a new generation of royalty to Canadians.

Dr. Carolyn Harris is a historian, author and royal commentator based in Toronto. She is an instructor in history at the University of Toronto, School of Continuing Studies and has written several books on the British monarchy.