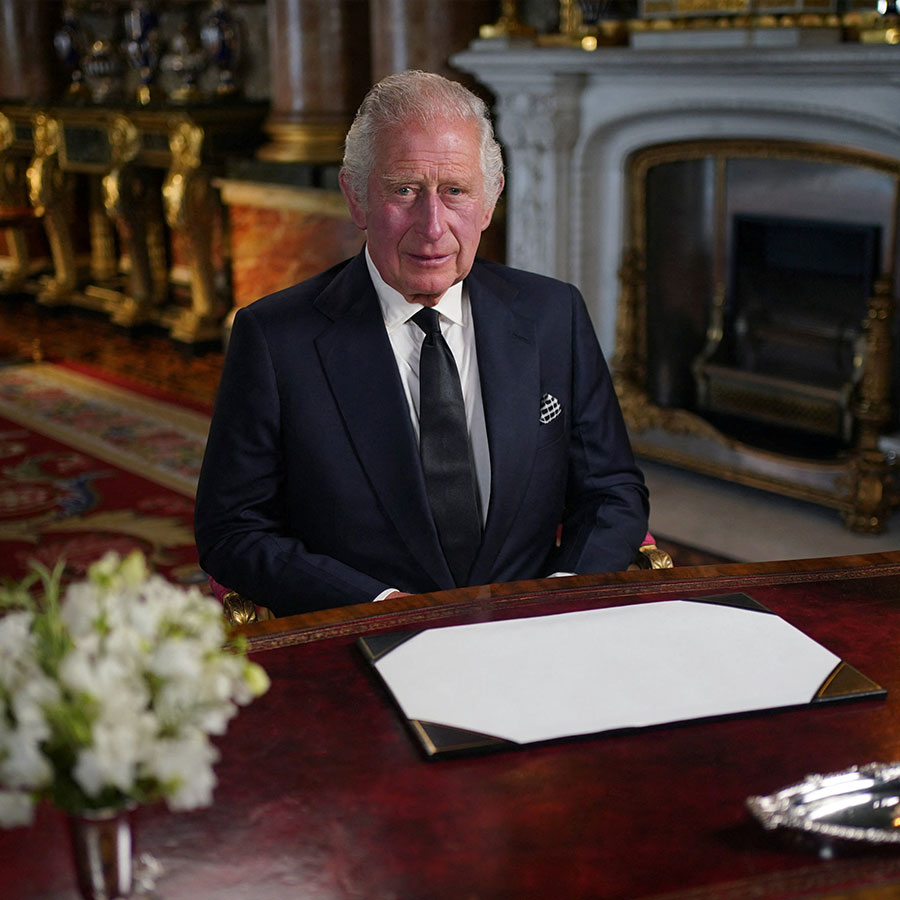 Britain’s King Charles pledged on Friday to follow the example of his mother Queen Elizabeth in devoting himself to duty, during a solemn address to the nation in which he also spoke of his love for her, and for his wife and children.

Charles became King on Thursday after Elizabeth died aged 96 at her Scottish residence. On Friday he flew down from Scotland to London and delivered his first speech as sovereign, filmed at Buckingham Palace.

“Queen Elizabeth was a life well lived; a promise with destiny kept and she is mourned most deeply in her passing,” the King said in the opening moments of his address, which he delivered with a photograph of her displayed next to him.

“That promise of lifelong service I renew to you all today.”

Charles called the late queen an inspiration and example to him, praising her profound personal commitment to serving the people of the United Kingdom and her other realms.

“In her life of service we saw that abiding love of tradition, together with that fearless embrace of progress, which make us great as nations,” he said.

“As every member of my family can testify, she combined those qualities with warmth, humour and an unerring ability to always see the best in people.”

Charles spoke of his profound sorrow at losing his mother, saying that he felt it “beyond measure”.

The new monarch also praised his “darling wife” Camilla, saying that she would bring to the demands of her new role as Queen Consort the steadfast devotion to duty on which he had come to rely since they married 17 years ago.

Camilla is Charles’s second wife after Diana, a hugely popular figure from whom he separated in 1992 and who died in a car crash five years later.

Camilla, who was blamed by Diana for the breakup of the marriage, was deeply unpopular for years, but has gained acceptance if not love from the British public during the years of her marriage to Charles.

Turning to his children, Charles bestowed on his eldest son and heir William and his daughter-in-law Kate the titles of Prince and Princess of Wales, which he and Diana previously held.

Charles also spoke lovingly of his younger son Harry and daughter-in-law Meghan, a significant gesture towards a couple whose relationships with the rest of the royal family have been strained.

“I want to also express my love for Harry and Meghan as they continue to build their lives overseas,” he said.

Harry and Meghan, an American former TV actress, stepped away from royal duties and moved to California in 2020. They have spoken about Meghan’s unhappiness and isolation during her time as a working royal.

Britain’s King Charles shook hands with dozens of members of the public outside Buckingham Palace on Friday, as emotional well-wishers snapped pictures and greeted the new monarch following the death of his mother Queen Elizabeth on Thursday.

Charles and his wife Camilla, Queen Consort, stepped out of the royal car just outside the gates of Buckingham Palace in an unanticipated gesture as they arrived back in London from Balmoral Castle in Scotland, where the queen died.

The couple, dressed in black, were received by huge cheers and applause from a crowd of hundreds gathered outside the palace, television footage showed.

The King proceeded to shake hands with dozens of well-wishers and look at floral tributes to his mother for more than ten minutes. Several members of the public sang “God save the King” and one shouted “Love you Charles!”

One woman kissed Charles’ hand, while another leaned over the security barrier to hug him and kiss his cheek. Several told him they were sorry for his loss, and he thanked them.

People gathered outside the palace pointed their phone cameras at Charles as he walked past, flanked by security personnel. One security officer asked people to put their phones down as the king approached and simply enjoy the moment.

Charles and Camilla then walked through the gates of the palace.