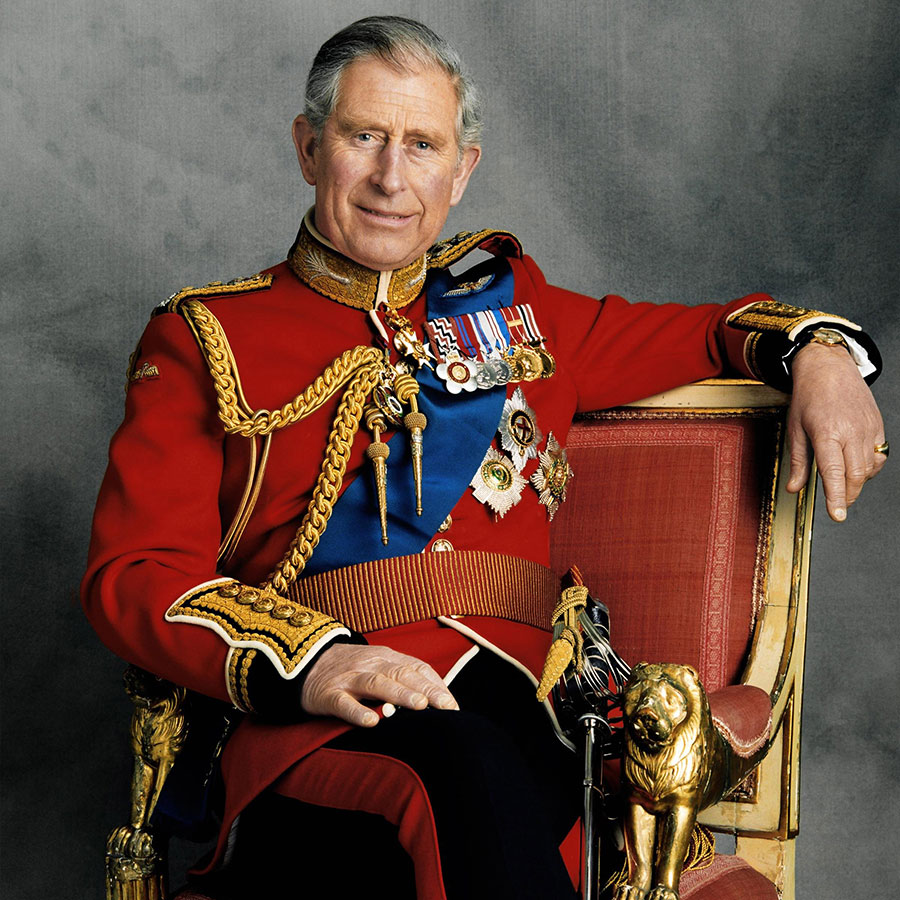 Years before becoming King Charles III, the Prince of Wales struck a regal tone for an official portrait to mark his 60th birthday in 2008. Photo: Hugo Burnand-Pool/Getty Images

Shouts of “Long Live the King” and choruses of “God Save the King” rang through the crowd around Buckingham Palace for the first time this morning as King Charles III greeted throngs along the rope line. Looking at turns solemn and smiling as he greeted those offering their condolences for the loss of his mother, the 73-year-old King demonstrated his intention to connect with subjects in his new role as the embodiment of the Crown. One of those subjects was overeager to connect back with him, leaning forward and giving him a kiss on the cheek.

King Charles arrived back in London from Balmoral with Queen Camilla, arriving via the Sovereign’s car flying the King’s new standard. Flags at Buckingham Palace were at half mast, as the country enters its official mourning period for Queen Elizabeth II.

This afternoon, King Charles will make his first address to the nation in a pre-recorded message. He is due to meet with the new Prime Minister, Liz Truss, carrying on the process of onboarding her begun by his mother just this past Tuesday at Balmoral. He will also meet with his Privy Council, another tradition in the formation of a new government that his mother’s illness left her unable to fulfill.

Picking up Constitutional duties in stride will help smooth the momentous transition between sovereigns. Charles has, of course, been in training for his destiny for the entirety of his life, and in the 70 years he has spent as the heir apparent.

Charles is set to be proclaimed King on Saturday, at St. James Palace, in front of the Accession Council. The formal coronation date has not yet been set, but is expected to be at least six months hence.

The question is what kind of King will Charles be? Carolus is the Latin version of Charles, hence most observers of these kind of arcane naming traditions assume will are entering the Carolinian era. The “new” Elizabethan age, as Liz Truss referred to it yesterday, has passed. By any measure, Elizabeth II will be a tough act to follow as she oversaw an arc of modern history and the tremendous progress and tumult that came with it. Charles is 73, so by simple math his reign cannot match his mother’s in length.

But it could be argued Charles has long been building his legacy. Once derided as a quack for his interests in organic and regenerative agricultural practices and environmental concerns, the climate crisis bearing down on us has brought his pet projects into the mainstream. Seen from this angle, Charles is a man ahead of his time.

He also has been a strong advocate for a “slimmed down” monarchy, taking minor royals off the balcony and out of the public purse. In this he has been aptly reading the room: the public’s relationship with the Royal Family has changed since 1952 when his mother took on the top job. In her time, she decommissioned the Royal Yacht Britannia and trimmed the Royal Train; she also began to pay taxes.

These efforts, along with her tremendous and widespread personal popularity, kept republicanism at bay, but Charles will face a different public, one looking to him to prove why they should continue to support him, literally and figuratively. The Commonwealth will be a thorny matter for him to deal with; he already presided over the end of Barbados as a Constitutional monarchy and he may yet have to graciously oversee the leave-taking of yet more Realms from the fold.

Charles has, at times, made his feelings about politics known. This is in contrast to his mother, who kept her own counsel about the affairs of the day, sharing her insights only with her Prime Ministers in private. It remains to be seen if Charles will follow her lead, and the tradition of keeping Crown and State separate. After all, there is now a long tradition of Charles’s so-called “black spider memos,” sent to various ministers, airing his views in private (though there have been calls that he was exerting undue influence).

In recent years, Charles has also taken on more and more of his mother’s duties. He has also taken on more of her traits. The two were oil and water when Charles was younger; he the emotional young man, an impractical romantic who spoke to his flowers and followed his run as a playboy bachelor with a mismatch marriage that deteriorated into tabloid bloodsport. The Queen was remarkable in avoiding scandal; Charles has attracted it like bees to honey. Even in the past few months, new details involving taking money from shady characters to fund his charitable ventures have raised eyebrows and launched inquiries.

There will be much for the King to do in the coming days and weeks. He is also likely to keep up the campaign he began this morning — shaking hands and connecting with the public — for the hearts and minds of Britons, the subjects of the Commonwealth, and the larger world. This period of mourning, as he prepares to bury his mother, will be critical for King Charles to get right. Exiting the car outside the Palace gates and turning towards the crowd was a good choice of first step.