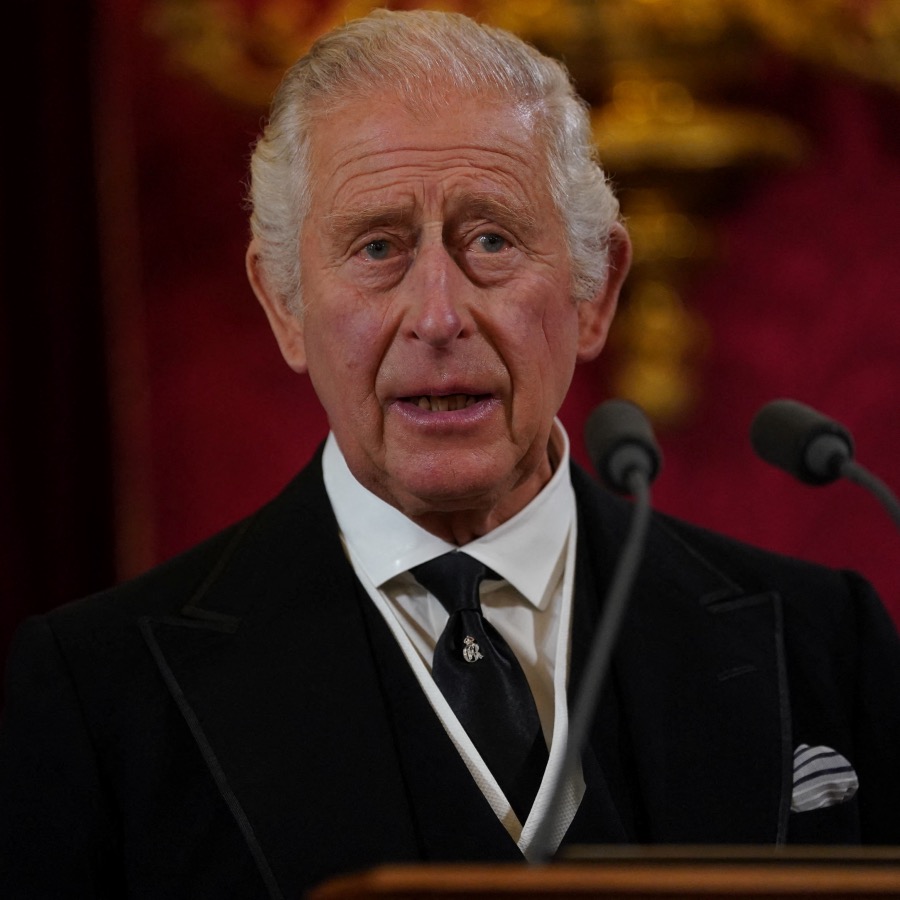 The state funeral for Queen Elizabeth will be held on Monday, Sept. 19, royal officials said on Saturday, as her son Charles was officially proclaimed Britain’s new King in a colourful ceremony laden with pageantry that dates back centuries.

The death of the 96-year-monarch has provoked tears, sadness and warm tributes, not just from the Queen’s own close family and many Britons, but also from around the world — reflecting her presence on the world stage for 70 years.

“We all thought she was invincible,” said her grandson Prince William, now the heir to the throne.

“It’s been surreal,” he added during a walkabout outside Windsor Castle where he and his wife Kate appeared closely in public for the first time in two years with his younger brother Harry and his wife Meghan — a sign Elizabeth’s death might help heal a rift between Charles’ sons.

Queen Elizabeth’s oak coffin, covered with the royal standard of Scotland and with a wreath of flowers on top, has been lying in the ballroom of Balmoral Castle, her summer home in Scotland where she died peacefully on Thursday.

On Sunday, it will be driven by hearse through remote highland villages to Scotland’s capital, Edinburgh, during a six-hour journey that will allow people to pay their respects.

The coffin will then be flown to London on Tuesday where it will remain at Buckingham Palace before being taken to Westminster Hall to lie in state until the funeral at Westminster Abbey at 10:00 GMT (6:00 a.m. EST) on Sept. 19.

The death of Queen Elizabeth, Britain’s longest-reigning monarch, has prompted an outpouring of emotion around the globe. Buildings and landmarks in Europe, America and Africa have been lit up in the red, white and blue of the United Kingdom’s flag.

Charles, 73, immediately succeeded his mother but an Accession Council met at St James’s — the most senior royal palace in the United Kingdom built for Henry VIII in the 1530s — to proclaim him as King on Saturday.

The council — formed of Privy Counsellors whose centuries-old role has been to advise the monarch — included his son and heir William, wife Camilla and Britain’s new prime minister, Liz Truss, who signed the proclamation of his accession.

Six former prime ministers, senior bishops and a swathe of politicians cried out “God Save The King” as the announcement was approved.

“I am deeply aware of this great inheritance and of the duties and heavy responsibilities of Sovereignty which have now passed to me,” Charles said. “I shall strive to follow the inspiring example I have been set.”

Later, on the Proclamation Gallery, a balcony above Friary Court of St James’s Palace, the Garter King of Arms, David White, accompanied by others in gold and red heraldic outfits, read out the Principal Proclamation as trumpets sounded.

Watching on were a few hundred people allowed into the court, including small children on parents’ shoulders, a woman clutching flowers and elderly people on mobility scooters.

King Charles is the 41st monarch in a line that traces its origins to the Norman King William the Conqueror who captured the English throne in 1066. Saturday’s events reflected proclamations announcing new kings and queens that date back hundreds of years.

He became King and head of state not only of the United Kingdom but of 14 other realms including Australia, Canada, Jamaica, New Zealand and Papua New Guinea.

It was the first proclamation of a monarch to be televised. And for most Britons, it was the first such event in their lifetime as Elizabeth was the only monarch they have ever known. Charles himself was just 3 when she became Queen in 1952.

Britain has declared a period of mourning until the state funeral for Elizabeth, which will be a public holiday. Leaders from around the world are expected to attend, including U.S. President Joe Biden, who said he would be there.

Charles’ coronation will take place at a later date — and the timing for that is not yet clear. There was a 16-month gap between Elizabeth becoming Queen and her coronation in 1953.

He has already made his eldest son William, 40, the new Prince of Wales, the title traditionally held by the heir to the throne, and William’s wife Kate becomes Princess of Wales, a role last held by the late Princess Diana.

The couple had a highly public falling out with Harry and Meghan, the Duke and Duchess of Sussex, after they decided to exit royal duties and move to California in 2020.

Harry and Meghan coincidentally happened to be in Britain this past week to attend some charity events and had not even been expected to see William — until the death of their grandmother.

However, the foursome stood together and chatted briefly, although they looked rather awkward and did not spend much time together during the 40-minute walkabout in Windsor, which followed an invitation from William to his brother.

It was an important show of unity at an incredibly difficult time for the family, a royal source said.

Meanwhile at Balmoral, the Queen’s three younger children — Anne, Andrew and Edward — and their own families also made a public appearance, visiting a nearby church before they inspected the messages among the flowers and thanked the crowd for their support.

Princess Eugenie, one of Prince Andrew’s daughters, was seen wiping away tears and hugging her father.

“It was a very emotional moment, it was very heartfelt,” said Ian Smith, a local businessman who was at the front of the barriers. “It was really special that they came to acknowledge us and we could show them our support.”

Queen Elizabeth, who was the world’s oldest and longest-serving head of state, came to the throne following the death of her father King George VI on Feb. 6, 1952, when she was just 25.

Over the decades she witnessed a seismic change in the social, political and economic structure of her nation. She won praise for modernizing the monarchy during her long reign, despite intense media scrutiny and the often highly public travails of her family.