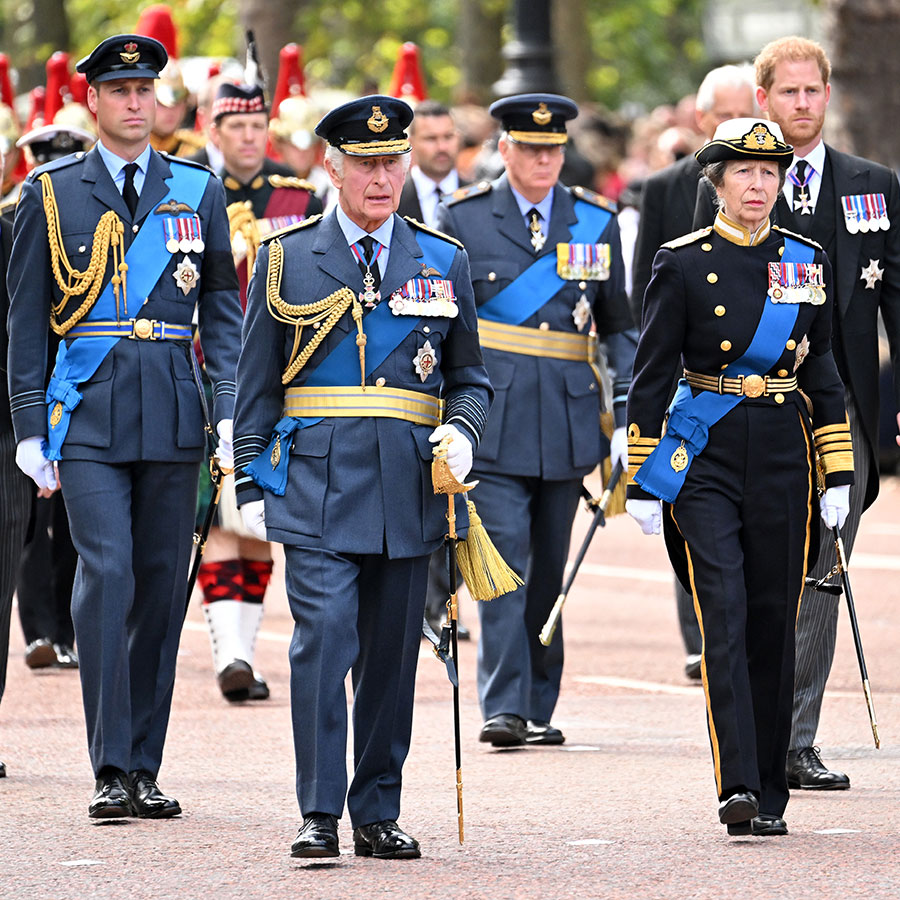 Huge crowds gathered in central London to witness the latest in a series of poignant ceremonies as the nation mourns the monarch who died last week aged 96 after seven decades on the throne.

Lying on a gun carriage, covered by the Royal Standard flag and with the Imperial State Crown placed on a cushion on top alongside a wreath of flowers, the coffin bearing Elizabeth’s body began a slow, sombre procession from her palace home to Westminster Hall, where it will lie in state for four days.

Walking directly behind were Charles and his siblings, Anne, Andrew and Edward.

In a group following them were Charles’s sons Princes William and Harry, a doleful scene reminiscent of when, as boys 25 years ago, they followed the casket of their mother Princess Diana when it was taken on a similar procession through central London.

It was also a symbolic show of unity as William, 40, now the Prince of Wales, and Harry, 37, the Duke of Sussex, are now said to be barely be on speaking terms after a bitter falling out in the last couple of years.

“We’re seeing something very sad but very special,” said Charlie Cooper, 51, who came down by coach from Liverpool, northern England, to watch. “It’s part of my history, and millions of others around the world.”

As the cortege moved slowly through central London, where numerous roads have been closed to traffic, guns began firing every minute at Hyde Park, while parliament’s famous Big Ben bell also rang at 60-second intervals.

When the procession reached Westminster Hall, a medieval building with origins dating back to 1097 and the oldest part of the Palace of Westminster that houses the British parliament, the coffin was carried inside by soldiers from the Grenadier Guards and placed on a catafalque.

There will be a short service conducted by the Archbishop of Canterbury, the spiritual head of the Anglican Church. Four days of lying in state will then begin until the funeral on Sept. 19.

“I feel very privileged and honoured actually to see the Queen’s final passing from her home,” said Caroline Clark, 56, who had travelled up from her home in southwest England to watch. “It means a lot to be able to pay my respects.”

People started waiting in line late on Tuesday, sleeping on the street in the rain, to be one of the first to file past the coffin, and already a queue about a mile long has sprung up.

“We didn’t even think about it,” said Glyn Norris, 63, adding a bit of rain would not deter her. “That was my Queen.”

Among those gathered, some were there to represent elderly parents, others to witness history and many to thank a woman who, having ascended the throne in 1952, was still holding official government meetings just two days before she died.

The government has warned the queue could stretch for up to 10 miles (16 kilometres) along the southern bank of the River Thames, winding past landmarks such as the giant London Eye ferris wheel and a reconstruction of Shakespeare’s Globe theatre.

Culture Secretary Michelle Donelan said some people might have to stand in line for as long as 30 hours in order to file past the coffin before Monday’s funeral.

“She’s an icon of icons,” mourner Chris Imafidon said. “I must at least endure this camping out of respect.”

Speaking to people in the queue, the Archbishop of York Stephen Cottrell quipped: “We are honouring two great British traditions, loving the Queen and loving a queue.”

Elizabeth’s coffin was flown back London late on Tuesday from Scotland, where it had been since her death at her Scottish summer holiday home Balmoral Castle, with tens of thousands of people lined the 14-mile (22 km) route in driving rain.

In Scotland, about 33,000 people filed past the coffin during the 24 hours it was at St. Giles’ Cathedral in Edinburgh, but the memorial in London is a much larger occasion.

As many as 750,000 mourners are expected to walk through Westminster Hall to pay their final respects.

A senior palace official described Wednesday’s poignant pageant as relatively small and personal. The full-scale ceremonial procession on the day of her funeral is likely to be one of the biggest the country has ever witnessed.

“She’s given 70 years of her life to us. I’m sure I can give 24 hours of mine,” said Mark Bonser, 59, who travelled from his home in Doncaster, northern England, to join the queue to see her coffin.