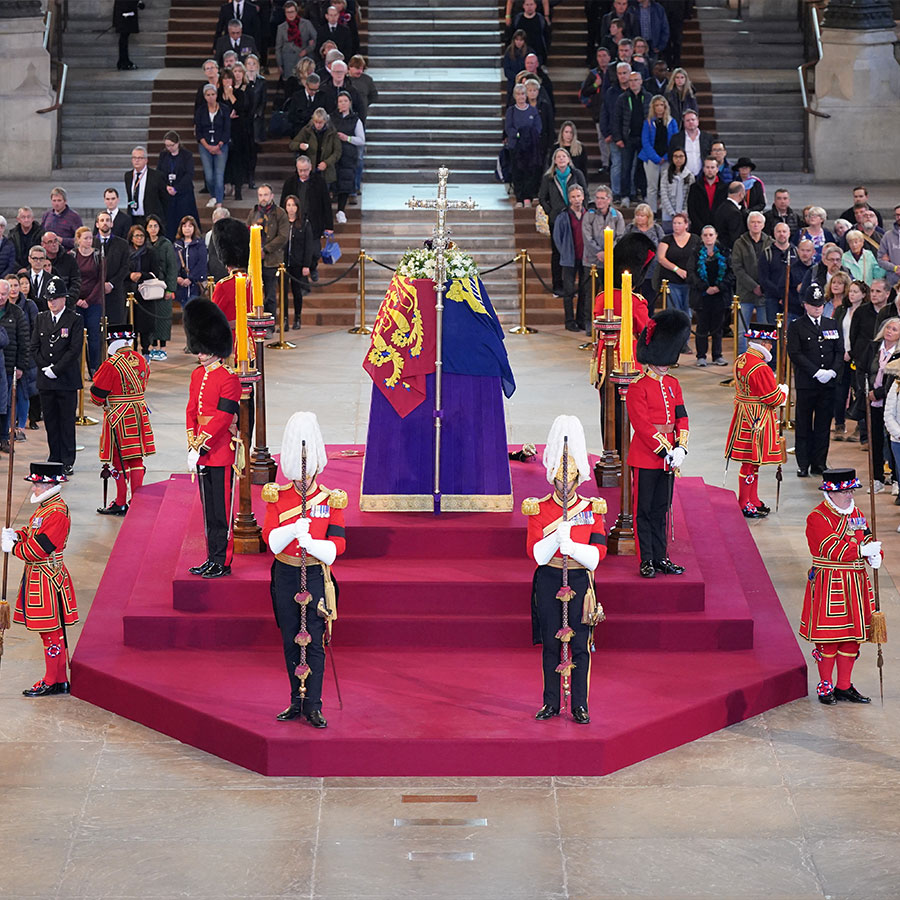 Members of the public file past the coffin of Queen Elizabeth II, draped in the Royal Standard with the Imperial State Crown and the Sovereign's orb and sceptre, lying in state on the catafalque in Westminster Hall, at the Palace of Westminster, ahead of her funeral on Monday. Photo: Yui Mok/Pool via Reuters

As tens of thousands of people poured into London ahead of Queen Elizabeth’s state funeral on Monday, the miles-long queue of mourners waiting to see her lying in state was temporarily closed on Friday after it swelled to capacity.

People of all ages and from all walks of life have paid their respects to the late Queen, joining a well-organized line that stretches along the south bank of the Thames and then over the river to parliament’s Westminster Hall.

But by mid-morning, the line was just too big — a testimony to the public’s respect and affection for the Queen, who died in Scotland on Sept. 8 at the age of 96 after a 70-year reign.

“Entry will be paused for at least 6 hours,” Britain’s culture department said. “Please do not attempt to join the queue until it re-opens.”

It warned of waiting times of up to 12 hours. Some 750,000 people in total are expected to file past the Queen’s coffin.

On Friday night, King Charles, who was visiting Wales on Friday, and his sister Princess Anne and brothers Princes Andrew and Edward, will keep a silent vigil around the coffin, joining the ceremonial guard for a 15-minute period.

“I’ve no sensation in my knees at all or my legs,” said Hyacinth Appah, a mourner from London who was in the queue.

“But it’s been fine. Most of the people have been lovely and we’ve had quite a nice time.”

Another mourner from London, Naomi Brown, said she waited for nearly 11 hours after joining the queue on Thursday night after work.

“I just thought, I’m never going to do it again. I have so much respect for the Queen, not once did she ever falter,” 29-year-old Brown said, speaking to Reuters as she neared the front of the queue.

“She has been such a good symbol for our country. It feels like we have lost a family member.”

The coffin stands in the ancient Westminster Hall on a purple catafalque, draped in the Royal Standard and with the bejewelled Imperial Crown of State placed on top.

Soldiers in ceremonial uniform and other officials are keeping vigil around it as people walk past to pay homage after their long wait. Many have been in tears, and others have saluted or bowed their heads.

London’s police force said on Friday the state funeral would be the biggest security operation it had ever undertaken as prime ministers, presidents and royals come together to pay their respects.

U.S. President Joe Biden and French President Emmanuel Macron are among the guests from overseas who have confirmed they will be attending.

King Charles, who acceded to the throne on his mother’s death, meanwhile was visiting Wales, the last stage of a tour of the United Kingdom to acknowledge his status as the new monarch and head of state and to greet the public mourning the loss of Elizabeth.

Charles and his wife Camilla, the Queen Consort, attended a service at Cardiff’s Llandaff Cathedral service then greeted cheering well-wishers outside. He was also visiting the Welsh parliament and meeting Welsh first minister Mark Drakeford and other politicians.

Wales has a particular significance for the new King, who for five decades preceding last week’s accession had the title Prince of Wales.

“His passion and affection for Wales has been clear,” his spokesman said. “He has shown a life-long commitment to the country’s people.”

The Queen’s eight grandchildren, including the new Prince of Wales, Princes William, and his brother Prince Harry, will stand vigil at the coffin on Saturday evening, a royal spokesman said.

In an adjustment to protocol, both Harry and his uncle Prince Andrew will be allowed to wear military uniform when they take their turns, royal officials said.

Both are war veterans, Andrew having served as a Royal navy helicopter pilot in the Falklands War and Harry serving two tours of duty with the British Army in Afghanistan.

But so far they have appeared in processions in morning suits as they lost their honorary military titles when they stepped back from public royal duties.

William was, on Friday, visiting troops from New Zealand, Canada and Australia who are in Britain to take part in events around the state funeral.

He was accompanied by his wife Kate, the new Princess of Wales. The title was previously held by William’s mother Diana, killed in a car crash in 1997.

Diana’s death likewise prompted a national outpouring of grief, and William spoke on Thursday of how the solemn events of the last week had revived memories of the funeral procession for Diana.

On Wednesday, William, alongside Charles and Harry, walked in a procession behind a gun carriage carrying the Queen’s coffin from Buckingham Palace to the Palace of Westminster, a scene reminiscent of when, as boys 25 years ago, the princes had followed Diana’s casket.

“The walk yesterday was challenging … brought back a few memories,” William said as he and Kate spoke to well-wishers and viewed the sea of floral tributes outside the royal residence of Sandringham in eastern England.

The state funeral is likely to be one of the grandest ceremonies ever seen in the British capital, involving thousands of military personnel.

Earl Marshal, Edward Fitzalan-Howard, the Duke of Norfolk, who is in charge of state occasions, said he hope the funeral “will unite people across the globe.”

London’s Heathrow Airport has said it will cancel 15 per cent of its flight schedule on Monday to reduce noise over the city and guarantee that the skies will be quiet during a two-minute silence at the end of the funeral.

Monday has been declared a national holiday. Many shops and supermarkets will be closed and a range of other economic activities will grind to a halt. Thousands of people face cancelled doctor appointments or operations under the state health service.