Queen Elizabeth II’s State Funeral: A Timeline of the Planned Events For the Day 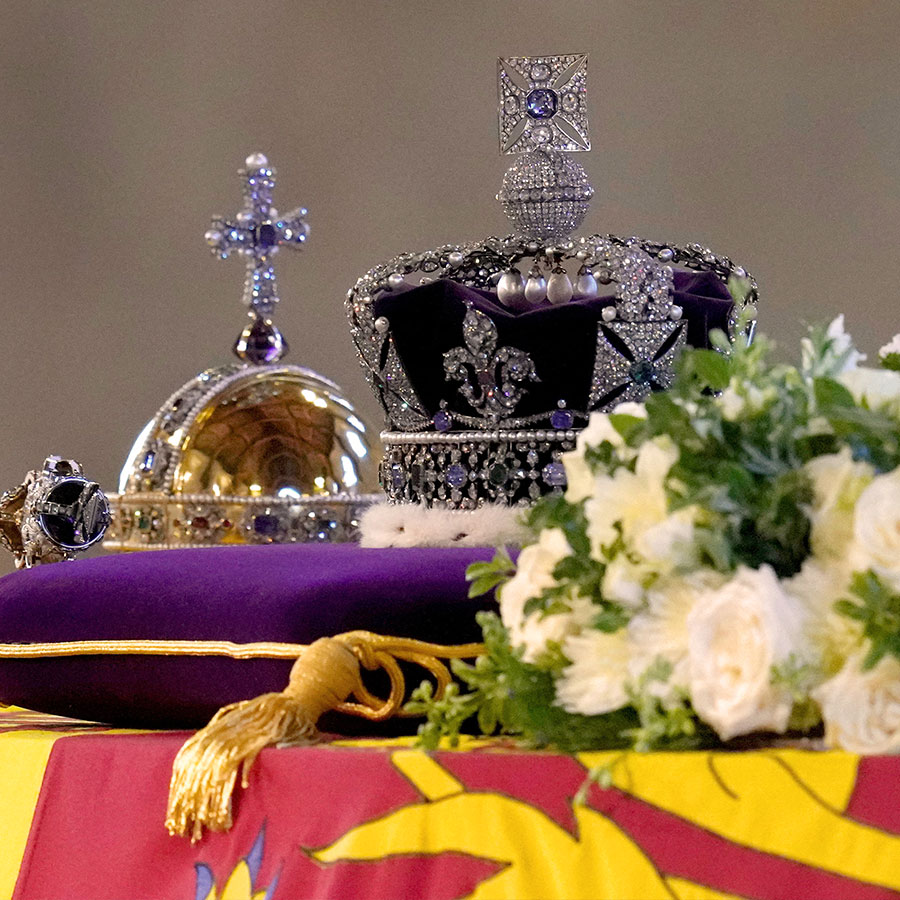 The coffin of Queen Elizabeth II, draped in the Royal Standard with the Imperial State Crown and the Sovereign's orb and sceptre, lying in state on the catafalque as members of the public file past in Westminster Hall, at the Palace of Westminster ahead of her funeral on Monday. Photo: Kirsty Wigglesworth/Pool via Reuters

World leaders will join Britain’s Royal Family, its political elite and members of the military, judiciary and charities at the state funeral for Queen Elizabeth II on Monday.

Below are details of what is expected on the day:

– Shortly after 10:35 a.m. (5:35 a.m ET) a bearer party will lift the coffin from the catafalque and carry it to the State Gun Carriage of the Royal Navy.

– The route, passing by Parliament Square, will be lined by the Royal Navy and Royal Marines.

– The procession will be led by Scottish and Irish regiments, the Brigade of Gurkhas and the Royal Air Force numbering 200 musicians. The gun carriage will be flanked by detachments of The King’s Body Guards of The Honourable Corps of Gentlemen at Arms, The Yeomen of the Guard and the Royal Company of Archers.

– The coffin will be followed by the King and members of the Royal Family.

– Heads of state and overseas government representatives, including foreign royal families, governors-general and prime ministers of the realm will gather at the Royal Hospital in Chelsea and travel together to the Abbey.

– The congregation will be made up of representatives of the realms, the Commonwealth, parliament, devolved parliaments, her majesty’s patronages, plus the law, emergency services and public professions.

– The state funeral will begin at 11.00 a.m. (6:00 a.m. ET), conducted by the Dean of Westminster. Prime Minister Liz Truss and Secretary General of the Commonwealth will read lessons.

– The sermon will be given by the Archbishop of Canterbury who will also give the commendation, the Dean will pronounce the blessing.

– The last post will sound towards the end of the service at approximately 11.55 a.m. (6:55 a.m. ET) followed by a two-minute silence in the Abbey and throughout the United Kingdom.

– Reveille, the national anthem and a lament played by the Queen’s Piper will bring the state funeral service to an end at approximately 12.00 p.m. (7:00 a.m. ET)

– The bearer party will return the coffin to the State Gun Carriage, followed by the royal family.

– The route will be lined by the armed forces. The procession will include representatives from the Commonwealth, Canadian police, health workers and others. The procession is formed in seven groups, each supported by a service band.

– Minute guns will be fired in Hyde Park by The King’s Troop, Royal Horse Artillery. Big Ben will toll throughout the procession.

– The procession will arrive at Wellington Arch at 1.00 p.m. (8:00 a.m. ET) The bearer party will place the coffin in the hearse to travel to Windsor. As the hearse departs, the parade will give a royal salute and the national anthem will be played.

– The Royal Family will travel to Windsor by car.

– The route will be lined by the armed forces, minute guns will be fired. Both the Sebastopol Bell and the Curfew Tower Bell will be tolled.

– Prior to the final hymn, the Imperial State Crown, the Orb and the Sceptre will be removed from the coffin and placed on the Altar.

– The King will place The Queen’s Company Camp Colour of the Grenadier Guards on the Coffin. The Lord Chamberlain will “break” his Wand of Office and place it on the coffin.

– As the coffin is lowered into the Royal Vault, the Dean of Windsor will say a Psalm. The commendation before Garter King of Arms will pronounce the styles and titles of the Queen.

– The Sovereign’s Piper will play a lament. As he walks away, the music inside the chapel will gradually fade.

– The Archbishop of Canterbury will pronounce the blessing, followed by the singing of “God Save The King.”

– At 7.30 p.m. (2:30 p.m. ET) a private burial service will be attended by the family. The Queen will be buried with her husband, Prince Philip, at the King George VI Memorial Chapel.