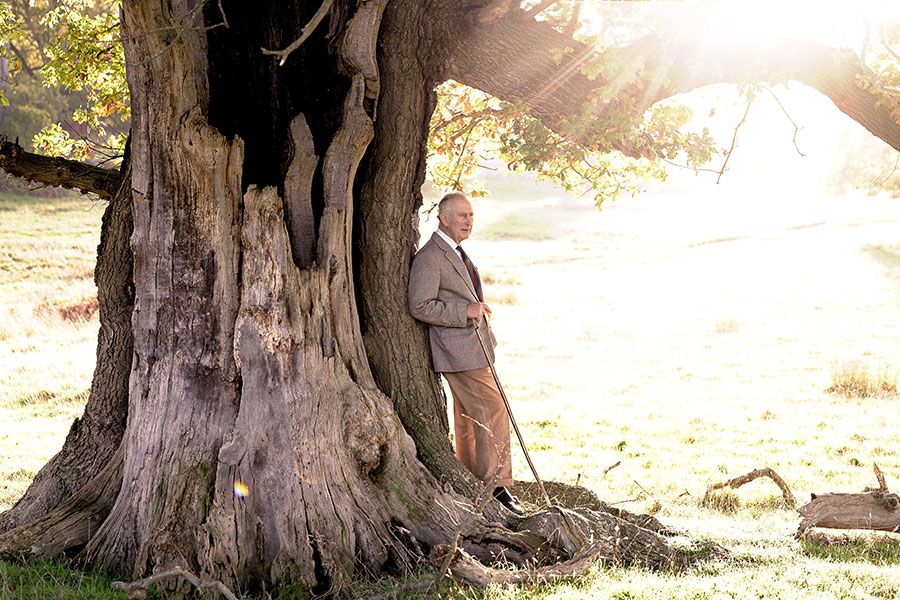 His Majesty King Charles III stands beside an ancient oak tree in Windsor Great Park to mark his appointment as Ranger of the Park, Nov. 11, 2022. The tree that His Majesty is pictured under is one of many veteran and ancient oak and beech trees that make Windsor one of the largest and most important collections in North Europe. Photo: Chris Jackson/Getty Images

King Charles III celebrates his 74th birthday today, his first as sovereign. Buckingham Palace released a new photo of the King to mark the occasion from royal photographer Chris Jackson. He is casual in a checked suit jacket and khakis, walking stick in hand, leaning up against a giant oak tree. The purported reason, to mark his new role as Park Ranger of Windsor Great Park, also underscores his personal lifelong commitment to environmental issues, in a subtle way.

This is to be a low-key birthday for Charles, following the death of his mother in September. Yesterday was Remembrance Sunday, one of the most sombre days on the royal calendar, on which the monarch lays a wreath at the cenotaph in a ceremony that his late mother considered to be one of the most important duties on her calendar.

The palace announced that there would be no formal celebration of the King’s birthday today, and that Charles plans to spend the day at home with family. It has not yet been announced if the King will carry on the tradition of the monarch having two birthdays. The Queen was born in April, but her birthday was celebrated along with Trooping the Colour in June. This odd scenario is a tradition in the Royal Family (going back to the reign of King Charles II in 1748), that should the monarch’s actual birthday fall in a season of Britain’s notoriously bad weather, it would be moved to June, which is better for public celebrations and the accompanying pomp and ceremony atop horses. Nov. 14 is certainly likely to qualify on the bad weather front, but King Charles has also been clear he wants to streamline the monarchy, reducing expenditures and the number of working senior royals, so it is possible he won’t indulge in a second birthday.

There were gun salutes, however, as the British do love to honour the Royal Family with ceremonial gunfire. But first, the Household Cavalry band played “Happy Birthday” at Buckingham Palace at 11 a.m. local time. Charles does not currently live at the palace, the centre of the monarchy in London, as it is being extensively refurbished, he continues on at Clarence House nearby, where he has lived since the death of the Queen Mother. Charles himself was born at Buckingham Palace.

At noon in London, a 41-gun salute was performed at Green Park by the King’s Troop Royal Horse Artillery, along with another rendition of “Happy Birthday.” Finally, at 1 p.m. local time, at the Tower of London, a 61-gun salute took place.

From his very first birthday, as a cherub in a dress (in either a very progressive genderless gesture for 1949, or an odd royal sartorial glitch around formal clothes for princes). His third birthday cake was saved for posterity; it featured tin soldiers out of royal icing. On his fourth birthday he was presented with a galleon with Prince Charles upon the main sailing mast.

But it was his big birthdays that stood out. His 21st signalled his investiture as Prince of Wales. His 40th birthday was celebrated with 100 underprivileged children who were served by his Prince’s Trust charity.

The Big 5-0 marked a turning point in Charles’s life, larger than middle age: the 1998 black-tie gala thrown for him was the “coming out” party for his relationship with Camilla. She acted as hostess of the affair at Highgrove, his Gloucestershire country home (formerly shared with Princess Diana). Some 250 guests gathered to fête the prince.

But it was Charles’s 70th birthday that really upped the ante: Queen Elizabeth invited royals from all over Europe for a Buckingham Palace blowout and all the jewelry came out of the vault. This was 2018, so Meghan and Harry attended, along with William and Kate and all the royal cousins.

Looking back now, his 70th birthday fête was part of an entirely different era, even though it was only four years ago. It was before the drama of Harry and Meghan leaving for America, before Prince Philip and then the Queen died, and of course, before the pandemic. Looking back on the photos now is poignant, and must be especially so for the new King.

Birthday Wishes Pour in For the King

Members of the royal family, world leaders and others took to social media to wish King Charles a happy birthday.