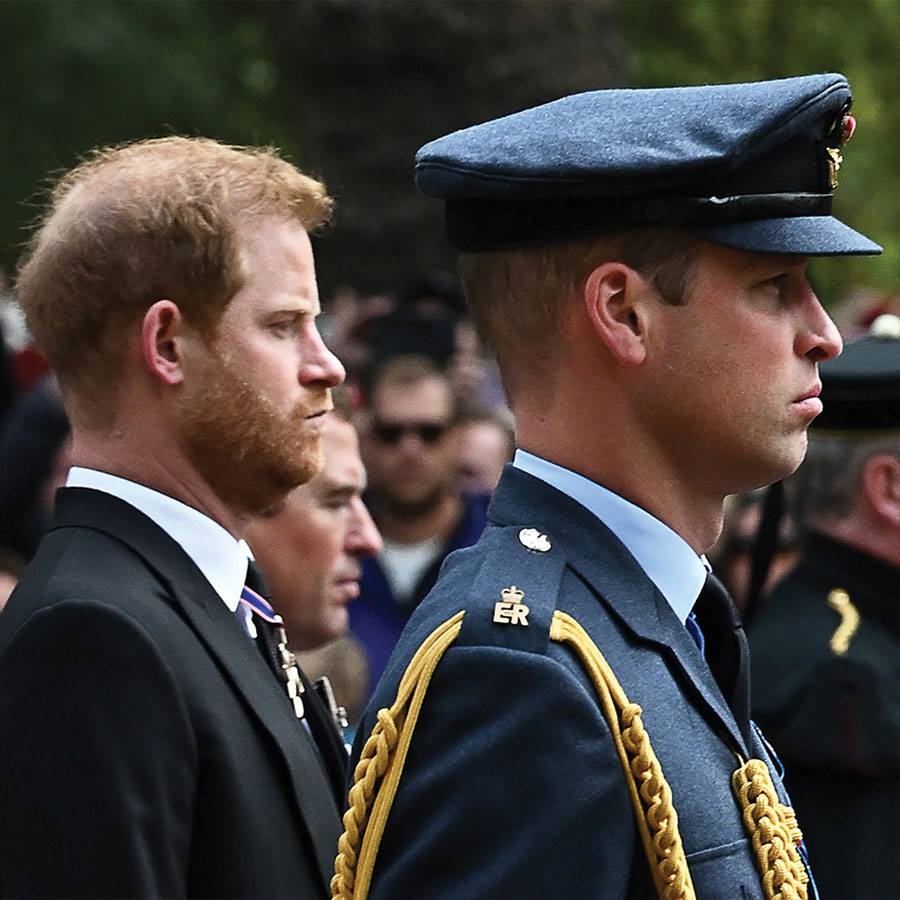 Prince Harry says older brother and heir to the throne Prince William knocked him to the floor during a 2019 argument over Harry’s American wife Meghan in his much-awaited memoir which went on sale days early in Spain.

The altercation between the brothers, the sons of King Charles, is detailed in Harry’s book Spare which was due to be published on Jan. 10, but Reuters and other media have been able to obtain copies in Spain.

Details of its contents also come as ITV released a clip of an upcoming interview with Harry in which he said he could not commit to attending his father’s coronation in May.

In the book, Harry says the 2019 brawl with William took place at Harry’s London home. William had called Meghan “difficult”, “rude” and “abrasive”, which Harry said sounded like “the press narrative” about his wife.

“He grabbed me by the collar, ripping my necklace, and he knocked me to the floor,” Harry wrote.

“I landed on the dog’s bowl, which cracked under my back, the pieces cutting into me. I lay there for a moment, dazed, then got to my feet and told him to get out.”

William then challenged his younger brother to hit back but Harry refused. William later returned to the scene, “looking regretful, and apologized”, Harry wrote, with his brother asking him not to tell Meghan that he had “attacked” him.

Spokespeople for King Charles and Prince William have declined to comment.

William and Harry were once seen as very close after the death of their mother, Princess Diana, in a Paris car crash in 1997. But the brothers have fallen out since Harry married Meghan, a former actress, in 2018 and the couple then stepped down for royal duties to move to California two years later.

Since their departure, the Duke and Duchess of Sussex, as the couple are officially known, have delivered stinging criticism of the Windsors and the British monarchy which has included accusations of racism which William himself has dismissed.

Last month, their six-part Netflix documentary, which attracted record audiences, aired with renewed accusations including that William had screamed at Harry during a crisis summit to discuss his future.

The main criticism from Harry and Meghan is that royal aides not only refused to hit back at hostile, inaccurate press coverage but were complicit in leaking negative stories to protect other royals, most notably William.

“I don’t know how staying silent is ever going to make things better,” Harry said in Thursday’s ITV clip.

Asked why he was invading the privacy of his family, something he had railed against, he replied: “That will be the accusation from the people that don’t understand or don’t want to believe that my family have been briefing the press.”

Heir and a Spare

The title of his book Spare comes from an oft-cited quote in British aristocratic circles about the need for an heir, and a spare.

According to extracts reported by the Guardian newspaper, the first publication to obtain a copy, King Charles reputedly said to Diana on the day Harry was born: “Wonderful! Now you’ve given me an heir and a spare — my work is done.”

The book also recounts “intensely private scenes and conversations”, the Guardian said, such as describing his memories and love of his mother, who was killed in a 1997 car crash, and grandmother Queen Elizabeth, who died last year at age 96.

How much the disclosures will resonate with the public is unclear. A YouGov poll this week found 65 per cent of those surveyed were “not interested at all” in his upcoming book, while another found greater sympathy among respondents for William and his wife Kate than for Harry and Meghan.

Charles himself is still hoping for a reconciliation with his son, unnamed sources told newspapers this week.

In its leaked extracts, the Guardian says the king had stood between his two sons during a difficult meeting at Windsor Castle following the April 2021 funeral for their grandfather Prince Philip, the late queen’s husband. Prince Harry declined to commit to going to the coronation of his father King Charles, according to a clip from an upcoming interview with broadcaster ITV, adding that staying silent about his issues with the British royal family would not help matters.

Harry, the younger son of King Charles, has recorded two interviews with broadcasters to air before the publication of his memoir Spare next week which could see him deliver further stinging criticisms of the royal family and their aides.

Asked if he would attend the coronation if he is invited, Harry says: “There is a lot that can happen between now and then. But, you know, the door is always open, the ball is in their court.

“There’s a lot to be discussed and I really hope that they are willing to sit down and talk about it.”

The clip was posted by ITV on Twitter on Thursday, hours after the Guardian newspaper released extracts from his book in which he accused his elder brother William of knocking him to the floor during an argument.

“I don’t know how staying silent is ever going to make things better,” Harry said.

When asked about William’s reaction to his criticisms since stepping down from royal duties in 2020, Harry replied: “He’d probably say all sorts of different things.”

The ITV interview and a separate appearance on U.S. broadcaster CBS’s “60 Minutes” programme will be shown on Sunday, two days before publication of Harry’s autobiography.

The book reveals details about Harry’s relationship with his father, King Charles, his elder brother, Prince William, and other members of the British royal family that have never previously been published.

As is usual for the royal family, spokespeople for Charles and William have declined to comment.

Following are some of the key details outlined in the book:

Harry says his brother William, now heir to the British throne, knocked him to the floor during a 2019 argument at his London home over Harry’s American wife Meghan. William called Meghan “difficult”, “rude” and “abrasive”, Harry writes.

He says William grabbed him by the collar and knocked him to the floor, where Harry says he landed on a dog’s bowl, cracking it. He says he refused William’s challenge to hit back and that his brother later apologized over the incident.

Harry says that he and Prince William had asked their father not to marry Camilla Parker-Bowles, who is now Britain’s Queen Consort. Nonetheless, he writes that both he and William ended up wishing their father a happy marriage and had some sympathy for their relationship.

“Despite the fact that Willy and I asked him not to do it, my father went ahead. Despite the bitterness and sadness we felt in closing another loop in the history of our mother, we understood this was irrelevant.”

DRESSING AS A NAZI

Harry says he was encouraged by Prince William and his wife Kate to go dressed as a Nazi to a fancy dress party in 2005, in what he has described elsewhere as “one of the biggest mistakes of my life”. Harry says he visited a costume shop and found several options for the party. He called William and Kate for advice and said they immediately suggested the Nazi uniform.

Harry dismisses media rumours that he was the result of an affair between Major James Hewitt and his mother Princess Diana and suggestions that his father had often joked about not knowing who Harry’s real father was. Harry, now 38, says the idea is absurd, given that his mother did not meet Hewitt until long after he was born.

Harry claims the royal household dragged its feet over the date and venue for his wedding with Meghan. He says that when he consulted his brother about the possibility of marrying in Westminster Abbey or St. Paul’s Cathedral, William said he could not marry there because they had been venues for the weddings of Charles and Diana and of William and Kate respectively. Instead, William suggested a village chapel near Charles’ home at Highgrove House in the Cotswolds, southwest England. Harry and Meghan finally got married at St George’s Chapel, Windsor Castle, in May 2018.

Harry says that when he was 17 he was offered a line of cocaine at someone’s house and consumed the drug on several other occasions, although he insists media reports suggesting he was a drug addict were false and that he did not enjoy it.

“It wasn’t much fun and it did not make me feel especially happy as it seemed to do to everyone else, but it did make me feel different, and that was my main objective. I was a 17-year-old boy ready to try anything that altered the pre-established order,” he writes.

Harry also recounts how, as a student at the exclusive Eton College, he used to smoke cannabis in a bathroom at his house while the Thames Valley police served as his bodyguards, patrolling the exterior of the building.

Harry describes meeting a woman with “powers” who said she could feel Princess Diana’s spirit. He says the woman was recommended by friends and that, while he had his doubts about her, as soon as he sat down with her “I felt an energy around her”.

“Your mother says that you are living the life that she couldn’t live, the life she wanted for you,” Harry quotes the woman as telling him.

But Harry says he was still sceptical and wanted more proof. The woman told him Diana mentioned a Christmas decoration. Harry said it must have been the one his son Archie had tried to fix.

Harry describes how during a trip to the North Pole he suffered from early stages of what appears to be frostbite, including to his penis. He recounts telling his father about his injuries at a dinner on the eve of William’s wedding.

“My father showed interest and sympathized with me when I mentioned that my ears and cheeks had burned due to the cold. I struggled to contain myself to not talk too much and tell him that my penis had also been affected …”