‘Spare’: What We Learned From Prince Harry’s U.K. and U.S. Interviews Prior to the Release of His Memoir 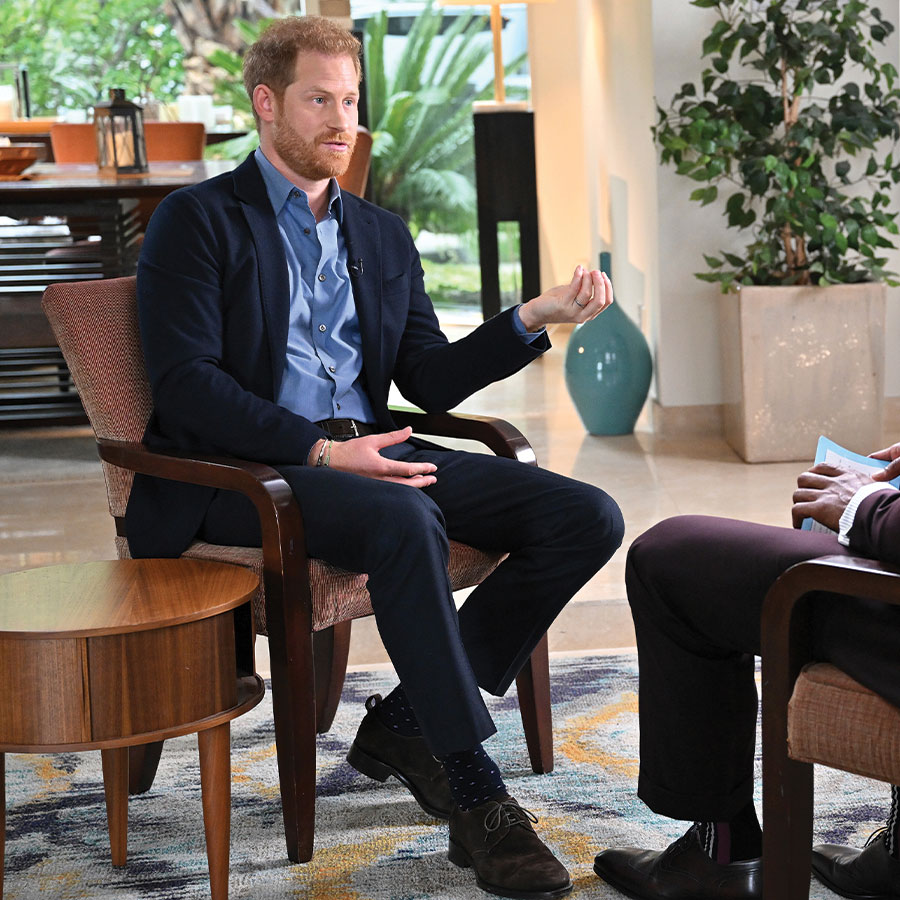 Prince Harry on 60 Minutes was a deeply moving interview Sunday night. Anderson Cooper somehow captured a moment with the prince that felt fresh amid a maelstrom of Harry TMI. It proved that television can still have enormous power to connect us, even with the most famous of the famous. For the first time in a long time, Harry was there in front of us, raw, living and breathing. You felt for him, he was familiar and sympathetic, and even relatable: For all his extraordinary circumstances, he is at heart a boy inside a now-grown man who was alienated from his family. Family pain is nearly universal, after all. You believed him, and all his truth, and all his pain.

That isn’t to say that his truth documentary and book and publicity tour isn’t fully exhausting. Because it is also that. All that pain, all the revelations, it is wearing on our empathy. The small insults — William, or Willy as Harry (nickname: Harold) calls him, is balder than he is, is a snark that stands out — weigh down the big issues. And there are big issues Harry has to talk about, from press intrusion and manipulation to institutional bias and outdated “traditions” that made family life inside the Windsor’s many gilded palaces impossible for the Sussexes.

With the early leaks of the copies of his book Spare ± which isn’t published until tomorrow —  it feels like Harry has been everywhere this weekend, with all the news, personal tidbits, scandal and betrayals disseminated in a steady shriek of British tabloid headlines. I’m personally still keen to believe in the power of the printed word, and of context, and plan to read the book upon its release at midnight tonight. Hopefully, like the Cooper interview, it will connect more powerfully than all the ugly stories that popped up on my phone all weekend, as a few fresh pages were translated from the Spanish copies that were released five days early.

The official publicity tour launched Sunday at 9 p.m. U.K. time with his 90-minute interview with Tom Bradby, an old friend of the duke’s, and the ITV personality who produced the South Africa clip of Meghan saying, “I’m not okay, thank you for asking,” that was the first inkling of the despair behind the Sussexes’ leave-taking of senior working royal life. Next came the Cooper interview Sunday night. Then another with Good Morning America anchor Michael Strahan.

Yes, there were a few fresh facts — already carved out into fresh steaming headlines ± from each interview. But before we get to that recap, let’s look at the whole phenomenon here. Interestingly, the newspaper broadsheets (a British term, for more “serious” and properly sourced media), have not been panting and publishing all the leaks from Spare. Instead, the most significant story in The Sunday Times of London had to do with how King Charles III’s coronation plans had changed. Citing close sources — you can presume those are the palace mouthpieces Harry talks about so often — it seems all the royal dukes (Harry, Andrew) will not have to kneel before the King and kiss his right cheek; only William as the heir will perform that part of the ceremony.

Speculation (in the tabloids) has been rife about “punishment” for Harry, and by extension Meghan, who has been a scapegoat through this process: loss of titles, excommunication, etc. But the King and William, who have borne the brunt of Harry’s criticism have remained resolutely silent thus far. Even the supposed “red lines,” about criticism of Camilla, Queen Consort, and the Princess of Wales, have not drawn a statement.

The only thing posted on palace sites this morning are simple discreet birthday wishes for the Princess of Wales, who turns 41 today.

Here is a quick rundown of the new reveals we got from the three major TV sit downs with Harry.

From the ITV broadcast: In the 90-minute interview with Tom Bradby, Harry did say that he did not believe the British family was racist. He did, however, say that they were “complicit” in helping the British media “trash” Meghan’s reputation, which led to the couple leaving the country. He also accused Camilla of leaking to the papers in her quest for the crown. He recounted how William and Kate never really got along with Meghan from the start, “stereotyping” her as a “biracial, American actress” who was divorced. He surprisingly defended Lady Susan Hussey, the Queen’s lady-in-waiting who resigned following a social-media driven race row at a palace reception. Most searingly, he describes the “really, really horrible reaction” he faced from family members the day the Queen died, after having been told by his father that wife Meghan was not welcome at Balmoral.

The Cooper interview further revealed that Harry was not invited on the private flight to Scotland along with brother, William, uncles Edward and Andrew and aunt Sophie. He spoke also about how psychedelic therapies had helped him break through his grief for his mother, after years of numbing himself and trying to elicit an emotional response to her tragic death that had unleashed such a roar of emotion in the public. But it was more the way that the familiar 60 Minutes format, and Cooper’s concise phrasing and framing of questions and issues, that made the interview somehow more affecting than the other sit downs. It didn’t have the ba-dum-bum! cymbal smash of the Oprah interview. Cooper didn’t react with a dropped jaw. He stayed calm and inscrutable, and Harry matched his gravitas. It really helped the messaging.

As for the Good Morning America interview, the big reveal was about how Harry saw the Queen’s take on the Sussexes’ exit: “I had many conversations with her in the U.K. over the years and in the run up to the point of change, so it was never a surprise to anyone, least of all her.”

“She knew what was going on,” said Harry. “She knew how hard it was. I don’t know whether she was in a position to change it.” Harry reiterated what is his now consistent line about reconciliation, that he is open to it, but demands accountability. He said he is doing this to correct history, and for the next generation of royal children, including his own.

So. Less than 24 hours until the release of the book that earned him a US$35 million advance, it feels like there is so very little we could still possibly learn — after the frostbitten penis, the smashed dog bowl, the rewritten narrative of the Nazi uniform — but I would argue that texture, and context, still matters. So, I will be up tonight at midnight to crack the spine (metaphorically) on my Kindle copy. Promise to report back soon after.