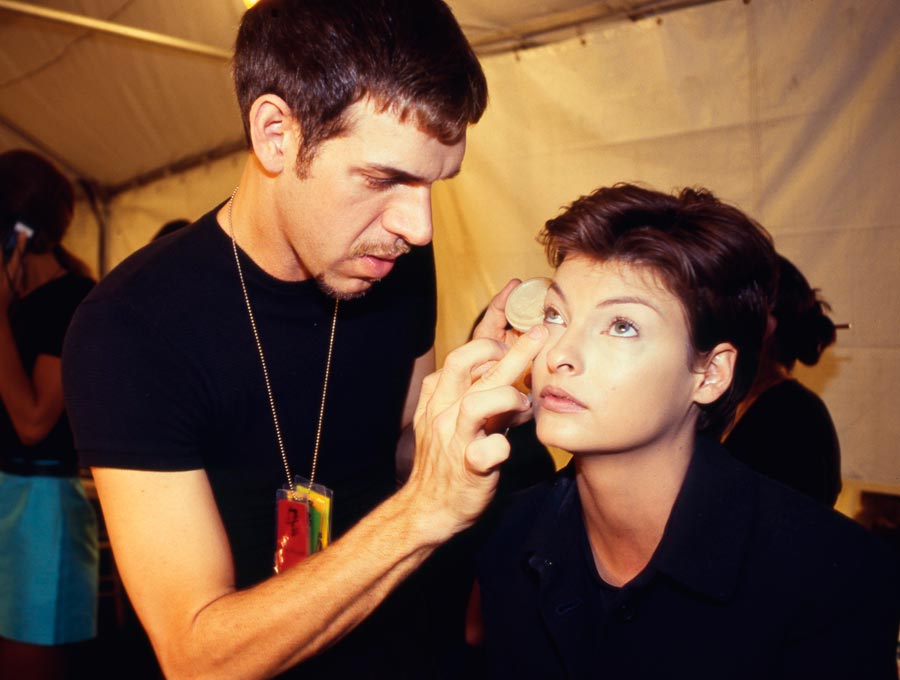 From almost the moment he arrived in New York in 1982 until his untimely death in 2002 at the age of 40 from complications of opioid toxicity, Kevyn Aucoin dominated the beauty industry and became a household name—all before he ever had a namesake brand. Aucoin was equal parts artistic genius, creative visionary and perhaps above all, vocal forerunner of inclusivity. The new feature documentary Larger Than Life: The Kevyn Aucoin Story directed by Tiffany Bartok chronicles the extraordinary life of the first celebrity makeup artist, a man who changed the face of modern beauty and in the process, became a superstar himself. He appeared in countless CNN , MTV and The Oprah Winfrey Show interviews, backstage at the Academy Awards and as himself in Zoolander and the infamous Sex & the City fashion runway episode. Cher, who says her life would be “so much richer if he was still alive,” remembers how on their frequent makeup shopping expeditions even at the height of her music comeback it was Aucoin, not her, who was catnip to gushing sales associates.

He Helped Create the Supermodel

In many cases, Aucoin’s was the unseen hand – the unseen giant, bear-paw hand— who created iconic fashion moments: his debut Vogue cover in 1986, for example, was also Cindy Crawford’s first Vogue cover. Larger Than Life accomplishes that rare feat: it gets all the supes to talk about the era and about their friendship in and out of the makeup chair. Naomi Campbell, for example, says she wouldn’t sit in anyone’s chair but his because he understood black skin; Kate Moss wistfully longs for just one more night of dancing around Aucoin’s apartment with him. This was a time when the separate worlds of fashion and entertainment came together, and Paulina Porizkova likens their 1980s heyday to a wave gathering energy to become a typhoon that became the powerful 1990s.

He Promoted Beauty of All Ages

Along with his then five-year-old sister, his mother was his muse. Because more than an approach to makeup, Aucoin had a philosophy of beauty. “I have been working towards acceptance of diversity in this business,” the makeup artist confides in an on-camera interview with FashionTelevision’s Jeanne Beker, “Because I don’t believe that one person – Vogue or any other big magazine — should be able to say ‘This is the new look’ and everyone has to wear that.”

Breakout unconventional work with Liza Minelli proved his point, breaking down barriers about age and promoting different expressions of glamour. “By doing Liza it was challenging an assumption,” Allure magazine founder Linda Wells says, “about what the media considered beautiful. She was absolutely stunning but she was not in the typical assumption for age or beauty that you would think a big mass-market beauty magazine would do.” That also included working on photo series with Isabella Rossellini (this is, remember, shortly after Lancôme had fired the longtime spokesmodel for being ‘too old’ — at 43). From his earliest makeup moments, Aucoin challenged the norm. “There’s no set standard, I don’t think,” he told a local TV station. “Because I find beauty in everything.”

Interviews are peppered with the makeup artist’s own private hand-held footage, because Aucoin was also a forerunner of constant self-documentation: his daily video diaries began in his teens and ranged from staged skits and mockumentary news videos to behind the scenes takes. He recorded and kept everything, from answering machine cassettes to DV tapes and meticulous scrapbook collages assembled in his appointment book with notes, Polaroids and memories of working with Janet Jackson and Cher. “It’s like he needed evidence that this was really happening.”

It’s through these we’re privy to the unscripted and intimate moments on set — like with Minelli and Isaac Mizrahi, for example, at an ironing board bursting into song. Downtime in a Paris hotel room with Christy Turlington. Laughing while touching Whitney Houston up on the set of her “Where do Broken Hearts Go” video or Tina Turner on the set of “I Don’t Wanna Fight.” In one magical glimpse we see Celine Dion looking in the mirror mid-makeover and slowly smiling to herself, as though she’s seeing her beauty for the first time. Larger Than Life captures a candour that’s almost impossible to imagine today — the end of innocence on the eve of today’s 24/7 celebrity coverage, curated social feeds and heavily massaged ‘official’ behind the scenes glimpses that were born alongside the internet.

He was A Vocal LGBTQ Activist

Growing up in Louisiana in the 1960s he was the adopted son of loving parents, but anything that went outside the lines about who you were supposed to be didn’t fly with the community at large. For every Led Zeppelin poster on his brother’s side of their shared bedroom, he had one of Barbra Streisand. He enjoyed things that were considered girlish, like drawing, instead of sports like baseball.

“It put a target on his back,” sister Carla recalls of his effeminate behaviour, and how he was bullied by grade school teachers, relentlessly abused and brutally beaten (“constantly”) by classmates while teachers looked the other way. “I had to quit high school because two kids tried to kill me in a pickup truck,” he once told a journalist. Aucoin charity of choice was the Hetrick-Martin Institute, a drop-in centre for gay youth that provides a safe space to support and empower LGBTQ youth.

He Believed in Democratic Beauty and Diversity

At Vogue in the 1980s era of big hair and major makeup, when he cleverly went against the grain and did an understated, simple look on Meg Tilly — ‘natural with a little bit of a twist.’ It was revolutionary, according to beauty blogger Lisa Eldridge, and it’s why Revlon hired him as the creative director of Ultima II when he was only 21; it’s there that he created The Nakeds, a palette that everyone could use — in shades more inclusive than any other mainstream industry brand at the time. The shades recall Aucoin’s humble, self-taught beginnings when he practiced his craft by giving over-the-counter makeovers to the African-American women in Lafayette that the shop’s seasoned sales associates wouldn’t help.

Aucoin’s New York Times bestsellers like Making Faces and Face Forward weren’t merely gorgeous, artful coffee table books — they acted as guidebooks, road maps that inspired empowered everyday women of all ages to look and feel beautiful with encouragement and possibility. The book launch of his groundbreaking 1994 book The Art of Makeup was studded with star guests from Crawford and Jackson to RuPaul and Mary Tyler Moore that reflected this inclusive approach.

Even his famously outrageous makeovers played a part — like shaping Brooke Shields to resemble a boy through strategic hair and makeup. “His love for beauty but also creation sort of infected all of us,” Shields remembers of that session. But he also challenged the norms of gender identity of the industry he worked in — in one instance, as Wells recounts, slipping a male model in among the women for a shoot without telling the sittings editor. That’s how the documentary begins with a home movie close-up on a model’s striking eyes and a gorgeously made-up face. The camera slowly zooms out to eventually reveal that the model is a young man.

Wells says she thinks Aucoin’s work was part of a larger mission, to right a wrong from a childhood where he felt ugly and unloved. It’s also why he revered the women that he worked with and connected with them, and they came in all sizes, races and ages. “It’s not what he could do with eyeliner, honey, it’s what he could do holding your hand,” is how friend, makeup artist and early mentor Eddie Greene puts it.

For Better or For Worse, He’s Responsible for Today’s Beauty Culture

From aesthetics to formulations, Aucoin invented details and styles that today we consider to have simply always existed (like his eponymous cult following product Sensual Skin Enhancer). Because of his raw talent, his range could go big and he could do simple. DIY video tutorials? Years before YouTube there was Aucoin with his hand-held video camera. Contouring? Love it or hate it, that was Aucoin too — and Kim Kardashian’s go-to makeup artist Mario Dedivanovic pops up in Larger Than Life to give credit where it’s due, as his major inspiration for the ubiquitous flawless sculpted and highlighted look that’s become known as ‘Instagram makeup.’

The makeup artist left behind an incredible legacy, not least the one he articulates himself. They’re the words that Bartok chose to open the documentary: “What were we talking about? Oh yeah right, Beauty…,” Aucoin whispers into his omnipresent video camera. “The most extraordinary experience for me that I could possibly have with another person is to show them their beauty because someway, somehow in showing someone else their beauty you see the beauty in yourself. You understand your own uniqueness and your own strength,” he adds. “And that’s possibly the search we’re all in.”

Larger Than Life: The Kevyn Aucoin Story screens at The Female Eye Film Festival in Toronto, at cities across North America through the summer and will be available digitally from The Orchard on July 31st; for details visit http://www.kevynaucoinfilm.com