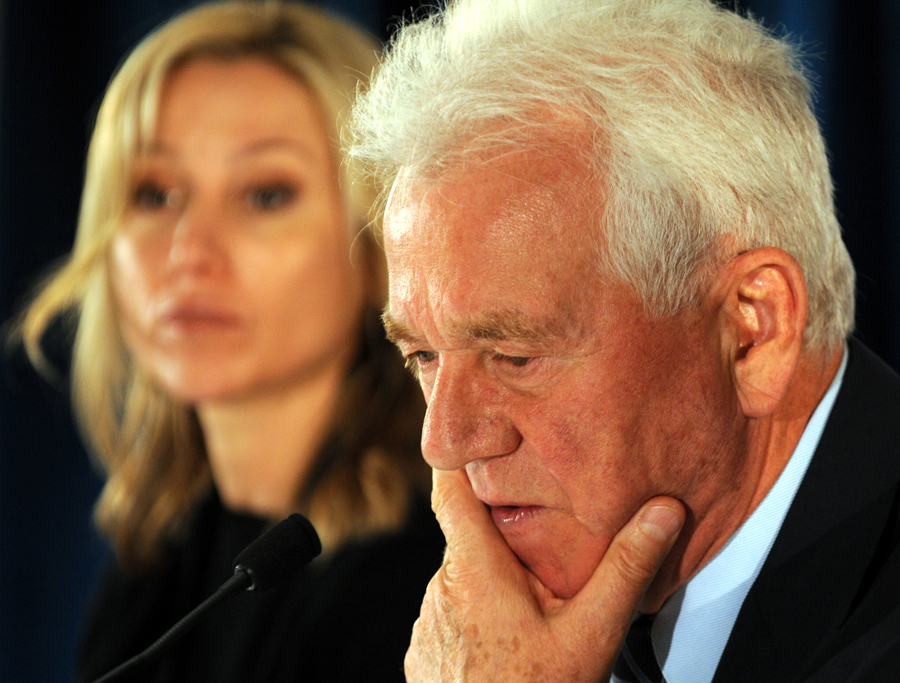 One of Canada’s most well-known and successful entrepreneurial families is waging a legal war … against each other.

According to the Thoroughbred Daily News, Austrian-born Canadian business magnate Frank Stronach, 86, filed a lawsuit in Ontario Superior Court on Oct. 1 against his daughter Belinda Stronach, 52, Nicole and Frank Walker — two of Belinda’s children — and Alon Ossip, the CEO of The Stronach Group (TSG), for allegedly using assets from the family company for their own personal gain while increasingly keeping him in the dark about business operations.

The Thoroughbred Daily News quotes the lawsuit as claiming, “a series of unlawful actions undertaken by Belinda, together with Alon and others associated with them, to appropriate Stronach family assets for their own personal benefit. Belinda and Alon appropriated control over the business and assets of TSG after having concealed their actions from Frank [and other family members] during the period from at least 2011 to November 2016 when Belinda and Alon took the position, for the first time, that Frank was no longer in control of, and had no role in running, the family empire.”

The lawsuit also contends that both Belinda and Alon, “routinely failed to report to work for days or weeks at a time in the period from late 2013 to November 2016, and failed or refused to return calls, emails and texts on a timely basis, or at all, including from members of The Stronach Group and from others associated with the various businesses carried on by The Stronach Group” and that Belinda, “has hired, and continues to hire, her friends and acquaintances to occupy positions of authority in The Stronach Group that they are unqualified to fulfill.”

In addition, it’s claimed that Belinda and Alon informed Frank in 2016 that the then-84-year-old “had no signing authority or ability to access corporate funds” — essentially pushing him out of the company he created around the same time they informed him that the company “was facing significant liquidity issues.” The lawsuit states that, “Belinda and Alon made clear to Frank, Elfriede and employees of The Stronach Group that they intended to exert control over the organization, and to eliminate Frank’s role in the family enterprise that he had created and funded,” while also claiming that Alon, with encouragement from Belinda, “belittled and embarrassed Frank.”

Stronach, whose wife, Elfriede, serves as his co-plaintiff, is asking for $520 million in the lawsuit, which breaks down to “$250 million (CDN) in compensation to the plaintiffs, family trusts, and TSG entities for ‘all losses, damages or harm suffered as a result of the Defendants’ unlawful or oppressive conduct’; $250 million (CDN) in damages ‘against Belinda and Alon for breach of fiduciary duty, breach of trust, and unlawful means of conspiracy’; $20 million (CDN) in ‘punitive, aggravated, and/or exemplary damages’ against Belinda Stronach and Ossip.”

Frank Stronach, who started the Canadian auto parts company Magna International in 1957 and built it into the largest company of its kind in North America, also founded the Stronach Group — which operates a global network of horse racetracks — and currently serves as its honorary chairman. His daughter Belinda, one of Canada’s best-known businesswomen and philanthropists and a former Minister of Human Resources and Skills Development with the federal Liberal government, serves as the company’s President and Chairman — positions she was appointed to by her father. Stronach’s lawsuit calls for her removal from those positions, as well as the removal of Alon Ossip as the company’s CEO.

In a statement, Belinda Stronach said that, “Family relationships within a business can be challenging. My children and I love my father. However, his allegations are untrue and we will be responding formally to the statement of claim in the normal course of the court process.”

Ossip, meanwhile, also denied the allegations and seemingly attempted to distance himself from the family feud in a statement made through a representative.

“Alon has always honoured his obligations and acted in good faith to preserve and grow the Stronach family’s assets and to protect the interests of all members of the family. This is a dispute between Stronach family members that should be resolved between family members.”

For their part, Frank and Elfriede Stronach released a statement saying that they, “regret having to commence proceedings … against their daughter Belinda, Alon Ossip and others (and) only did so as a last resort, after having made considerable efforts over a period of almost two years to resolve the matters at issue on a consensual basis.”