The Year in Fashion: That Coat And Other Looks That Made News in 2018 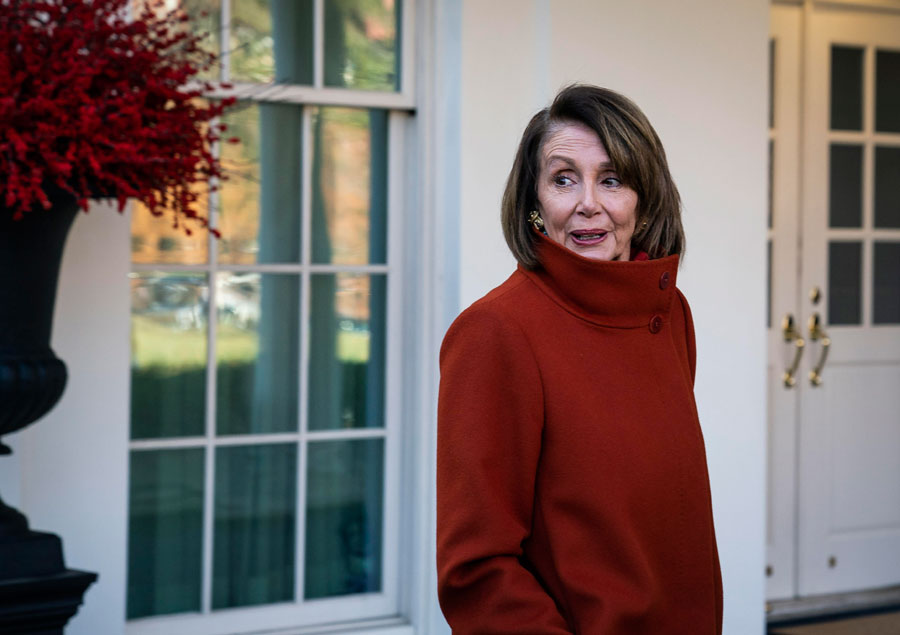 Not just glamorous red carpet gowns, which we indulge in for the escapism and the eye-candy. Or the carefully curated looks of street-style influencers, which we look towards for inspiration. Or the runway looks during fashion week from a heavily hyped designer, which we use to forecast the next big trend.

But occasionally, it takes just one person in a particular garment to ignite seismic style waves that will go beyond the bubble of the fashion world. Yes, a single garment, at the right moment in time, can go down in history for succinctly conveying a message or indicate a shift in the mood of an entire generation.

Here we highlight the headline-making clothes of 2018, as worn by the Zoomer generation. On December 11th, Nancy Pelosi, the House Democratic leader (pictured above with Senate Minority Leader Senator Chuck Schumer), had a heated Oval Office meeting with President Trump regarding a potential government shutdown and funding for his long-proposed border wall. The televised meeting showed Pelosi in command and cooly correcting the President on certain legislature.

But it was her triumphant exit from the White House, dressed in a brick-red funnel neck coat and dark sunglasses which ignited a storm on social media. Perhaps it was the buttoned-to-the-neck style of the coat which gave the illusion of armour or the fiery colour, which seemed to indicate – as various memes illustrated – she had cooly emerged from hell, but this was an image of a powerful coat on a confident woman.

It was the Oscar-winning director of Moonlight, Barry Jenkins, who perfectly summed the look up on Twitter; “This is diplomacy in motion, soft power wielded like a machete through the diligent, decisive act of dressing.” And he added, “They’ve never been JUST clothes.”

The Max Mara coat, which is several years old,  has garnered so much attention, that the Italian label has already announced they will be bringing the style back next year.

It seems fitting that the sartorial newsmaker in the final days of the year should be a coat. Because that’s one hell of a wrap. In June, another politically charged coat was worn by First Lady Melania Trump (pictured above) as she boarded her plane to visit a children’s shelter in Texas where hundreds of migrant children were being held after being separated from their parents at the border as part of a controversial political ploy by President Trump. Scrawled on the back of Melania’s green Zara coat, was a white graffiti style message, “I really don’t care, do you?”

She might as well have ignited an atom bomb because the shockwaves was felt around the globe. One media person went so far as to label her, Marie Antoinette, for her bold show of heartlessness.

Considering it was a humanitarian mission she was embarking on and she is the First Lady – someone whose every public appearance is scrutinized – her coat also prompted much bewilderment.  What did the message mean and who was it intended for? The White House released a  statement, “It’s a jacket. There was no hidden message.”

But it did prompt a response. Some Americans began to scrawl in a similar style across their jackets; “Yes, I care.” The annual MET Gala, which is sponsored by Vogue, is considered a serious fashion event that draws Hollywood biggest stars who bring their A-game to the red carpet. It is such an exclusive affair, you can’t just buy a ticket. You have to be invited by Vogue editrix, Anna Wintour, to buy a ticket. This year’s gala at the Costume Institute at the Metropolitan Museum of Art in New York City was entitled, Heavenly Bodies: Fashion & The Catholic Imagination and featured a guest list which included some of the most fashionable people on the planet, including Rihanna, Madonna, Sarah Jessica Parker and Katy Perry.

So imagine everyone’s surprise when 61 year old, two time Oscar winning actress, Frances McDormand (above) strolled onto the red carpet, dressed in teal Valentino couture and a swirl of leaves around her face. Despite her immense acting talents, McDormand’s fashion sense has always been low key to the point of being nondescript. And here she was at the most fashionable gala of the year, not only looking fabulous but seemingly having the most fun. The 2018 Golden Globes will go down in history as having a red carpet which showcased one of the biggest political statements from Hollywood in a single night. Nearly every attendee wore black (as did Angelina Jolie, above), in solidarity with the Time’s Up initiative, which was launched to fight sexual harassment and provide help for victims in the wake of the #MeToo movement. But this being a Hollywood red carpet and millions around the globe tuning in to watch on television, the attire might have been black but they were designer designers and far from sombre, making it a runway of the most fashion-forward protesters ever seen

2018 had the distinction of adding a royal wedding to its list of must-see events, when Prince Harry tied the knot with American actress, Meghan Markle. Naturally, the royal wedding dress became the most important matrimonial gown of the year. Adding to the intrigue leading up to the big day, style pundits wondered which sartorial route would Markle take, being an American and also a second-time bride. Would she pick an American designer, like Wallis Simpson did, when she married Prince Edward? Her pale blue wedding dress by Mainboucher went down in history as one of the chicest wedding dresses ever.

But Markle kept it classic and simple, opting for a white gown from the House of Givenchy – a French label – which had recently installed a young British designer, Clare Weight Keller, at the helm. But it was her veil, which held more interest, embroidered with flowers from all the countries in the Commonwealth. But the clean sleek look of the gown signalled the arrival of some modernity in the British Royal Family, as Markle is not just a woman of colour but also seemed to indicate she is not afraid to break with tradition.