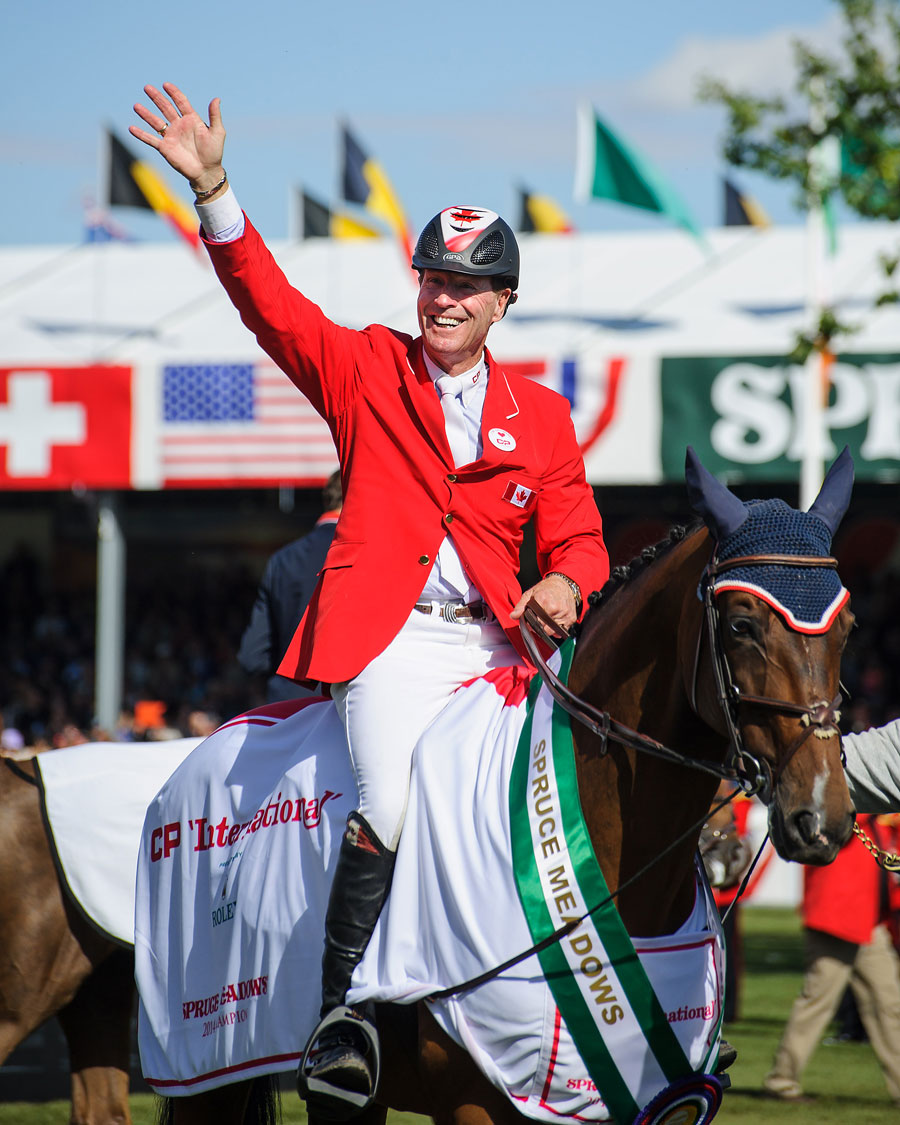 Ten-time Canadian Olympian Ian Millar, 72, has announced his retirement from international show jumping competition after nearly five decades at the top level.  One of the most successful show jumping riders of all time, Millar is stepping away from the international level to re-focus his efforts on coaching and developing young horses.

Born in Halifax, NS, in 1947, Millar began riding at the age of 10 in Alberta and was named to his first Nations’ Cup team in 1971.  Since that time, Millar has been a stalwart on the Canadian Equestrian Team, revered for his ability to deliver under pressure in major competitions.  Millar has represented Canada in more than 200 Nations’ Cup team competitions, including appearances in 10 Olympic Games, 10 Pan American Games, and seven World Championships.  Millar’s 10 Olympic appearances is a world record for any athlete across all sports.  He won his first Olympic medal, a team silver, at the 2008 Beijing Olympics and has 10 Pan American Games medals, including two individual and two team gold.

“Representing Canada many times over my career has been my greatest honour,” said Millar of Perth, ON.  “Each time I wore the red team jacket was very special to me, and the fact that I was able to share this experience with so many great riders is a testament to the quality of horsemen and horsewomen here in our country.”

In addition to his efforts representing Canada internationally, Millar has won over 150 grand prix competitions over the course of his illustrious career, including winning the prestigious international grand prix three times at the Spruce Meadows ‘Masters’ tournament in Calgary, AB.  He is a 12-time Canadian Show Jumping Champion and was the first rider to win back-to-back World Cup Finals, earning the title in 1988 and 1989.  His most successful horse, Big Ben, was a household name throughout Canada in the late 1980s and 1990s and was a favourite to win everywhere he competed.

Millar built his home stable, Millar Brooke Farm, located in Perth, ON, into a powerhouse training ground for international show jumping.  In addition to his development of over 100 grand prix horses, Millar has coached a number of other top international riders including Canadian Olympic teammates Mario Deslauriers and Jill Henselwood, as well as Richard Spooner of the U.S.  He has also been instrumental in the successful careers of his son, Jonathon; daughter, Amy; and daughter-in-law, Kelly, all of whom currently represent their country in international competition.  Today, Millar operates Millar Brooke Farm alongside his children and focuses on producing top show jumping horses and riders for competition.

While Millar is stepping back from international competition, he plans to be busier than ever working with up-and-coming athletes and horses.

“The bond formed between horse and rider is an amazing thing to experience, but the partnership has to be built the right way, with compassion, understanding, and care,” said Millar.  “Over the past few years, I have found myself more and more drawn toward working with young horses and riders, and I am excited to expand my coaching to share my knowledge and passion with the next generation.”