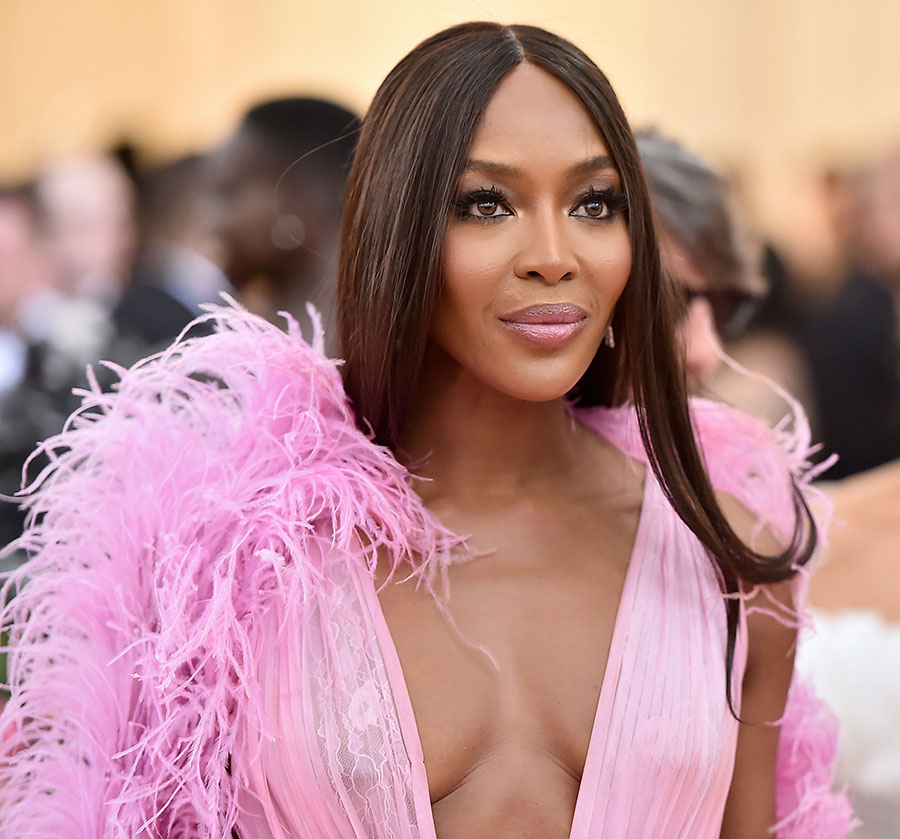 Naomi Campbell made her Met gala debut in 1990 as a guest of Gianni Versace; last year, she wore this pink Valentino Courture gown with a feather cape. PHOTO: Theo Wargo/WireImage

Today marks supermodel Naomi Campbell’s 50th birthday. The trailblazing, controversy-courting, ’90s cat walker-turned-philanthropist has found her voice. One of the fabled “Trinity” alongside Christy Turlington and Linda Evangelista, Campbell faced down prejudice throughout her glamorous career. Her rise paved the way for the new wave of inclusivity and broader representation in the fashion industry. She is also a pop culture surfer who has remained top of mind, emerging as a prescient prepper for this virus-decimated era when she posted a video to social media late last year where she demonstrated how she wipes down her airline seat. It went viral (no pun intended). Since then she has posted pictures of herself in full hazmat gear for all jet setting. She has been spending lockdown in sweats, like the rest of us, but at night, she changes into a caftan, some of them scooped up at Liz Taylor’s auction.

Campbell has many new projects on the go, putting both put her voice and her opinions front and centre. She shot a cover photo of herself from isolation to celebrate her 50th in tandem with the 50th anniversary milestone for Essence magazine, a trailblazing publication for Black women. She stars in a new Amazon Prime reality show, Making the Cut, which searches the globe for the next hot designer, and hosts a juicy interview show on her YouTube channel called No Filter With Naomi, which has featured guests from Marc Jacobs to Anna Wintour and Serena Williams. Campbell’s beauty and knockout body remains as it ever was. She is the standard-bearer of the new wave of members of the 50 club — which now includes Jennifer Lopez, Jennifer Aniston and Uma Thurman — who defy the accepted laws of aging and its customary effects. Indeed, after a 14-year runway hiatus, Campbell took a spin down the Valentino haute couture runway last year, closing out the house’s summer collection in a see-through chiffon gown.

Campbell exploded onto the modelling scene with a back-to-back series of groundbreaking firsts: in 1988, she was the first Black woman to be featured, in turn, on the covers of British, Italian and French Vogue. Then in 1989, Anna Wintour gave her the top prize, fronting the September issue of American Vogue, another first for a Black woman.

Discovered as a South London schoolgirl at 15 by a modelling agent while she was walking around the city’s fashionable Covent Garden, Campbell has been in and around show business her whole life. At four, she appeared in Bob Marley’s video for “This Is Love.” Her mother was a professional dancer, and Campbell followed in her footsteps, attending a stage school.

That balletic poise is one of the things that set Campbell apart on the runway. The camera adores her, of course. But seeing her live on a runway is a hell of an experience; her charisma is like a punch to the gut. I remember sitting in a seat as a fashion reporter in Milan circa 1995 and being knocked backwards, literally, as she tore down the Versace runway. “The Walk” was what everyone called it, and it remains unparalleled: Campbell brings the awe, and attention must be paid. Her fame transcended the fashion pack: Campbell’s epic fall on the Vivienne Westwood runway in 1993 made international headlines.

Her image is ubiquitous, from the heyday of Fashion Television runway coverage and iconic editorial images. However, she did not garner as many large and lucrative ad campaigns as her white colleagues. She was the face of NARS and starred in Ralph Lauren and Versace ads, but this is nowhere near the riches her fellow white “supes” commanded. As she told The Guardian in 1997: “There is prejudice. It is a problem, and I can’t go along any more with brushing it under the carpet. This business is about selling, and blond and blue-eyed girls are what sells.”

In 2013, Campbell joined forces with fellow supermodel Iman and modelling agent Bethann Hardison to launch the Diversity Coalition to bring awareness to inherent racism in the fashion system. Today she is known for mentoring young models such as South Sudanese-Australian sensation Adut Akech, whom she refers to as an honorary daughter.

Campbell’s penchant for feuds (including a 15-year-long doozy with fellow model Tyra Banks) is a thing of the past. Then there were the scandals, many involving cellphones thrown at staff. In 2000, she pleaded guilty to assaulting an assistant with one in Toronto; then she parlayed her 2007 community-service sentence for assaulting her maid with a Blackberry into a paparazzi fashion show, wearing Dolce & Gabbana sequins to pick up garbage in New York. A W Magazine spread followed, as did a spoof version she shot for a Dunkin’ Donuts commercial.

She explored her anger management issues in a memorable interview with Barbara Walters in 2000. “Anger is a manifestation of a deeper issue …” she said, “and that, for me, is based on insecurity, self-esteem and loneliness. I was really unhappy. I realized I was going to lose the people who really loved me if I didn’t find out what was making me do the things I did.”

A flashy love life — she has been romantically linked to men ranging from Robert DeNiro and Leonardo DiCaprio to Formula One’s Flavio Briatore, boxer Mike Tyson, musicians Usher, Adam Clayton and Eric Clapton and a businessman named Vladislav Doronin, with whom she moved to Moscow — and tales of life in the fast lane served to further embellish the bad-girl image. She was also courted (not reciprocally) by Charles Taylor, the deposed warlord and president of Liberia. Campbell was the star witness in a 2010 trial that tried to connect the blood diamonds Taylor had delivered as an offering (after meeting her at a dinner party in South Africa) with funding for crimes against humanity in Sierra Leone.

As she stepped out of the modelling spotlight, Campbell shifted her focus to activism and philanthropy, inspired, she has said, by her granddaughter-like relationship with Nelson Mandela. She founded Fashion for Relief in 2005 and has raised funds for Hurricane Katrina in 2005, the India terrorist attacks in 2009, the Haiti earthquake in 2010 and the Japan earthquake in 2011. She has also been active raising money for breast cancer and has been celebrated for her work combatting poverty in Brazil.

She has also turned the mic on others, and, although she claims to be apolitical, is compelled by people in power. As a correspondent for Russian and German Interview Magazine, Campbell has grilled former Venezuelan president Hugo Chavez and Russia’s Vladimir Putin. Campbell is now part of the editorial team at British Vogue under the leadership of her long-time friend Edward Enniful, who is a vocal advocate for sustainability and diversity in the industry. As a contributing editor, Campbell has taken on a role with heft, interviewing the mayor of London, Sadiq Khan, in 2017 about how Brexit might negatively impact diversity in the country.

The grown-up Naomi has softer edges and, after a spell mentoring models on the British reality contest The Face, joined forces with Heidi Klum to mentor designers on Making the Cut. Campbell explained her nurturing impulse to InStyle: “There are many people out there who are probably going to look at it and say, ‘I could be on the next one,’ and that’s what it’s about. We want those people, worldwide. There are some amazing young, gifted designers out there who just don’t have the platform or are able to get the connections that they need to get out there. This show gives that opportunity.”

Naomi Campbell has filled out at 50, tapping more dimensions of herself. She has risen above the noise and fury of her early fame and jet-set lifestyle and is becoming a new symbol for our times.