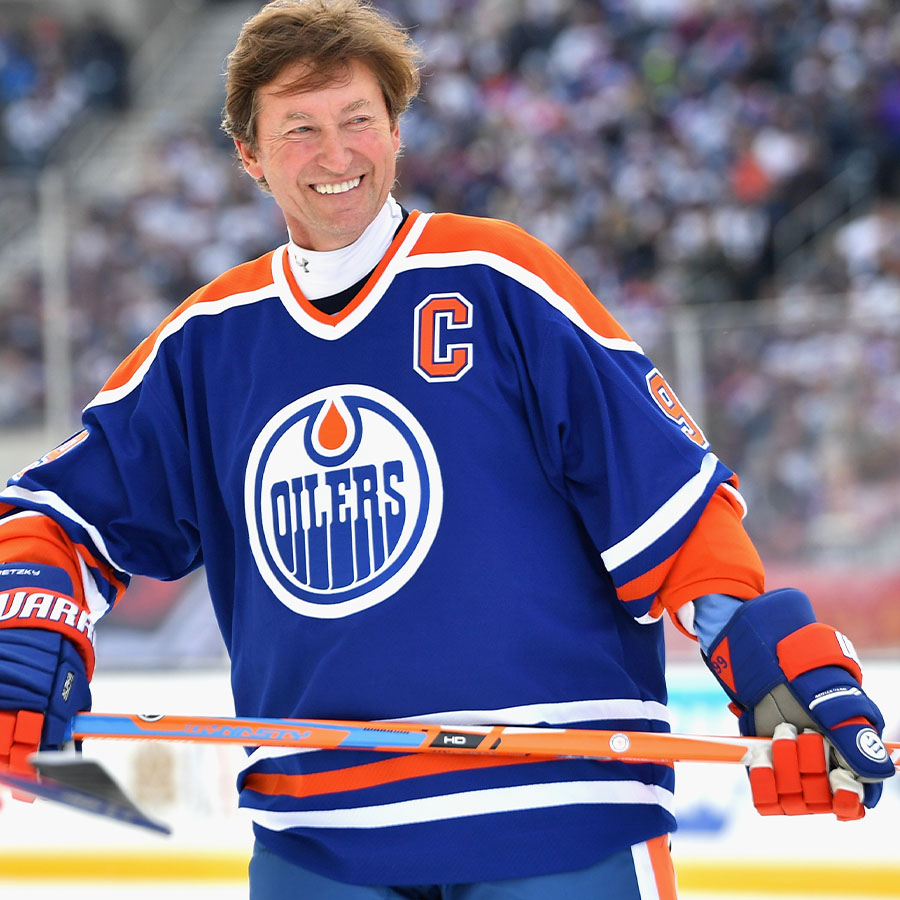 Wayne Gretzky donned his iconic Edmonton Oiler uniform in 2016 while playing an outdoor game with his old teammates against the Winnipeg Jets alumni. Photo: Andy Devlin/NHLI via Getty Images

Wayne Gretzky turns 60 years old today, a milestone that hardly seems possible to those of us who remember the Great One scoring goals and celebrating Stanley Cups as if were only yesterday.

As we wish Gretzky a very happy birthday, we’ve dug up 10 lesser known aspects of his storied life and career to bring you up to date with the sports icon who not only ranks as one of the most famous Canadians ever but remains a genuine all-Canadian good guy.

1. The Great One Gretzky was born on Jan. 26, 1961, in Brantford, Ont. He was given the nickname the Great One by a local reporter who had run out of adjectives to describe the youngster’s scoring exploits. Amazingly, he was only 10 years old when he earned the moniker, but it has stuck with him the rest of his life.

2. Cool Trivia Over the course of his 20-year NHL career, Gretzky scored an astounding 894 goals, his first coming on Oct. 14, 1979, and his last on March 29, 1999, while playing for the New York Rangers. Astound your grandkids with your hockey knowledge by telling them that he scored his first professional goal while playing for the Indianapolis Racers of the World Hockey Association. On Oct. 20, 1978, the 17-year-old budding superstar bulged the twine against the Edmonton Oilers, the team he would eventually win four Stanley Cups with in the NHL.

3. The Big Trade Everyone remembers Aug. 9, 1988, as the year Gretzky was traded from the Oilers to the L.A. Kings, a move that caused so much angst in Canada that NDP house leader Nelson Riis actually requested the federal government block the deal.  But not many people remember that in 1996, he was also traded to the St. Louis Blues, where he played 18 games before signing with his last team, the New York Rangers, in July 21, 1996.

4. The Final Farewell On April 18, 1999, Gretzky played his final game in the NHL with the New York Rangers. Bryan Adams, who sang the O Canada before the game, actually changed the lyrics of the anthem in order to salute his good friend.  Instead of the usual line “We Stand on Guard for Thee,” Adams instead inserted, “We’re going to miss you, Wayne Gretzky.” (No doubt the American audience assumed these were the correct words.) Several nights earlier, Canadian fans had a chance to bid goodbye to their beloved superstar. News of his retirement had broken before Gretzky lined up to play against the Ottawa Senators. And on his final shift, the sellout crowd bid an emotional farewell to the Canadian sports icon with a thundering ovation while chanting: “One more year!”

5. Forever 99 After he played his final game and went directly into the Hockey Hall of Fame, the NHL formally retired the Gretzky’s famous jersey No. 99. Gretzky first started wearing the number while playing junior hockey with the Sault Ste. Marie Greyhounds. He wanted to wear No. 9 – in honour of his favourite player, Gordie Howe – but that wasn’t available. So he chose 99 instead and the rest is history.

6. Unbreakable Record It’s often said that Gretzky was the most dominant athlete of any sport. His offensive numbers – he owns or shares 61 NHL records  – are ridiculous, and no other player before or since has come close to matching them. His favourite record, though, occurred in 1981 when he scored 50 goals in 39 games, a mark that has stood the test of time and which he considers will be “the hardest to break.”

7. Got Him, Got Him, Need Him In January of this year, Gretzky’s 1979 O-Pee-Chee rookie card sold for a shocking US$1.29 million at auction, making it the most expensive hockey card ever sold. (The groans of anguish you hear are from grown men across Canada who, as youngsters, once had that very card in their collection.)

8. Family Guy Gretzky, of course, married Hollywood actress Janet Jones after meeting her on the set of television show Dance Fever, where she was a contestant and he was a judge. The couple were married in July 1988 in a lavish royal-style wedding. Less than a month later, Gretzky was traded to L.A,. and  Edmonton hockey fans have never forgiven Jones for stealing their favourite son. The couple have five children – Emma, Tristan, Trevor, Ty and Paulina. While none of them showed much interest in playing, Trevor was a good enough baseball prospect to be drafted by the Chicago Cubs in the seventh round of the 2011 MLB June Amateur Draft.

9. Enjoying Life Gretzky, who nowadays devotes much of his time to raising money for charity and running his Wayne Gretzky Estates winery in Niagara-on-the-Lake, Ont., is also once again working with the Edmonton Oilers as partner, vice chairman and hockey ambassador. Since his retirement from hockey, he has been on the cover of Zoomer magazine twice. He graced the cover of the magazine’s premier edition cover in October 2008 and appeared again in 2016, this time with his father Walter and son Ty. In the 2008 issue, Zoomer editor-in-chief Suzanne Boyd asked Gretzky to share his thoughts on age. “I don’t concern myself too much with aging. I do keep myself in good shape and I enjoy every day as it comes.”

10. “You miss 100 per cent of the shots you never take” Gretzky did most of his talking on the ice and, in order to deflect the spotlight or avoid controversy, he carefully guarded everything he said off of it. He did leave us with this one famous quote though, which still crops up everywhere – quoted by politicians, celebrities, self-help authors and frequently on internet memes. He first said the famous line during a January 1983 Hockey News interview in which he was responding to a reporter asking him why he was taking so many more shots that year.