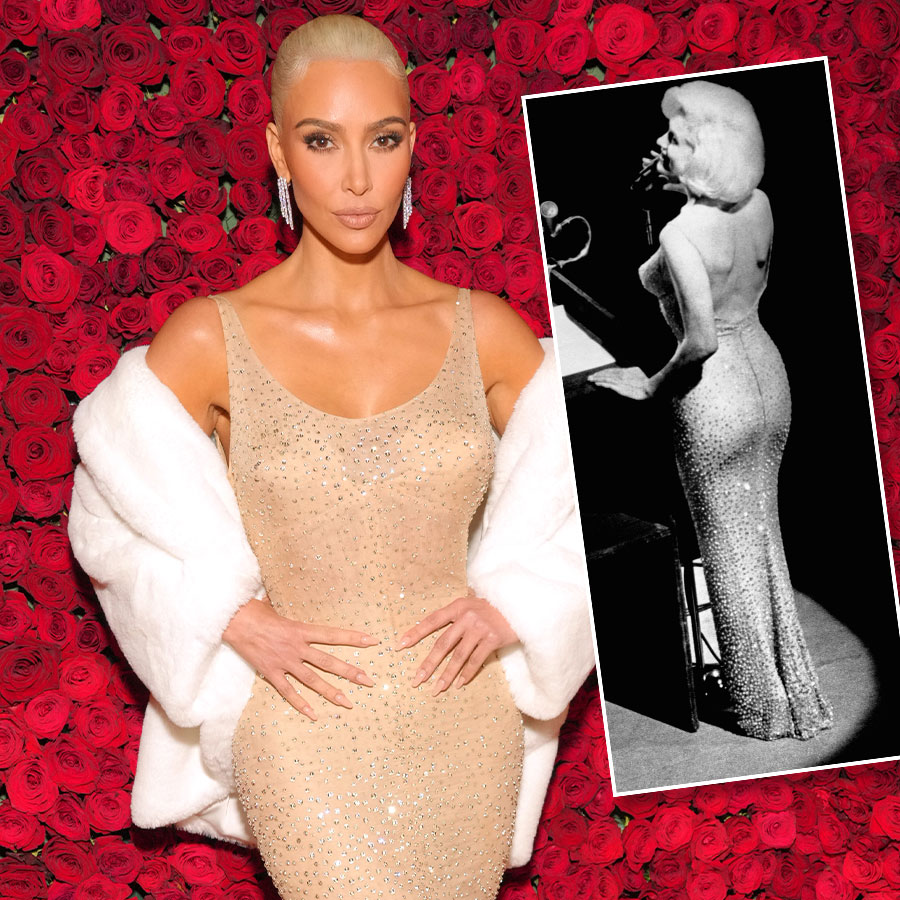 Having made the cover of American Vogue three times in the last eight years to declining levels of horror, Kim Kardashian’s unexpected fashion elevation saw her entire clan bust through the balustrades of the once ultra-exclusive Met Ball in 2022, co-chaired by Vogue editor-in-chief Anna Wintour. The reality star makes a big splash walking the red carpet in the dress that Marilyn Monroe wore to coo “Happy Birthday” to her alleged lover, then-American president John F. Kennedy, at a 1962 Democratic Party fundraising gala at Madison Square Garden. So form fitting that Monroe had to be sewn into it,  Kardashian dropped 16 pounds in three weeks to pour herself into the gown. Though how one loses weight off a signature, much-speculated-on Kardashian caboose is anyone’s guess. Still, the Skim’s billionaire couldn’t quite do it up, which she concealed with an off-shoulder fur stole.

Embellished with 6,000 crystals, the original “naked dress,” also known as the “’Happy Birthday’ dress”, remained part of Monroe’s estate until 1999 when it was auctioned at Christie’s for US$1.5 million to Bob Schagrin, owner of Gotta Have It Collectibles in Manhattan. Seven years later, it would fetch US$4.8 million from its current owner, the Ripley’s Believe It or Not Museum in Florida  both establishments offering a sadly ignoble perch for such a mythic and historic gown.

The infamously slinky mesh and marquisette dress was among the very first creations by Bob Mackie — working for Jean Louis at the time — who would go on to become a fashion legend in his own right. A Council of Fashion Designers of America Lifetime Achievement Award winner hailed by Vogue as a “genius”, his career spanned working with the fabled Hollywood wardrobe doyenne Edith Head to earning mass renown as Cher’s favourite fashion collaborator from the late ‘60s on.

“An iconic piece of American history should not be put at risk for an ego-boost and photo-op,” Justine De Young of the Fashion Institute of Technology told People magazine. Adding that Kardashian “can — and did — commission a replica, which would be indistinguishable from the original.”

True, Kardashian had a copy made, which she changed into immediately after her pap walk into the event. Even so, DeYoung derided the body image madness that Kardashian was broadcasting. “Crash-dieting to fit into the original dress is an unfortunate message to send, one more in keeping with ideals of the 1960s than today.”

Meanwhile, Meghan McCain — too obnoxious for The View and having found her soapbox at Britain’s Daily Mail tabloid — decried the culture’s Kardashian “saturation” while noting that Kim had morphed herself into a modern-day Liz Taylor, a celebrity known “for her beauty, fashion, diamonds, marriages and messy personal life.”

While the magnificent Taylor — receipt of two Academy Awards and five nominations — might take issue with that assessment, Kardashian as this era’s sex symbol is an inarguable conclusion. One mirrored by the fact that Kardashian’s career, and that of the icon she was channelling at the Met Ball, both took off with a sex scandal: Kim’s homemade sex tape — still a topic of the news — contrasted by Marilyn’s pin-up centerfold in the first issue of Playboy. Culture always reflected by its entertainment personalities, it does make one long for the more elegant yesterdays. Monroe romancing a suave JFK, to a Kardashian on the arm of a tattooed Pete Davidson, seems an allegory for society’s vertiginous slide. On the other hand, Kardashian has long professed her admiration for Taylor from who she took cues, so perhaps there’s hope.

“You are my idol but I’m six husbands and some big jewels behind. What should I do?” asked Kardashian, interviewing Taylor for a 2011 Bazaar interview, just a month before the screen legend’s death.

“Follow your passion, follow your heart, and the things you need will come,” replied La Liz, before recommending “the easy glamour of wearing jewelry all the time.” Excellent advice that also explains Taylor wearing her Cartier ruby and diamond parure to the pool.

Of course, Kardashian may have taken Taylor’s advice a little too literally — she reportedly spent just under US$65,000 on pieces of the screen legend’s jewelry at auction in December 2011. All of which tracks with Kardashian’s professed obsession with auctions, not to mention her love of collecting vintage Hollywood memorabilia. Boasting of her auction gets as if casually running down purchases after returning home from the store, she at various times acquired Elvis Presley’s rings as a gift for her brother Rob, the hat Michael Jackson wore in his “Smooth Criminal” video for her daughter North, and the custom-made shirt and pants Janet Jackson wore in her music video for her the song “If.”

“You can have anything you want in life, if you dress for it”  —Edith Head