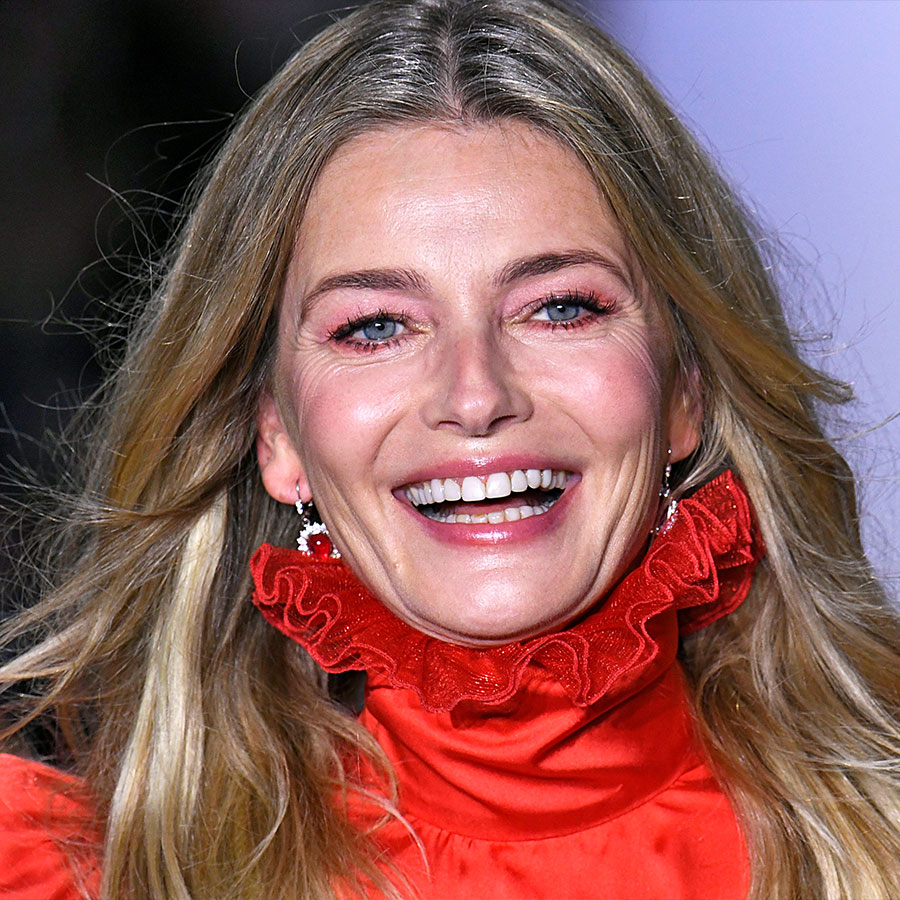 Paulina Porizkova — seen here in 2019 at New York Fashion Week — recently turned a nasty twitter comment calling her "old and ugly" into a positive movement, using the insult as a hashtag to celebrate the beauty of older women. Photo: Victor Virgile/Gamma-Rapho via Getty Images

Further proof that age is just a number, model Paulina Porizkova, 57, launched a tongue-in-cheek Twitter campaign — #oldandugly — that has women proudly posting selfies that prove just the opposite, all while a slew of over-50 celebrities are pegged to represent major brands and grace magazine covers.

“I can say, ‘this is my age, this is where I am today’. It looks different than it did, you know, when everything was all up higher,” Brooke Shields, 56, mused to NPR of her Spring 2022 Jordache campaign, for which she posed topless.

“It’s probably the first time I’ve ever felt the sex appeal. You can’t really feel it at 15. When I did [the Calvin Klein ads in 1980], I didn’t own the sexuality of it in the same way I do now. So, now I’m much more inclined to do something more overtly sexual. It’s mine, you know?”

That the fresh teenage face of 1980s Calvin Klein would become the 50-plus spokesmodel for a sexy denim campaign today offers a tidy timeline of how far we’ve come in our perspective on women, age, and attractiveness. Having signed with Jordache, Shields has also been tapped by Clos du Bois for the California winemaker’s age-appreciative Spring 2022 media blitz that also includes Courteney Cox, 57.

Looking to boost Chardonnay sales, a wine that had its fashionable heyday in the 1980s and was now considered dated, Clos du Bois hired Ogilvy for a rebrand. Rejecting the typical approach — energizing an outmoded product by infusing it with youthful spirit — the renowned advertising agency proposed the opposite tack: embracing Chardonnay’s more mature, core constituency.

Instead of reinvigorating the wine by skewing its demo downward, the spring campaign celebrates what “older” actually looks like these days. The new Clos du Bois Long Live campaign was introduced with a spunky video focused on long-time Chardonnay lovers in their 50s, 60s and beyond, challenging ageist assumptions in a spree of fabulous outfits, cool dance moves, and roller skates. And don’t forget the jaunty tagline: “Chardonnay for people who know what it’s like to live a little.”

“I loved the concept. No matter what age, you can still be young at heart,” said actress Courteney Cox, who directed the clip. “It feels fresh, energetic and fun and I think we succeeded in bringing the spirit of the campaign to life.”

It feels smart as well. A March 2022 survey by Clos du Bois found that only 37 percent of people 55 and older thought their age group was “authentically represented within alcohol advertising”. Why try to convince a younger market that prefers leaner, less oaked varietals like Sauvignons to embrace a big, buttery Chardonnay when you can more easily become the choice brand of a monied market that’s already there?

“I was amazed at how little representation there is between the ages 40 and 60, and even past 60. Clos du Bois approached me to flip that script,” Shields explained to EOnline. “Women my age are embarking on the most exciting chapters of their lives. They’ve had children, had careers … this is a very vital demographic. An age group that can support themselves and just wants good things in their life. To enjoy their lives in a bigger way. This is a very positive thing, an earned place to be. This maturity and vitality only comes from experience.”

Paulina Porizkova, the 90s supermodel turned 21st century age-positive beauty advocate, certainly thinks so. Clapping back at a nasty Instagram comment she’d received for posting a poolside bikini pic on April 29th — “You must be in so much pain to keep posting bikini pictures at your age. I’ve always thought that getting old and ugly is hardest on the pretty people” — the 57-year-old retorted with #OldAndUgly, a hashtag that quickly went viral.

Older women all over the world posted sassy selfies on Twitter and Instagram as Porizkova continued sticking her thumb in the eye of stuffy notions about age and sex appeal with racy images and insouciant commentary. Porizkova’s new status as a straight shooter will be reflected in No Filter, her forthcoming book of essays about “the complexities of womanhood.” And she’s also the face of the new “Icon” campaign from fashion brand Karen Millen, which boasts a focus, “on the ageless female form, with Paulina its champion” while touting Porizkova as someone who, “achieves the rare trifecta of confidence, sensuality and everlasting effortless style.”

But enough with that spring chicken. A 76-year-old Helen Mirren was the May cover girl for People’s Most Beautiful issue, her wry smile hovering above a headline that shouts, “Don’t Call it Beauty, Call it Swagger.”

Meanwhile, supermodels Beverly Johnson, 69, and Kelly Emberg, 62, posed in matching Halton dresses for the cover of GenLux’s recent “Age Is Just a Number Issue;” a topless Lauren Hutton, 78, is the cover star of the May “Beauty Issue” of Harper’s Bazaar and 93-year-old Japanese concept artist Yayoi Kusama is Nicolas Ghesquiere’s collaborator and creative muse for Louis Vuitton’s 2023 Cruise line.

And, of course, in a category all her own, Iris Apfel — who signed a modelling contract at 97 and refers to herself as a “geriatric starlet” — is celebrating her 100th year with a maximalist Spring 2022 collection for H&M, which is best summed up by her own motto: “More is more and less is a bore.”

“I don’t think much about age, it just happens,” Apfel told Good Morning America on becoming a century-old fashion icon, offering a few tips on life and style. “A sense of humour is absolutely necessary. Be an individual. Spend a little time getting out of the box.”

Hair Without a Care: Why Women Over 50 Are Embracing Locks of All Colours