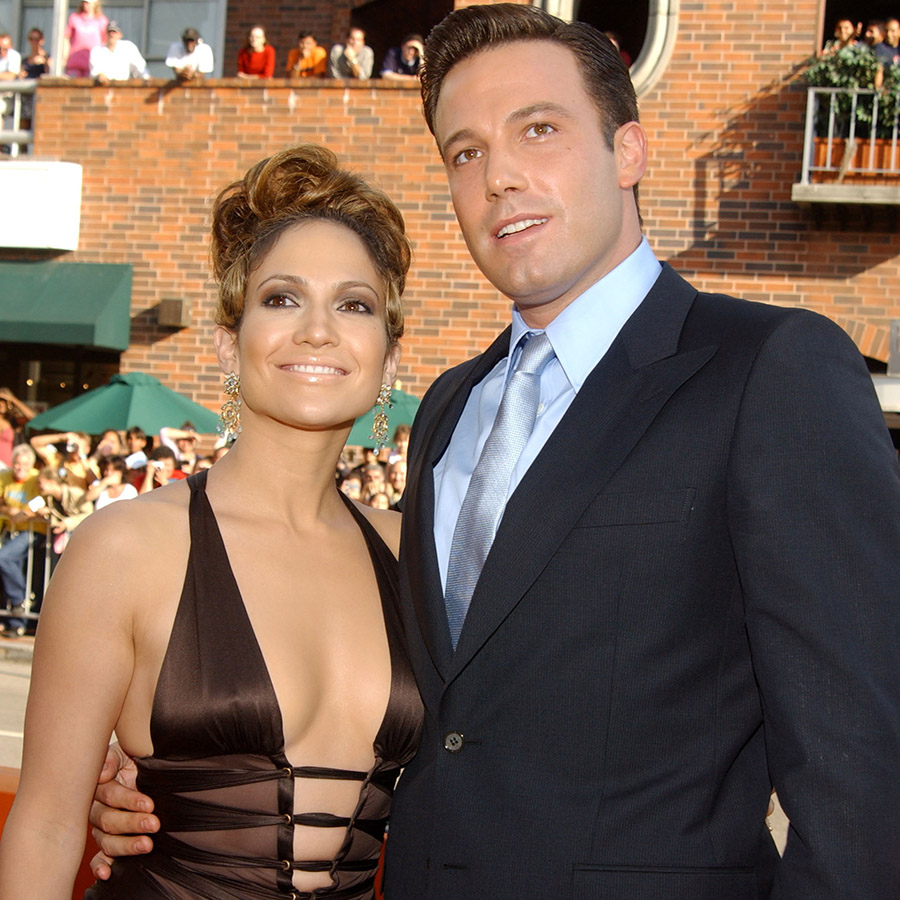 Jennifer Lopez and Ben Affleck at the 'Gigli' Los Angeles Premiere in 2003. The pair broke up the following year, but recently rekindled their romance. Photo: Amy Graves / Contributor via Getty Images

The nuptials come almost 20 years after the couple broke off their high-profile engagement in 2004.

‘Bennifer’ originally called it quits after roughly two years of dating (they first met in 2001 while working as on-screen romantic partners filming Gigli) and Lopez later admitted to Maria Shriver that, “It was probably my first big heartbreak.”

With the couple reportedly planning to make it doubly official with another ceremony for family and friends at Affleck’s home in Riceboro, Ga., we were inspired to take a look at other couples who’ve given a past love another try — with varying degrees of success.

The emerald-cut standard of glamorous and tempestuous love matches — and re-matches. The Hollywood icon and Welsh thespian famously met when they starred as adversarial lovers filming the epic 1963 film Cleopatra in Rome; at the time, both were married to other people. With paparazzi in hot pursuit of their scandalous affair, in 1964 Burton proposed at Toronto’s King Edward hotel and they tied the knot in Montreal. In his must-read private diaries, published in 2012, Burton chronicles their intense lust and alcohol-fuelled rows and how both took their toll the first time around in spite of abiding love (and many movies together). They divorced in 1974 and remarried in 1975, but only diamonds are forever: they divorced again less than a year later.

Dionne Warwick married actor and jazz musician William Elliott — twice. The first time they were married in 1966 but divorced the following year before remarrying just a few months later. “I married him and wanted a divorce and married again. Can’t live, can’t live without,” Warwick once explained. The couple had two sons and were together until 1975. Being the main earner is what ultimately put a strain on the marriage, Warwick told the Guardian. “That is very difficult for the male ego.”

“Every so often you meet a magic person, and every so often, you meet someone from your tribe,” Fisher wrote in her 2008 memoir Wishful Drinking; “which is how I felt when I met Paul Simon.” The actress and bestselling author first dated the folk singer-songwriter before she was famous, in 1977, as she was filming the first Star Wars movie. During that time she was briefly engaged to Dan Aykroyd (who was on SNL at the time). “She had long conversations on the phone in my presence with Paul Simon, with whom she was attempting to reconcile at the time of my relationship with her,” Aykroyd recalled in an interview with People. In all, Simon and Fisher romanced for a dozen years — including being married in 1983 for just under a year, and dating again following their divorce. His song “Hearts and Bones” is about their relationship.

As shooting continues on Aaron Sorkin’s biopic series Being the Ricardos starring Nicole Kidman and Javier Bardem as Lucille Ball and Desi Arnaz, it’s worth remembering that the pioneering sitcom couple once split before they made TV history. In 1944, spurred by Arnaz’s infidelity and drinking, Ball obtained an interlocutory decree. The couple reconciled before the waiting period was final, but eventually divorced for good in 1960. They, however, remained close friends.

Wood began her career as a child star and grew up before our eyes in Rebel Without a Cause and West Side Story. After dating Elvis and Tab Hunter she stepped out with “R.J.,” as the 91-year-old Wagner is known, when she turned 18 in 1956 (Wagner was 26), and they wed a year later. Divorce came in 1962, after which she dated Warren Beatty and married Richard Gregson. When they, too, divorced, she got in touch with Wagner. They remarried and were together almost a decade until her tragic and mysterious 1981 death by drowning off their yacht Splendour in Catalina.

The Canadian Baywatch star wed her longtime friend, and American poker player, Salomon in 2007 and again in 2014; one marriage was annulled and other lasted only a few months. He still carries a torch, apparently (one endorsed by her adult sons). Hope springs eternal.

The Mormon singer first married pro basketball player Craig in 1982, but they divorced in 1985 after having one child. Nearly 30 years later it was reportedly Craig who helped her cope after the suicide of her son Michael (one of Osmond’s eight children with her second husband). Osmond and Craig remarried in 2011 but only after keeping their rekindled relationship a secret from everyone for two years. Even her children didn’t know. “I didn’t want anybody to get hurt, you know if it didn’t work out. And gosh, it just worked out,” she told Good Morning America.

Although the blond-maned breakout star of Charlie’s Angels and the Love Story star had a son together in 1985, their turbulent 18-year relationship ended in 1997 after she discovered him having an affair. They re-united in 2001 when Fawcett was diagnosed with cancer and remained together until her death (which they chronicled in a raw documentary, Farrah’s Story) in 2009.

When teenage Frida Kahlo met Diego Rivera — 20 years her senior — he was already an established artist. They married in 1929 — Kahlo aged 22 and Rivera aged 42 — and her parents dubbed them ‘the elephant and the dove.’ They divorced in 1939, only to reconcile the following year, and the tumultuous relationship of these important Mexican artists is captured in the many artworks they painted of each other during that time. The couple remained together until her death in 1952.

The actors have been married for 24 years but, prior to that, they dated off and on for 15 years; Macy proposed several times but it wasn’t until after they’d been broken up a few years that he asked again and Huffman accepted. “I was so scared of marriage that I thought I would’ve preferred to step in front of a bus,” Huffman admitted in one interview. They first met in the early 1980s at New York’s Atlantic Theatre Company, “and that’s really at the core of our relationship,” Macy once added.  The Desperate Housewives star recently served a 14-day prison sentence after pleading guilty in the college admissions scandal.

After meeting at Hollywood’s famed Mocambo nightclub in 1942, the film noir siren and the restauranteur married twice in rapid succession — mainly because the first marriage wasn’t legal. Crane was still married to his first wife at the time. Neither nuptials lasted.

The renowned crooner (and beloved aunt to George Clooney) and the Academy Award-winning Puerto Rican movie star wed twice, first after eloping in the early 1950s and again in the 1960s before calling it quits. “There was intense love, but living together was too hard,” son Gabriel, one of their five children, later recalled. “My mother always said my father was a great father and a so-so husband.”

The Duke and Duchess of Cambridge

Kate Middleton and Prince William met while attending the University of St. Andrews in Scotland and they are rumoured to have been an item before 2004; he later reportedly broke up with her by phone in 2007 (according to the royal biography Battle of Brothers). But as the world knows, they reunited soon after, got engaged in 2010, and have now been married a decade.

A version of this story was originally published on June, 3 2021.