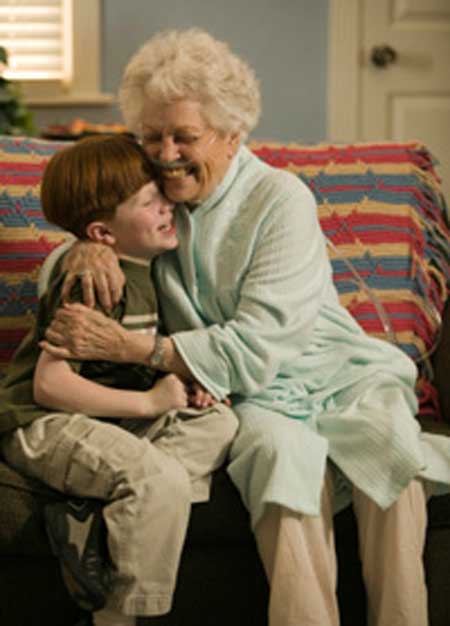 My grandchildren have known from a very early age that I’m a softie and they learned quickly they could use me to negotiate with their parents when they weren’t having any luck in getting their own way. Last week, I heard my 12-year-old grandson tell his dad his arm was really sore from playing sports in gym class and as a result, he didn’t think he should go to his taekwondo class. My son-in-law heard him out but stuck to his guns about the taekwondo class attendance.

A few minutes later, Hudson cornered me in the kitchen and asked me to “please speak to my dad about my sore arm.” My soft old heart melted, of course, but I told him his arm probably wouldn’t really be sore until the next day and besides, I was going to the class with him and was looking forward to it.

I breathed a sigh of relief that I had escaped the job of mediator. It’s never a popular role especially if the parents view grandparents as troublemakers who aren’t on their side when it comes to respecting the rules the parents have set.

As grandparents, we can be as frustrated as the parents when it comes to sticking to the rules about bedtime, mealtime, homework and television watching. Sometimes, instead of nagging or losing our temper, it’s just easier to give in. But a better solution is to let the child learn to negotiate. While we don’t have time to negotiate through every potential conflict and certainly should not negotiate issues around safety or health, sometimes hearing a child’s point of view serves as a valuable life lesson.

According to Scott Brown, author of How to Negotiate with Kids Even When You Think You Shouldn’t, negotiating with children can be a great learning experience in teaching them to deal with conflict constructively and to work with others.

After all, diplomats negotiate, we learn as adults to negotiate at work, with our friends, with our spouses and in sports activities. Life’s negotiations teach fairness, empathy and understanding of another’s point of view.

Children who are allowed to negotiate gain independence and self esteem. When compromise and negotiation are part of a family’s set of values, children learn their opinions and needs are respected and are more likely to respect the opinions of others. Negotiating with children takes a few skills and a particular attitude to be successful.

First of all, think of it as an agreement, not an argument. It’s important as the adult to keep emotions out of the discussion. We’ve all experienced the whining when we tell grandkids it’s time for bed. Instead of resorting to anger and frustration, make sure you feel calm and then engage in a two-way discussion that involves the child’s opinion. Asking a question such as “how many minutes do you think you need to finish this T.V. program and get your teeth brushed for bed?” gives a child a sense of independence and teaches her to reason.

Often we just state the rules without explaining our point of view. Explaining to a grandchild that we have to eat dinner at a certain time because Grandpa has health issues requiring regular mealtimes will help the child understand someone else’s needs and feel empathy. Plus, the child has been included in the process.

Negotiating doesn’t mean giving in and it’s not about winning or losing. Treat it as a two-way discussion and use questions to engage a child in rational thinking and decision making, even if the final decision isn’t his.
For minor negotiations, it’s okay to let the child have her way once in awhile. Changing your mind doesn’t mean you’ve lost. It just means you’ve listened to her point of view and you’ve had an agreement, not an argument. She’ll feel you respect her opinion and needs.

Remain open to suggestions and a two-way discussion, but remember that grandma has the final say. The good news is the child has been heard and understands that someone has to make a final decision. They may not love the decision, but they will have a sense that it’s fair.

Who knows? Your grandchild could be a renowned Canadian ambassador when she grows up.