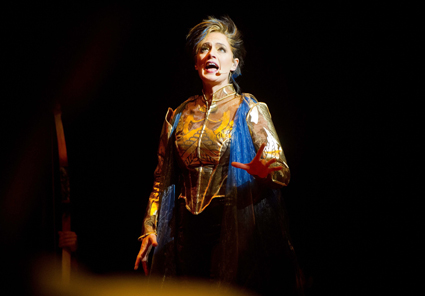 It’s never too late to run away with the circus – Cirque du Soleil, that is.

They fly through the air with only aerial straps. They spin on unicycles like figure skaters without the ice. They cross tight wire en pointe. They perform the uneven bars, en masse and in sync. Then there’s a remarkable balancing feat that holds the audience in rapt anticipation while the band adds suspenseful accompaniment. And all this is just from the women of Cirque du Soleil Amaluna.

For the first time in the company’s 28-year history, they make up the majority of the cast, and leading the troupe is 52-year-old Julie McInnes. She plays Prospera, the female counterpart to Shakespeare’s Prospero, in a production inspired by The Tempest unlike any I’ve seen before and, about seeing this for herself, McInnes responded emphatically, “Absolutely not.”

A multi-talented Aussie and 14-year Cirque veteran, McInnes is engaging in person, enjoyably retaining much of her on-stage drama.  Her current role brought her from the band pit of Vegas shows, O and Ka, to the main stage in Amaluna but not without contemplation.

“I thought all the kids are just going to want to go clubbing and how will I come home to myself and get enough of that, which I value. I thought about it hard. You know anybody that’s my age and is willing to uproot themselves – it’s not for everyone that’s for sure,” she declared.

McInnes describes herself as “fairly restless” and avows that touring with Cirque’s new Big Top show, discovering new places along the way, feeds that but also affords her the chance to plan for her future.

“I’ll have a much better idea of where I want to settle after doing this tour,” she reflected. “Because I’ve obviously made a choice to come a long way from my country a long time ago and, after a certain amount of time, I didn’t really feel like it could be home anymore. And that gets a little frightening when you’re hitting 50 – you kind of have to know where you are.”

However, fear is not the emotion McInnes conveys, especially while playing cello (just one of many instruments she’s mastered) suspended high above the crowd at one point of the show, perched on what looks like the skeleton of a crescent moon.

“Well, when you asked about my favourite moment – I had a wish many years ago, I started to work on an a piece of apparatus that was going to help me fly with the cello. The amount of effort that was put into this lovely wish to see me fly in the air – and I ended up going a lot higher than I thought we were going to because I had to get out of the way of the aerial structure,” she explained. “So I ended up rocking around up there at about 60 feet, but that is an exhilarating moment. It’s a great ride. I said to them you should probably put this out as a sideshow extra and get money for it and people would have a riot.”

Like everyone else, even circus performers, McInnes has to plan for the future and retirement.

“I do think about it but I don’t put a timeline on it. I think financially I’m doing all the right things – doing what I can – I can imagine myself working in smaller theatre groups, small physical performances or film and I’ve got quite a collection of great creative people all around the world. And so, if I don’t worry about it and keep going the way I have, I trust that I’ll be Ok. I don’t think I could keep doing this in my 60s; I’d be a total wreck,” she says with a laugh.

The performer says she’s made an effort to stop and live in the moment over the past few years and has come into her own.

“I arrived in my 50s and sort of knew that this is the prime of my life and I felt really good about it. All the useless worries and stuff is falling away. And, you have to realize that you’ve been building on the things you’re passionate about the whole time.”

It’s evident as she speaks about her fellow performers, the creative directors, even the tent itself that McInnes enjoys the entire experience and even alludes to finding love on tour, a part of her “adventure.” The show is described as “an island governed by goddesses,” and that suits her too.

“I’m really glad I’m in this show that is, at its roots, a celebration of the strength of women. And that strength is shown in so many ways: the compassion, the absolute physical strength, imagination – you know there’s a great balance there, and energy too. It’s kind of remarkable to be (a part of it).”

For more information on Cirque du Soleil and for the full list of tours, including Edmonton in 2013, go to www.cirquedusoleil.com/en/shows/amaluna.