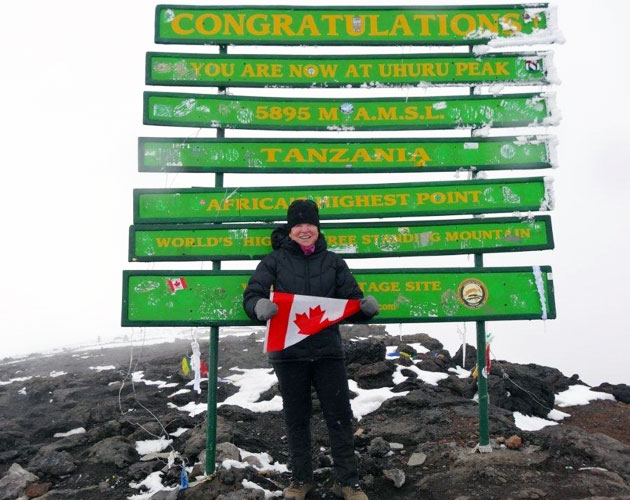 Donna Hamill, 69, wanted to raise funds and awareness for organ donation in Canada. The only obstacle between her and her goal: one of the tallest mountains in the world.

Tucked away in a tent on the side of Mount Kilimanjaro – the world’s tallest freestanding mountain – 69-year-old Donna Hamill admits she considered quitting her climb. It was hard enough staying mentally focused in the days leading up to the attempt. “I started to think, ‘What have I done?’” she remembers. During the ascent, a seven-day journey more than 19,000 feet above sea level, the “day-to-day gruelling hiking” and increasingly thinning air brought Hamill’s doubt to a head.

“There were two times that I can recall vividly when I wanted to quit,” she says. “So many people back (home) had been so supportive I just thought, ‘I can’t come all this way and not do it.’ That was the thought I really hung on to.”

Kilimanjaro was the farthest thing from Donna Hamill’s mind in 1995, the year her critically ill husband, Andy, received the liver transplant that saved his life at Toronto General Hospital. Along with affording the couple more than a decade of life together following the procedure, it also opened Hamill’s eyes to the dire need for organ donation.

Andy passed in 2008, and shortly thereafter Hamill – a retired Toronto-area high school guidance counsellor and physical education teacher – had an idea. She’d kept active and enjoyed the occasional hike and even considered making an attempt at climbing a mountain. “And then I thought, ‘Why not try to raise some money [for Toronto General] through this?’ So the two kind of got paired together.”

Fuelled by her gratitude for Toronto General’s Organ Transplant Unit, Hamill arranged to scale Mount Kilimanjaro with U.S.-based Tusker Tours in October 2012. For eight months leading up to the climb, she upped her regular workout routine, focusing on cardio, leg strengthening, squats, exercise bikes and hiking. Meanwhile, the pledges started rolling in. “People were extremely supportive,” Hamill recalls, noting the outpouring of encouragement allowed her to quell her self-doubt as the climb date grew closer.

“There (was) no backing out, so it was only going forward and doing your best,” she says. “If you have the attitude that you’re going to push through, then that’s what it takes because there’s really not much left in the tank at the end.”

And that was just the training. She still, very literally, had a mountain to climb.

Hamill and her six fellow climbers – none of whom she knew – were joined by three guides and 32 porters who carried the food, utensils, tents, a portable toilet and other equipment up the mountain. The team took the Lemosho route –the longest of multiple routes up – which meant seven days of hiking toward the peak and two days back down.

“It’s just a very tough mountain hike,” Hamill says, “through about five different geographical regions,” including conditions that resemble anything from an African plain to rain forests to a peak crowned with glaciers and snow.

Hamill recalls either rain or snow almost every day, necessitating protective gear that only made the climb more difficult. By nightfall, the group was soaked from exertion and, as there was no way to dry their gear, they had to sleep in their clothes for the next day. Curled up in sleeping bags, the discomfort and evening chill ensured rest didn’t come easy.

It was here, on the mountain, her body aching and the elements constantly chipping away at her resolve, where Hamill suffered her greatest doubt. Twice she wanted to tell the head guide that she was done – that Kilimanjaro had won. She certainly wouldn’t have been the mountain’s first victim. Still, Kilimanjaro, and perhaps even Hamill, didn’t count on a little help from her friends.

“It’s funny because the people you go with, they become, instantly, your family after a day or two,” Hamill remembers. “We’d just say to each other, ‘No, we’re in this together. We’re all getting up there.’ One guy in particular (told me), ‘Just one foot in front of the other.’”

Ultimately, it came down to intestinal fortitude: “You kind of go through a wall and you come through on the other side … and if you can just get through the hard part – the being tired part – and get your breath, then you’re good to go.”

And she did go, all the way to the summit where she experienced “the ecstasy.”

“It’s unforgettable, it’s unbelievable. You’ve been thinking about this for a year and you know what the sign looks like at the top and it’s just taken so much effort to get there,” Hamill remembers. “And everybody’s so happy. The guides are happy for you.”

Fatigue, however, caught up to Hamill on the way down. When she reached the base of the mountain – the conclusion of her nine-day journey – she was so tired, it took her about a month to recuperate fully.

One thing that helped get the spring back in her step was the amount of money her climb raised. Hamill’s original goal was $25,000. Her final tally: $110,000.

“I was absolutely shocked,” she says about her fundraising success. The money allowed Toronto General Hospital to purchase a Fibroscan machine which, by measuring liver functions in potential transplant recipients, eliminates the need for unpleasant and possibly risky surgical biopsies. “Plus,” Hamill adds, “it’s very educational. They can see things through this Fibroscan that are going on in the liver to help them do diagnosis.”

As for possible future fundraising mountain climbs, Hamill, who turns 70 in June, says she’s packed up her tent for good. “I jut feel content with what I’ve done. It’s just a tremendous amount of energy that it takes, and I’m not so sure I want to put myself through that again.”

Instead, she wants to keep the message of the importance of organ donation alive, especially among seniors who think that they’re too old to donate. She notes the rate of registration in Ontario and the GTA is “abysmal – one of the lowest rates of any jurisdiction that we know about.” Statistics from last year suggest that while the number of donors in Ontario increased, “the proportion of Ontario residents who have registered to be a donor have remained steady at 22 per cent.”

“Our goal is to create a culture of donation in Ontario, to make sure everyone in this province knows how to register consent and why it is so important,” the Trillium Gift of Life Network’s president Ronnie Gavsie, told the Western Gazette. “There is one thing in control of every Ontario resident – to register at beadonor.ca and to make sure their families know of their intent.”

Hamill agrees, noting that aside from organs like livers, kidneys, hearts and lungs, donors are also needed for parts such as corneas and other tissues. And the need is dire. According to the Canadian Society of Transplantation, “More than 4,000 Canadians are waiting for an organ transplant to save their lives. Last year, only 1,803 transplants were performed.”

“The message has got to get out there somehow,” Hamill says. “It’s something that people should really think hard about doing.” And when it comes to the boomer demo, “There’s lots of room for people in their 50s, 60s, 70s, and 80s to [donate].”

For those interested in becoming an organ donor, go to www.beadonor.ca. To donate money to Toronto General Hospital, go to www.tgwhf.ca/sites/kiliclimb