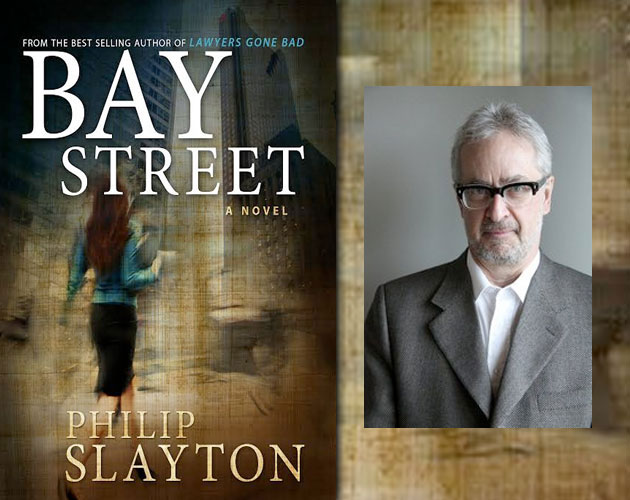 “Writing a novel,” says Philip Slayton, “is something I always wanted to try my hand at.”

So, finally, he did.

Bay Street, a lighthearted mystery set in the cat-and-mouse world of corporate law, was published this month.

“Just because you’re aging doesn’t mean you can’t be excited and intrigued by new experiences,” he says. “I wanted to see if I could do it.”

He explains, “I wasn’t afraid of failing. I was afraid of being mediocre. Any fool can write a book. Many of them have.”

Slayton’s book is many things but mediocre it is not. It’s a delicious, easy read with intriguing characters and a plot that keeps you hooked. (The paperback and Kindle edition are available at amazon.ca and the Kobo edition at indigo.ca.)

The author describes it as “a book you can read while you’re flying to Vancouver and finish when the plane is landing.”

The added value is the rare insider expose of how lawyers behave when nobody’s looking, how they bill clients and how the office politics play out among the partners.

And if Slayton didn’t get around to writing his novel until he was getting old, well, he was busy with other things. And still is.

Currently president of PEN Canada — the association of writers that protects and promotes freedom of expression — he’s published non-fiction books including the bestselling Lawyers Gone Bad.

He’s been a partner in a high-profile corporate law firm on Bay Street, dean of law at the University of Western Ontario and a Rhodes Scholar.

He also started taking piano lessons three years ago because learning to play the piano was something he always wanted to do. He even takes the exams and is practicing to pass Grade 4, despite the fact that the waiting room for the exam is filled with a bunch of nervous 8-year olds and their parents.

But writing a decent piece of long form fiction was always simmering on the back burner.

Approaching 70, he decided it was time to turn up the heat.

It took him about 18 months of hitting the keyboard, with interruptions.

“I am disciplined,” he says. “I work every day. You can only succeed at stuff like this, even modestly, if you think of it as a job. You brush your teeth and get at it, even if you don’t feel like it.”

He approached the novel as a fictional counterpart to his provocative book about bad lawyers. His starting point, he explains, was the main character, a junior partner with the felicitous and unforgettable name of Piper Fantouche.

Where did that come from?

From another author, actually, a very famous one.

He explains, “I went to a dinner party several years ago and present there was Alexander McCall Smith. We were talking about language and he said his favourite word was “fantouche.”

Slayton says the prolific Scottish author was also talking about how he writes four novels a year — one every three months — and how this has made him extraordinarily rich. “I heard this and I thought, ‘I can do that,’ “ quips Slayton.

He chose a woman protagonist because “the plight of women in these kinds of institutional settings interested me. It gave an additional edge and poignancy.”

Women, he says, have “a particular set of difficulties” in big law firms or banks.

“I take this young woman partner who’s not happy at all, personally and professionally, and put her in this big law firm and see what happens.” He adds, “You know the repulsive male partners were going to hit on her.”

The plot was the greatest challenge, he found. “It’s not easy, particularly for this kind of quasi mystery. Some people map out the whole plot in advance. I didn’t. I did it as I went along. So you can be halfway through the book and think, ‘Jeez, what do I do now?’ You get them into this mess and then wonder how they’re going to get out.”

Although Penguin has published his non-fiction, Slayton chose to self-publish his first novel.

“I was intrigued by the whole non-traditional element of independent publishing and e-books,” he explains. “It’s something interesting and different that’s happening in the publishing world. I thought, ‘What do I have to lose if I do it myself?’ And what I had to gain was almost complete control of the whole process.”

He describes the process as “interesting for sure, and fun, but not as easy as people try to pretend.”

He’s now working on another non-fiction book for Penguin about Canadian mayors and already has been thinking about a sequel to Bay Street: A Novel.

He also wants to write more serious fiction and has had for some time a project of that nature in mind.

As for the great Canadian novel, he says, “It’s already been written. I have no aspirations of that kind.”

But, he admits, “I do have a variety of ambitions.

“The only thing not on my side is time.”