Life of the party: A Q&A with Michael Ignatieff 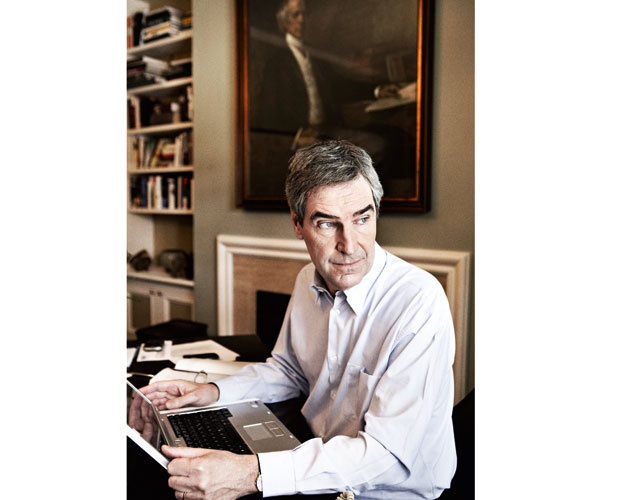 Former Liberal leader and leader of the Opposition, Michael Ignatieff sits down with Kim Izzo to reflect on what went wrong (and right) during his
years in Ottawa

Sitting down for a lunch of seared scallops and spinach risotto at  a Toronto restaurant is a world far far away from Stornaway, the former official residence in Ottawa of Michael Ignatieff – ex-leader of the Opposition, ex-Liberal party leader and ex-politician. But this is where he finds himself chatting about his latest memoir, Fire and Ashes: Success and Failure in Politics (Random House Canada). It is an honest, sometimes biting remembrance of Ignatieff’s meteoric rise in Canada’s national political scene and equally sudden fall from grace. And while he’s at it he has some choice words to say about the Prime Minister.

Kim Izzo: It’s been three years since the defeat. I hate to use the word failure – it feels like another four letter word – but how are you doing?

Michael Ignatieff: There is no “ex” more “ex” than an ex-politician. You might as well just shut up and move on and get back to what you’re doing. One of the things that really came to the rescue is that I went back to teaching that fall. It was really, really good to be in a classroom again. I may not know how to do a bunch of things but I did know how to do this and enjoy doing this and I want to do it better. I feel now, in September 2013, great. I’m in good shape.

KI: What made you write this book?

MI: I was a writer before I became a politician, and you do what you do with writing, which is to get over stuff, to understand stuff and move on. It was a difficult project because if you get beat and you get beat badly, you’ve got a lot of emotions locked up inside, disappointment, anger, resentment, the standard stuff. And you’ve got to get control of that, that is why you write, because if you don’t it’s going to make you a mean, nasty guy for the rest of your life.

KI: You don’t mince words when it comes to Stephen Harper: “[His] is a rare gift to combine the impression of conviction with total opportunism.”

MI: I also say he’s not PM for nothing. This guy is smart, disciplined, very strategic and extremely ruthless. And his great achievement is getting that ragtag and bobtail house ready for prime time and enforcing discipline so he can present them to the country as moderate and competent. People don’t like the Conservatives, but they think they are moderate and competent on the economy. That’s a great achievement politically.

KI: What was the highlight of your time in politics?

MI: The people. There really is no other country in the world where you can begin a day having breakfast with businessmen in Toronto and end it talking to Inuit hunters in the Arctic Circle – and, if you’re really smart, get back to Vancouver at night and have dim sum in Chinatown. It’s that aspect of it. No politician knows the country when they start but, by God, by the end of it, you really do. That was unforgettable.

KI: And the worst part?

MI: What you might expect me to say is betrayal, the negative attack ads. That’s
not the worst. The worst is when you screw it up and make an unforced error, as they say in sports. That’s when you have a hard time inside because it affects your confidence. When you do the right thing but it doesn’t work out, that’s much easier. But when you make a mistake and you think ‘I didn’t need to do that,’ you kick yourself. It’s what you do to yourself, not what people do to you, that is always the difficult thing in life and in politics.

KI: Do you blame yourself for the Liberal downfall?

MI: No, I don’t. I said the night of the election that I accepted responsibility. I take whatever responsibility I have to take but, look, we’ve been bleeding votes for 10 years. We had destroyed our brand with in-fighting between Chrétien and Martin, for which there is no excuse. We allowed a few rogue agents to corrupt our brand for a generation in Quebec and we had given up trying to get votes west of Lake Superior 20 years before I came onto the scene. So, if you have a party with that accumulation of trouble, I’m willing to take my part of the rap for the mistakes I made but I’m not wearing the rest of it.

KI: What would you say was your biggest mistake as leader?

MI: I shouldn’t have tried to bring the Harper government down in September. That was a mistake. There was another way to do this, which I didn’t understand strategically, which is once we voted for that budget in early 2009, which I think saved the country from a depression and gave us political stability when we needed it most. The consequence of that decision was simply to say “See you in a couple of years. We’re going to rebuild the party,” but instead I went too fast, and that was a mistake and it affected my own confidence and the public’s view of me.

KI: You write in your book about the attack ads, the permanent campaign, you must have expected it after what the Conservatives did to Stéphane Dion?

MI: We were expecting it. I think we just couldn’t get the money together to mount a counter attack. Facts are facts. I had been out of the country for 30 years. What am I supposed to say? What I felt and feel still is that I’m a Canadian, damn it, and I’m not that special or untypical. We are the most global citizens of any country I know. There are a millions of us out there, and people stay away for years and don’t feel less Canadian. And the one thing that bothers me, I can accept losing the battle for myself but I don’t want other people to lose it. I’m teaching Canadians whose life ambition is to spend years out of the country, in Zambia or London or Beijing, and I don’t want them to feel that they can’t come back and run for public office just because some hit squad is going to take apart their CV. I’m done. But I’m thinking of these people coming up and I don’t want what happened to me to happen to them.

KI: What do you think about Justin Trudeau?

MI: What I see when I see him working the street is a very skillful professional politician, and that’s important and not a lot of people know that about him. And that’s one of the reasons why I think he’s going to do well. I think people are going to be tired of Harper by 2015. People are looking for an alternative. It’s too early to say now, but there’s an opportunity here, no question.

KI: Any other things you’ve learned since leaving politics?

MI: I didn’t expect how nice people are when you get beat. I can walk across the street right now, and people will stop and say, “How are you doing?” I thought when I lost that I’d have to wear a paper bag on my head, but it’s not true at all. People don’t vote for you but they don’t piss on you either. It’s a good thing about this country: the politicians can be awful to you, the press can be worse but the people by and large, without being sentimental, are actually all right.

KI: Do you regret your choice to return to Canada and run for office?

MI: I don’t regret it. You see it’s simple: I didn’t sit up in the stands, I got on the ice. They can’t take that away from me. I’d do it again but I’d do it better and I’d win, and we’d be sitting here and I’d be the prime minster. That’s what I think.