Making Aging a Time for Reinvention 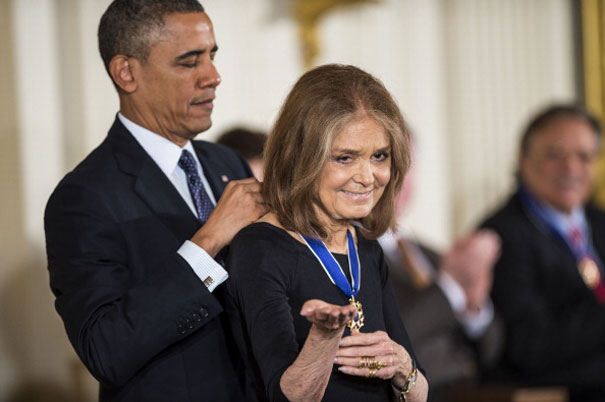 Gloria Steinem (R) receives the 2013 Presidential Medal of Freedom from President Barack Obama at the White House on November 20, 2013 in Washington, DC. (Photo by Leigh Vogel/WireImage)

There’s nothing surprising about Gloria Steinem celebrating her 80th birthday this March by going to Botswana to ride elephants.

Before she left, she composed a list of the good things about starting her ninth decade. One of them was a dwindling libido. “The brain cells that used to be obsessed are now free for all kinds of great things,” she told the New York Times.

“I try to tell younger women that, but they don’t believe me,” she said. “When I was young, I wouldn’t have believed it either.”

Steinem has always been an icon, not just of feminism but of reinvention – something that requires resilience, endurance, flexibility and a great capacity and desire for new experiences.

She famously reinvented the women’s movement by flaunting her attractiveness, by working as a Playboy bunny and telling the tale, by starting up Ms Magazine, the first widely circulated feminist magazine.

But Steinem also reinvented herself.

For most of her life, she proclaimed, “I couldn’t imagine why I would get married. I was happy as I was.” She told People magazine that she backed out of an engagement during her senior year at Smith College because “marriage felt like a restriction, not an enlargement.”

But in 2000, at the age of 66, she married 61-year old David Bale, an animal rights activist and father of actor Christian Bale.

“Being married is like having somebody permanently in your corner,” she said. “It feels limitless, not limited.”

Steinem isn’t the only feminist icon who reinvented herself as she aged.

Germaine Greer, 75, whose book The Female Eunuch was an international sensation in 1970, has a new book scheduled for publication in North America in July.

While her first book was about the nature of being female in a patriarchy and the need for female liberation, her latest book, White Beech, is simply about nature and the need for respecting it.

Greer has been castigated for her inconsistencies about sex, men and marriage. But isn’t inconsistency really just another word for reinvention?

One wit put it this way: “Looking for illogicality in Germaine Greer’s life is like looking for hay in a haystack.”

White Beech, already published in Britain, is subtitled The Rainforest Years. It’s about her restoration of a chunk of Australian rainforest.

“It cost all her life savings, half a million dollars, and her ambition, as ‘an old woman with creaky knees and shockingly arthritic feet,’ was ‘to give the forest back to itself,’ ” reported The Guardian, which deemed the book “inspirational.”

The Telegraph described the book as “maddeningly brilliant.”

Greer herself called the experience “life-changing” – a synonym for reinvention.

There’s another feminist icon who changes roles with ease.

Bell Hooks, 61, is a distinguished professor of English at City College in New York – but she is so much more than that. Described as one of the leading public intellectuals of her time, she’s the author of 30 books about feminism, race, class, gender and contemporary cultures.

Ain’t I a Woman? Black Women and Feminism was named by Publishers Weekly as one of the 20 most influential women’s books of the last 20 years.

And yet, her most recent book is a highly praised collection of poetry. Appalachian Elegy won the 2013 Best Poetry Award presented by the Black Caucus of the American Library Association.

All three women were influential in leading women toward equality and liberation. Now they’re role models for making aging a time for reinvention.