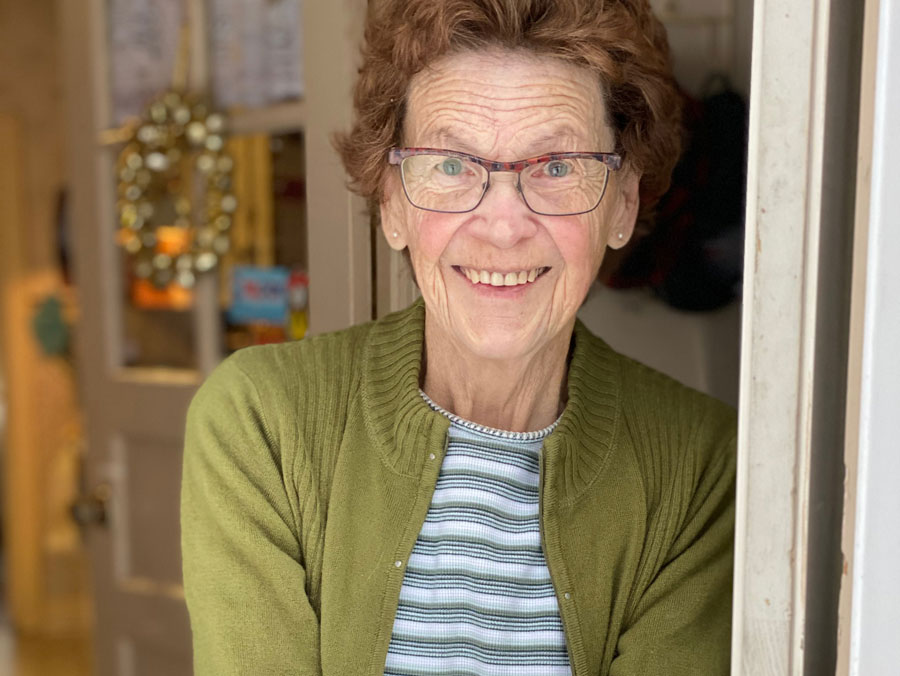 Jenny Krupa, 87, is the Alberta grandma behind the TikTok account 'j-dog,' an Internet sensation created by her grandson Skylar, 19. Photo: Courtesy of Skylar Krupa

Jenny Krupa has two lives. In Thorhild County, Alta., a 45-minute drive north of Edmonton, she’s a wife, a grandmother and an avid bingo player at the seniors drop-in centre on Wednesdays.

But on the video-sharing app TikTok, where she’s better known as “j-dog,” the 87-year-old Alberta grandma has found her 15 minutes of fame as an up-and-coming internet celebrity closing in on a million fans.

Geared to ages 12 and up, TikTok allows users to create and publish short videos, often set to pre-recorded music or sound bites. Viewers can “like,” comment on or share the videos to other social media platforms such as Facebook, Instagram or Snapchat.

It’s currently No. 1 in the entertainment category on Apple’s App Store, and boasts more than 500 million downloads on Google Play. But if you ask Jenny how she got on the app or even how it works, you will probably get a shrug.

“I really wouldn’t know,” Krupa says with a chuckle.

Despite starring in more than 120 videos, Krupa admits she’s not much of a netizen, and the smartest phone she owns is limited to talk and text.

And even though a few of her videos have gone viral since the account debuted last summer, Krupa isn’t on TikTok for the fame. As far as she’s concerned, she’s performing for an audience of one.

“I want to satisfy my grandson,” she adds. “He’s on this thing so I want to help him.”

Behind the scenes, j-dog is the creation of Skylar Krupa, 19, who lives on his dad’s farm next door. His grandparents’ home, on the same property less than 30 metres away, is the setting for most of the videos. Skylar is there almost every day, some time between The Price is Right at 11 a.m. and Wheel of Fortune at 8 p.m., to direct his grandparents into realizing his virtual visions.

A budding content creator who aspires to internet stardom, Skylar created the TikTok account in August after he was laid off from his a job as a labourer for a company that made chemical fire retardant.

These days, he shoots, edits and posts the videos to the account, trying to make the next viral video. He’s the mastermind behind j-dog’s digital persona — a sometimes sassy, often absent-minded provocateur with a dark sense of humour – but Skylar refuses to be photographed and doesn’t appear in the videos or on j-dog’s Instagram account.

The Perks of Being Old

In one video, Jenny points to captions that list the “perks of being old,” which take a few sardonic pot shots at stereotypes associated with the elderly.

“Can hit a person with my car and THEY say sorry for walking on the sidewalk,” one says.

“I get a free lunch at least once a week going to a friend’s funeral,” another reads.

Others take a more playful turn, such as when Skylar cast his 88-year-old grandfather, Mike, to parody a scene from the 2009 Disney/Pixar tear-jerker Up.

After wistfully starring at a framed photo of him and his wife of 66 years, Mike ties a bouquet of helium balloons to his house in a bid to launch it into the atmosphere.

While waving his home goodbye, Jenny appears from around the corner to ask, “What the hell are you doing?”

The inspiration for the videos, Skylar says, often flow from trending sound clips circulating on the app. But sometimes he uses his grandmother as a muse and draws on her habits, such as her penchant for playing bingo.

Earlier this month, the account posted its most popular video to date, which has been viewed more than 13 million times and earned nearly three million likes. In it, Jenny ambles toward the camera, deadpan, below a caption that reads, “Walks over to see my Grandchildren at a Family event.”

Set to Dua Lipa’s 2019 single Don’t Start Now, Jenny then whips around to walk away in the opposite direction when a second caption appears that reads: “Sees my blue haired granddaughter.”

In the early days, Skylar tried to explain to Jenny the concept of views and the reach his videos were getting online.

“She understood we were getting views but didn’t understand what it meant,” he says. The concept didn’t really click until Jenny started getting attention in real life.  Last week, she recalls, she received a warm welcome at her doctor’s office from people who recognize her from the videos.

“Before they never knew who I was,” she says. “I was just a person walking down the street.”

Despite her status as a minor cyber celebrity, Jenny is reluctant to take credit for her newfound internet fame. Rather, she sees herself as a willing vessel for her grandson’s visions, even if she doesn’t always understand them.

Skylar admits he doesn’t always explain the concept behind a video to his grandparents, and typically sticks to giving them blind directions. The humour, he adds, is typically geared toward people his own age, and his grandparents don’t always get the punch line.

In one video, Jenny helped draw penises in the snow on Mike’s car (in real life, it was her car) in an act of revenge because he refuses to help her shovel snow. When Jenny realized what she was drawing for Skylar, she scoffed a bit, laughed and wiped off the window when they were done.

There isn’t much his grandmother won’t do for a video, but she drew the line when he asked her to pop her dentures out, and sometimes she won’t go outside if it is too cold.

One shoot she recalls fondly involves pulling a practical joke on her husband by rigging a two-litre bottle of Diet Coke to erupt after he twists the cap.  That scene took about three takes, but it was still a lot of fun.

“Pop and everything went all over the kitchen floor,” she says. “We just laughed about it. We cleaned it up but we were laughing.”

While Skylar’s account continues to collect thousands of followers every day, he has found a way to make a profit from it. To feature a song in one of his videos, a third-party company that works with the record labels will pay $25 for every 20,000 users following his account.

Jenny says the most of her family is impressed with Skylar’s entrepreneurial spirit. She’s just glad he has found something to keep him occupied and is happy to indulge her grandson – with conditions, of course.

“Unless he wants to do something when I’m going to bingo,” she is careful to note. “I do go to bingos.”