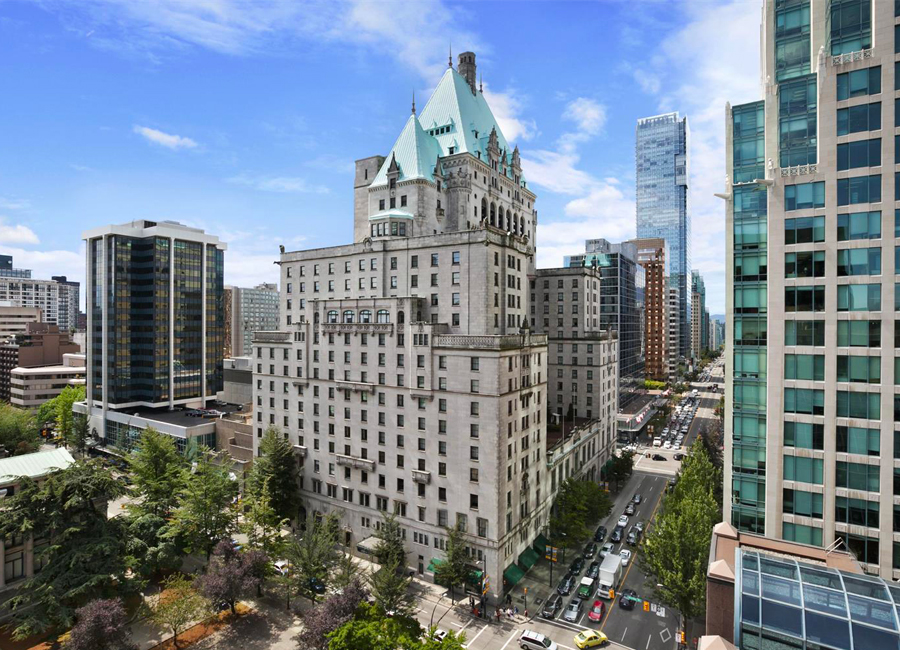 Careful attention was paid to preserve the hotel’s extensive list of heirlooms which included its guest room doors, made in 1939 of English harewood with bronze inset doorplates; the elaborate bronze hallway doors; the African Sapele wood paneled walls of the elevator lobby accented with solid bronze inlay strips; and the English black walnut veneer-paneled walls of the Lt. Governor Suite originating from a single walnut tree and so skillfully matched that the same markings may be traced symmetrically around the entire room. A New Era of Glamour

With a luxurious and contemporary design inspired by the romance of travel in the 1930’s, Notch8 Restaurant & Bar brings a new era of glamour to the lobby of Fairmont Hotel Vancouver. Named after a train’s top speed, achieved only by the most skilled conductors, the restaurant pays homage to the hotel’s storied history and legacy as a luxury hotel along the Canadian Pacific railway. The current Hotel Vancouver is the third of its name. The first was a four story, brick structure that had only 60 rooms and looked and functioned much like a farmhouse, opening in 1887. It was located on the corner of W. Georgia St. and Granville St. The second Hotel Vancouver broke ground in 1912 on the same site as the first, and opened in 1916, becoming the meeting place for Vancouver society. It was a beautiful, 14 story hotel, but was poorly constructed and soon began to deteriorate. The present and third Hotel Vancouver broke ground on Dec. 4, 1928 and took 11 years to complete because of the Great Depression. The hotel was officially opened in May 1939 by a visit from King George VI and Queen Elizabeth during their Royal Tour of Canada. Considered a feat of engineering upon completion, Hotel Vancouver’s timeless luxury and iconic design continues to inspire awe in visitors and locals alike.

Known as the ‘Castle in the City’ and reflects timeless luxury and history of Vancouver, Fairmont Hotel Vancouver holds a prime downtown location minutes away from some of the city’s  biggest attractions. Fairmont Hotel Vancouver has recently completed a $12 million restaurant, bar and lobby renovation, providing the ‘Grand Dame’ with a sense of renewed luxury. Book your next vacation with us!

OR to take advantage of the Fairmont Zoomer Offer

Visit www.fairmont.com/americas/zoomer and receive 10% off, a $50 Food & Beverage Credit per stay, on a 2 night minimum stay at any of the participating Fairmont properties.