Your Risk of Osteoporosis Is Real 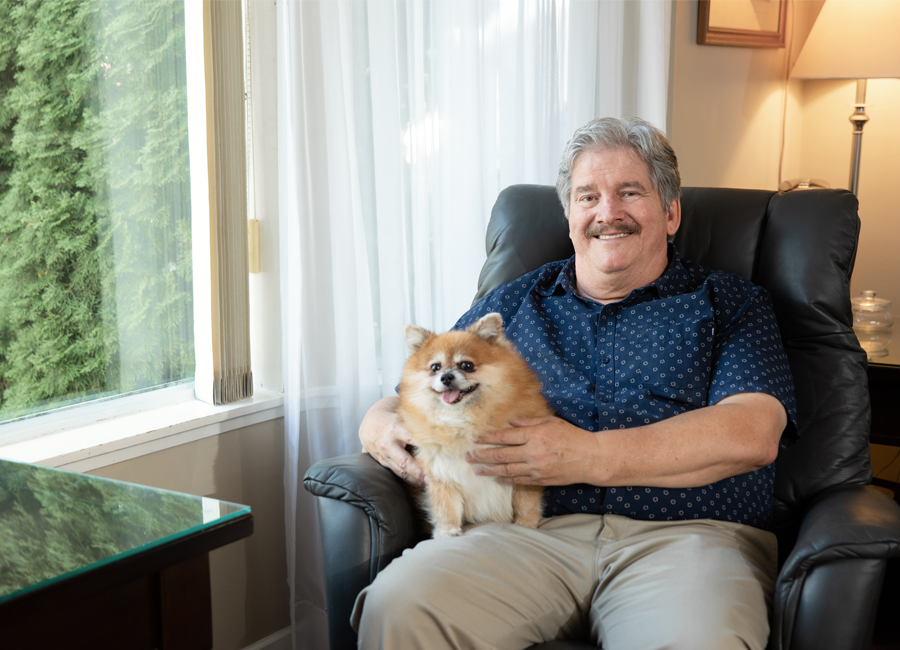 LARRY THOUGHT HE WAS JUST ACCIDENT-PRONE

Before being diagnosed at 48, Larry broke bones in his back, arms, ribs and shoulder blades doing simple things like walking or going down stairs. No one thought there was an underlying cause and that he was at risk of further fracture. “Everybody thought I was a klutz. I’d fall and break something and there goes Larry with another cast.”

More than 80% of all fractures in people 50+ are caused by osteoporosis. The disease causes bones to weaken over time without any signs or symptoms. “I had no idea that osteoporosis was something that affects one in five men. I was astounded to learn I had it,” Larry says. “You really can’t tell something’s wrong until you start breaking bones.”

Osteoporosis can affect people at almost any age, but it’s most common among those 50 years and older. Factors that affect bone health include hormones, nutrition, smoking, alcohol, and certain medical conditions and medications. Larry says genetics played a significant role in his osteoporosis. “My mother broke her hip and was bedridden for a year before she passed away from complications.” His sister has osteoporosis too. Larry’s sedentary lifestyle also contributed. As a federal bureaucrat for 35 years, most of his career was spent sitting behind a desk, in meetings and commuting.

Dr. Cheung says bone health doesn’t get the attention it deserves. “It’s only when multiple of these occurrences happen that someone connects the dots. But then it’s so late. Can you imagine a patient with eight heart attacks before they get diagnosed?” Larry was surprised by its potentially devastating consequences: 37% of men and 28% of women who suffer a hip fracture will die within one year. Embarrassed he had a “fragile woman’s disease,” Larry kept it from all but his family and closest friends. Over time, he met other men with osteoporosis and started raising awareness. In the almost 20 years since his diagnosis, Larry has taken treatment and steps to protect his bones. “Osteoporosis and the fact that you could break a bone, it guides all the decisions you make — what you’re going to eat and drink and what you’re going to do.”

Larry knows he has to watch what he eats and he’s careful to enjoy his favourite drink, craft beer, in moderation. Nordic walking has made a difference. Not only does it engage muscles and improve cardio, it’s taken him places he never would have gone. “For years I wouldn’t have considered going on many of the nature trails. But with Nordic poles, they give you the confidence that you’re going to be better balanced and get over the small obstacles.”

USE IT OR LOSE IT

Peak bone mass is achieved between the ages of 16 and 20 in women and 20 and 25  in men. We start losing bone mass in our mid 30s. Having a good diet and physical activity are  important to maintain bone health, Dr. Cheung explains. “You need to use it so you don’t lose it. If you’re sedentary and don’t do a lot of weight-bearing or balance exercises, you’ll lose bone as you age.”

“Don’t kid yourself! You too might be at risk,” says Larry. Complete Osteoporosis Canada’s free Know Your Risk quiz at risk.osteoporosis.ca. If you’ve had a fracture or have other risk factors, talk to your doctor about bone health.