Easily Bruise? Now You Have Two Options to Use! 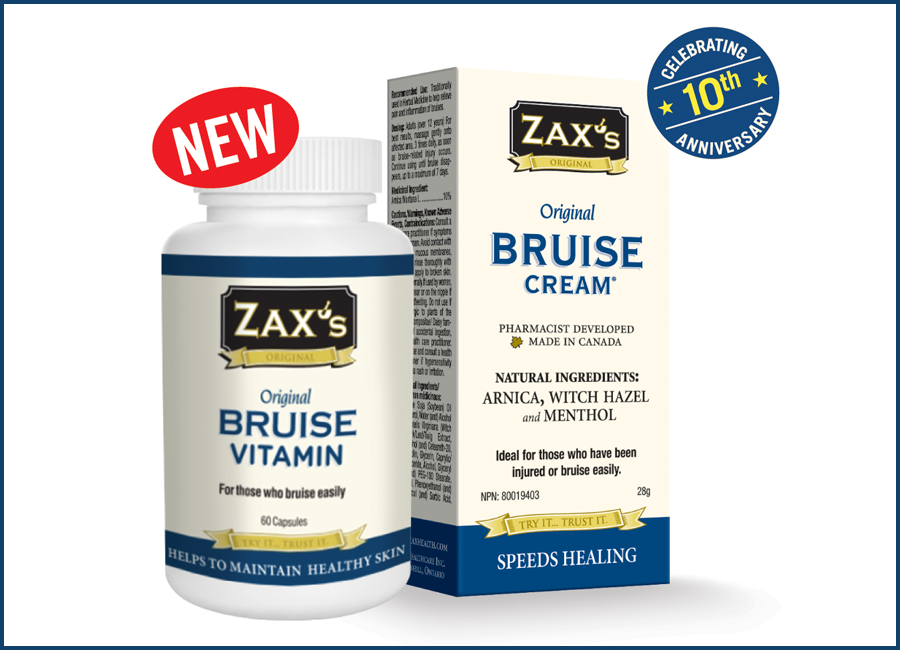 It happens all the time: you smack your shin on the bedpost or bump your arm on a doorknob, and then spend the next several days watching a kaleidoscope of colours shift and change as they mark the spot where you injured yourself.

Bruises are a fact of life. They’re your body’s natural response to these kinds of injuries, and they happen because blood from damaged blood cells collects near the surface of the skin. In most cases they are simply an unsightly nuisance. But of course if you have unexplained bruises that occur easily or for no apparent reason, a bruise that isn’t getting better after a few weeks, or one accompanied by extreme pain and swelling, you should talk to your doctor.

You may find that you bruise more easily as you age, and this is perfectly normal too. Our skin gets thinner and the tissue that supports the underlying blood vessels becomes more fragile, so bruising happens more often than it did when we were younger. Women also have a tendency to bruise more easily than men because they have structurally different skin and a higher concentration of fat in certain areas, including the legs.1

We normally just try to hide a bruise under a long sleeve, or perhaps disguise it with some makeup and carry on.

But thanks to Zax Healthcare, a family-owned Canadian company, now you can be proactive and actually do something to help protect against bruising before it even happens.

Zax Healthcare was founded in 2006 when President and CEO, Alyssa Rolnick, a registered dietitian and proponent of natural health, began searching for a better treatment for bruises after her husband Mark, a pharmacist, sustained a series of bruises while playing hockey.

After two years of research and development working with a leading team of chemists and botanists, Zax’s Original® Bruise Cream was born. Using a proprietary combination of Arnica and Witch Hazel, which are recommended by WebMD for bruising, along with a hint of Menthol, the topical cream heals bruises four days faster2, improves discolouration, and reduces the pain and inflammation associated with bruises.

Creating a natural treatment to help speed healing once a bruise has happened was a pretty amazing accomplishment. But the team at Zax wanted to do more for customers asking for something to help build up a tolerance to the bumps that lead to bruising.

What if, they wondered, you could develop a naturally sourced, pharmacist-developed, oral supplement targeted specifically to people who bruise easily? What if those “easy-bruisers” finally had the power to minimize bruises before they even happened?

If you’re someone who is used to being black and blue, this might sound too good to be true—but it’s not. Zax’s Original® Bruise Vitamin is the very first supplement of its kind designed specifically for people who bruise easily to help protect against bruising. The formula, approved by Health Canada, is a unique blend of vitamin D3, vitamin C, citrus bioflavonoids, zinc and vitamin K, which are the most proven vitamins and minerals known to reduce bruising. Taken daily, it strengthens skin and can help protect against future bruises.

As with any supplement, be sure to read the full label to ensure that these products are right for you. If you take blood-thinning medications, check with your doctor before taking the Bruise Vitamin.

As you get older, it’s important to be proactive and take control of your health and wellness. When it comes to bruises, Zax really has you covered!

For more information on Zax’s bruising, natural skin care, and other first aid products, or to get $10 off in coupons click here.