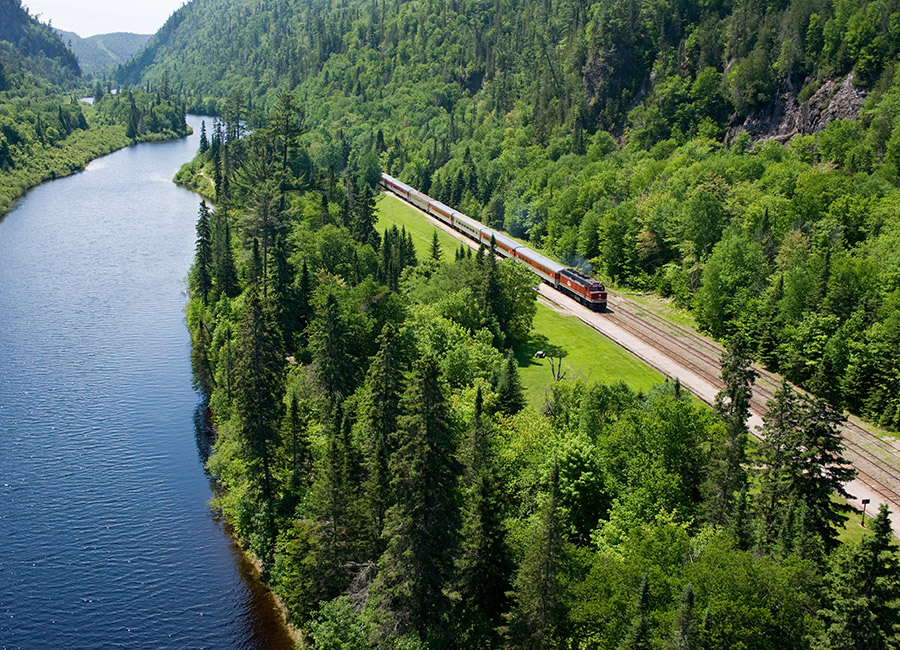 Embark on a one-day excursion into the heart of Canada’s pristine wilderness with a ride on the Agawa Canyon Tour Train.

These days, we don’t get the opportunity to ride the rails as often as people did in the past. Today, there may be faster ways to get from A to B in some cases. But train travel still holds an allure for those adventurous souls who want to enjoy the journey every bit as much as the destination.

This holds especially true for the Agawa Canyon Tour Train, which takes you on a scenic ride through the untouched wilderness that inspired many of the Group of Seven’s most famous works. The journey, which carries you 114 miles north of Sault Ste. Marie, Ontario, is made even more captivating with recent improvements made to the boxcars. Now you can marvel at the scenic landscape through the new, larger windows.

Another great improvement is the GPS-triggered commentary that keeps you apprised of upcoming points-of-interest. The ride-along audio, which is broadcast in six languages (English, French, German, Japanese, Korean & Mandarin), takes you through the rich history of the region with stories of the Ojibway, fur-trading courier de bois, explorers, pioneers and all the colourful figures who made this and their home.

And, don’t forget your camera! It’s a truly picture-perfect adventure with breathtaking landscapes that appear to have leaped right off of the canvases of the Group of Seven paintings. Take photographs of the rugged wilderness that inspired Lawren Harris, J.E.H. MacDonald, A.Y. Jackson, Arthur Lismer and Frank Johnston to paint their masterpieces. Between 1918 and 1922, the boxcars on the Algoma Central Railway served as their mobile studios and overnight residences while the artists spent their days sketching from canoes and atop high rocky vistas. The Agawa Canyon Tour Train is a great way to see Algoma, but it isn’t the only way to explore the region. There’s so much more to see, by road, trail and water too. All it takes is one glance at the wilderness surrounding Sault Ste. Marie to understand why its motto “Naturally Gifted” is so apt. To the north and east, the Trans-Canada Highway bisects a rugged gauntlet of Canadian Shield hills; from atop the International Bridge, Lake Superior gleams like quicksilver and the St. Mary’s Rapids race between sandstone shores.

Today, signs of human occupation are minimal compared to Algoma’s endless sprawl of lakes, rivers and trees. Now imagine what it was like over a century ago, when this natural wonderland was a true frontier. Or, better yet, see what it was like for yourself through the eyes of resident painters during this period; artists like Anna Jameson, George Catlin, Paul Kane and William Armstrong.