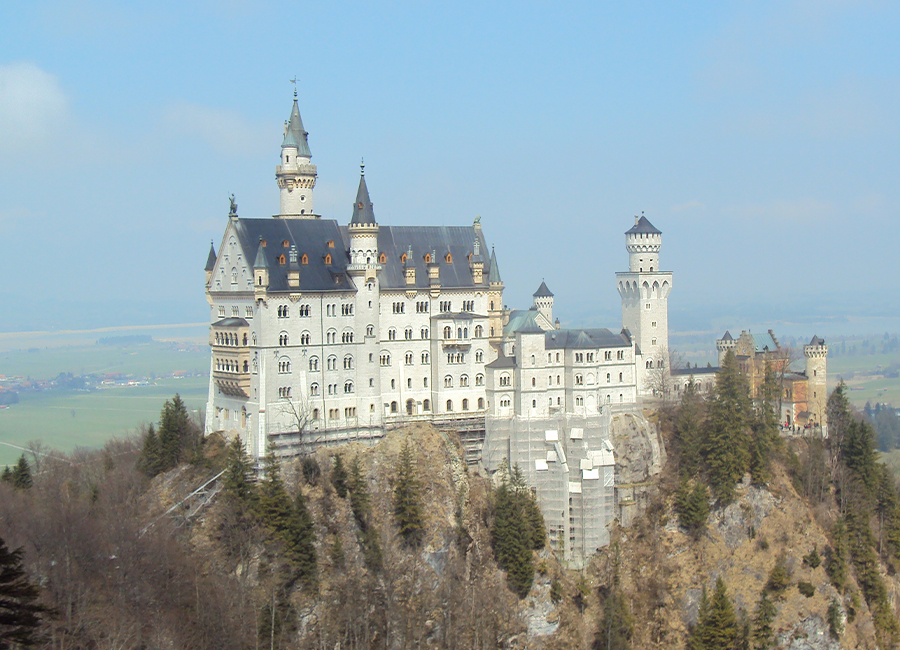 Have you ever imagined what it’s like to enter into the fabled world of royalty? Are you interested in learning how the lords and ladies lived during medieval times?  Well, now is your chance. If you’re ready to explore this way of life, check out the castles below and see where you’re inspired to visit.

Fairy tales come to life at Bavaria’s famous Neuschwanstein Castle, said to be the inspiration for Sleeping Beauty’s castle in Disneyland. Built high on a rocky hilltop nestled in the Bavarian Alps, this Romanesque Revival palace is the most photographed castle in Germany. The castle was built by reclusive King Ludwig II as a private place where he could shy away from the public life. Appreciate the power of royalty as you marvel at the spectacular site of this 19th century castle built entirely for one person. Standing before the sky-high turrets and limestone facades, one can easily imagine princes and princesses dancing the night away inside. With over 1,000 years of work behind building Prague Castle, you are sure to feel like a nobleman or woman while walking around the largest castle complex in the world. The extent of the complex will leave you in awe as you explore the series of churches, palaces, and buildings scattered throughout. As it was erected over many years, each aspect of the complex represents a different century with various architectural styles. This is your opportunity to stroll through history and travel through the centuries.

Feel like you’ve stepped into medieval times at Scaliger Castle, more commonly known as the Sinking Castle, located on Lake Garda. Relive history as you discover this rare example of a medieval port fortification. With authentic draw bridges and a moat, this 13th century castle was used by the Scaliger family to protect their beloved city. See this fascinating castle while cruising the pristine waters of Lake Garda. Step into Lord Grantham and Lady Mary’s world when you visit Highclere Castle, the set for Downton Abbey. While this period television drama’s aristocratic family is fictional, it has housed several noblemen and women and is home to the Earls of Carnarvon. See the 5th Earl’s passion for Egyptology come to life as you discover the glory of his achievements displayed within the castle in one of the world’s best private Egyptian collections. Come to know how royalty lived as you wander around this castle that has hosted many events over the years including housing and healing war victims. Behold this historic fortress which dominates the skyline of Edinburgh from its position on Castle Rock. Edinburgh Castle is the heart of the city and the people of Edinburgh still look to it as a symbol of protection, always watching over them. Dive into history as you discover the oldest Crown jewels in Britain, known as the Honours of Scotland, as well as the Stone of Destiny, traditionally used to inaugurate monarchs, both on display in the castle. As you stand above the city, appreciate all that this rock has seen since the first royal castle was built here in the 12th century.

Spend some time uncovering the majesty and regality of these magnificent castles around the world. You don’t need royal blood to explore the opulent halls and impressive grounds – just an appreciation for noble heritage. Crowns and scepters are optional, but not required.