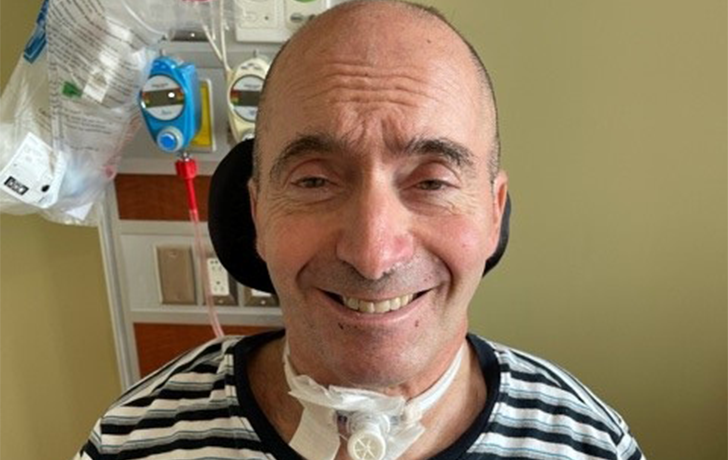 Taking computer classes has been John Hornstein’s unlikely dream for over a decade, ever since a 2010 cycling accident damaged his spine and left him with little mobility from the neck down.

While on a lakeshore ride, jaywalking teens stepped into the street, and John had to think fast. The Sault Ste. Marie artist hit his brakes so hard he flew over the handlebars, crashing chin-first into the pavement. It would take days to understand how badly his spinal cord had been crushed.

“After my injury, my girlfriend said I was moving my hands quite a bit, waving my arms,” John says. But, within days, that movement stopped. His spine’s swelling progressed rapidly, due to a previously undiagnosed degenerative condition known as spinal stenosis. The accident compounded the condition, causing traumatic swelling of his stenotic spinal cord and killing the nerves from his C4 to his C6 vertebrae.

Almost in an instant, John saw his life’s ambitions as an artist slip away, and his future felt uncertain.

Today, assistive technology is giving the 64-year-old new hope for a digitally assisted independent life and, soon, a return to his lifelong passion, creating art.

Creating his art is all possible through technology, like sip-and-puff. Once only used to power wheelchairs, the straw-like device is similar to a mouth-controlled joystick, and recently allowed John to use a computer for the first time in 11 years. He admits he has much to learn, but studying is a joyful pursuit for the artist – one he thought might never be possible again.

Critically, John is also in the process of finalizing a caregiver schedule that will soon have him moving from the hospital to his home, which is already set up.

“The technology currently coming out is making it possible for people with disabilities to live more or less normal lives,” he says.

Life-changing developments like those experienced by John are being fueled by a newly expanded partnership between the innovative TELUS Tech for Good program and the national charitable organization, March of Dimes Canada.

TELUS launched Tech for Good in Alberta and British Columbia in 2018 to better support people with disabilities who require professional assistance to independently use or control their mobile devices. The program has now expanded nationwide in partnership with March of Dimes Canada, whose own mandate is to support Canadians with disabilities, their families, and caregivers with achieving independent and fuller lives.

The program offers personalized, virtual one-on-one assessment, customized recommendations, training, and support with mobile devices — anything from an iPhone, Android, or iPad to an Amazon Fire, Kindle, or Galaxy Tab. In some cases, based on individual need, additional assistive technology may be required for persons with disabilities to use their smartphone and tablet. There is no one-size-fits all solution. With Tech for Good, participants can learn to magnify content on a screen, use voice-activated controls and speech-to-text functions, or screen readers to make it easier to use their devices and realize the technology’s benefits. Additional assistive technology might include an external keyboard or mouse, instead of using the phone’s touchscreen, or a specialized stand for the device, making it easier to access independently.

In partnership with March of Dimes Canada, Tech for Good enables equitable access to mobile devices, empowering people with disabilities to live, work, and play in our digital world.

“As a national charity devoted to supporting and empowering people living with disability, the Tech for Good program is a perfect fit. Our team will work with clients to ensure they are connected and comfortable with their mobile devices and the assistive technology they require,” says Len Baker, President and CEO of March of Dimes Canada.

For John, the program is enabling a return to a productive, independent life that approximates his experience prior to the accident — “as much as that is possible given my circumstances,” he says.

Using small movements, in this case sipping and puffing air, he is able to control the pointer on his computer, like using a mouse. He has re-learned desktop computing fundamentals and also looks forward to using voice-controlled technology like the Echo Dot to make his mobile phone work better for him. Using the Echo Dot with the iPhone brings vast possibilities, including controlling a “smart home.”

“I plan to use my iPhone with regards to the normal pains of life, such as turning on lights, turning on and off thermostats, the computer, the TV, and so on,” he says.

Access to technology has also dramatically improved his sense of community and safety.

With a new Bluetooth earpiece, John, who is soft-spoken since undergoing a tracheotomy, will be better able to communicate with voice-controlled personal assistants, such as Echo Dot or Siri, in his home, and with friends and family over the phone.

This last point is the most important to John. Life before the smartphone left him “more or less incommunicado. I found it very difficult to not be able to call people.”

Now, when he’s not chatting with friends or learning new devices, he’s working to further his artistic aspirations.

John describes his digital creations as “designing images and patterns, and then overlapping them to be sympathetic images” through software like Photoshop. Software has come a long way, so John’s diligently studying the evolution of computer-aided art programs.

Losing his mobility cost John much of what he loved in that first decade following the accident, but these days you’ll find no bitterness in him, only ambitions for the future.

“I’m currently working with Squarespace to create a website,” he says. It heralds another new chapter for John, and will be another place of his own.

“I believe that this website will improve my life,” he says. “And I look forward to using it to showcase my previous achievements and to open new opportunities for me.”