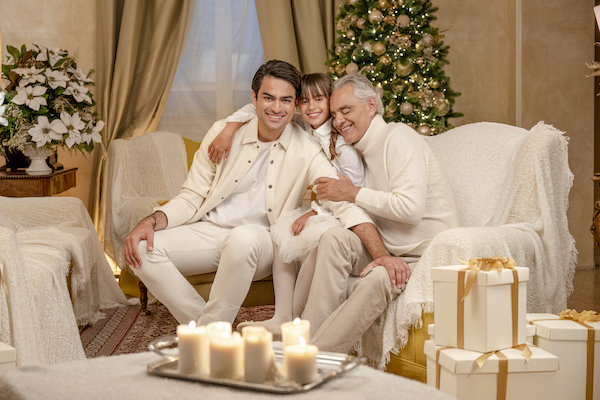 This holiday season, internationally-renowned tenor Andrea Bocelli has teamed up with his 25-year-old son Matteo Bocelli and his 10-year-old daughter Virginia Bocelli for their first ever album together, A Family Christmas – out now via Decca / Capitol Records.

Produced by Canadian composer and multi-Grammy® and Academy Award® nominee Stephan Moccio, A Family Christmas showcases the Bocelli’s multi-generational musical talent in a range of festive favourites. “We are offering our small, intimate, and heartfelt gift to anyone who wishes to enjoy the soundtrack of Christmas in the Bocelli home” the family says.

A Family Christmas captures the Bocelli festive spirit in full flow, with new renditions of traditional carols arranged for all three voices, including ‘Away in a Manger’ and ‘Joy To The World’, as well as popular Christmas tunes from around the world such as ‘Feliz Navidad’ and ‘Il Giorno Piu Speciale’, another brand new track written by Federica Abbate, Cheope, Katoo and Andrea Bocelli. The trio of complementary voices intertwine and echo on the song ‘Do You Hear What I Hear?’, which provides a stirring opening to the album.

Each of the three Bocelli performers gets a chance to shine on A Family Christmas with solo tracks, duets and trios. For 10-year-old Virginia Bocelli, this is her first appearance on an album, having previously joined her father for a spine-tingling performance of ‘Hallelujah’ during 2020’s hugely popular Believe in Christmas concert, livestreamed from the Teatro Regio di Pama. She provides the tender opening to ‘Away in a Manger’ and ‘Over The Rainbow’, as well as performing solo on ‘When Christmas Comes to Town’.

Meanwhile, 24-year-old Matteo Bocelli is enjoying the beginning of his own successful solo recording career, after signing to Capitol Records in 2019. He shot to fame in 2018 after duetting with his father on the hit song ‘Fall On Me’ from Andrea’s best-selling album, Si. The emotive video, which features images of father and son through the years, has now surpassed 100 million views. Matteo and Andrea reunite on ‘Have Yourself a Merry Little Christmas’ and Matteo duets with Virginia on ‘Happy Xmas (War is Over)’, before taking a solo turn on ‘I’ll Be Home For Christmas’, which closes the album.

For Andrea Bocelli, the most celebrated classical singer in modern history, the chance to work with Matteo and Virginia on this album has been a source of great joy. He says, “I think there is nothing more beautiful than making music with your kids; I consider it a privilege.” As well as performing with his son and daughter on many of the Christmas songs, Andrea takes the lead on ‘The First Noël’ and ‘Buon Natale’.

Andrea’s emotive and instantly recognizable voice has earned him millions of fans around the world. In April 2020, he broke records with his emotionally charged Music for Hope performance from the historic Duomo cathedral in Milan. His unforgettable Easter performance ranks amongst the biggest musical live streams of all-time and the largest simultaneous audience for a classical live stream in YouTube history.

Reflecting on their new album A Family Christmas, Matteo concludes, “Singing these songs together, feeling the holiday warmth with my family is something really special. That’s what Christmas is about – making memories together to cherish forever. It’s really exciting to think that people will have a copy of our album sitting wrapped under the tree.”

Watch the enchanting music video for The Greatest Gift, marking the first music video of the three family members together:

A Family Christmas is available now
on CD, vinyl, download, and streaming:
HERE