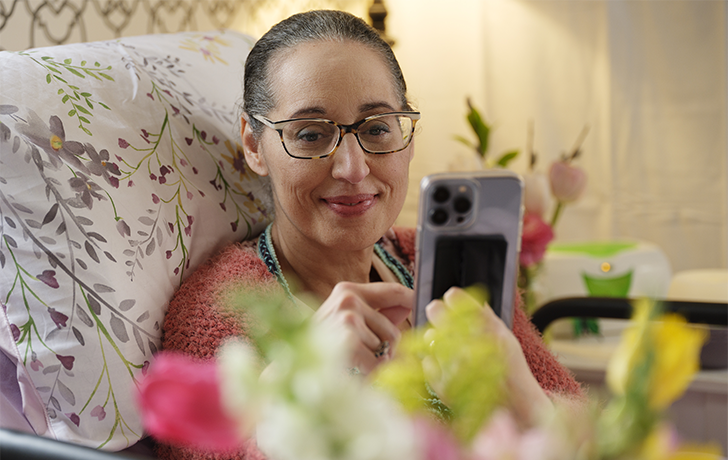 Allison Edwards (pictured) says her experience with TELUS’ Tech for Good program has been “life-changing”,  allowing her to stay connected to the world following an MS diagnosis.

The Tech for Good program, delivered in partnership between TELUS and March of Dimes,  means more Canadians with disabilities can independently use their mobile device to improve their quality of life.

The first time Allison Edwards knew something was wrong was eight years ago. She was walking her daughters to school one September day and noticed her left leg dragging. It didn’t seem significant at the time, but, as the problem worsened, she made an appointment to see her doctor. It took seven months and a litany of tests to confirm her diagnosis: multiple sclerosis (MS), an autoimmune disease of the nervous system with no known cure.

Her reaction was one of relief, “because then I knew what it was,” says Edwards.

While there are a wide range of symptoms, MS can cause a decline in mobility and muscle coordination, often leaving those with the disease increasingly isolated and in need of support services. In fact, Canada has one of the highest rates of MS in the world, with one in 400 people diagnosed with the condition, according to the MS Society of Canada.

The need for assistive technology and accessibility accommodations – whether it’s an app to enhance cognition or a hearing aid –  has increased in recent years, due in part to conditions like MS. UNICEF and the World Health Organization (WHO) expect the number of people who would benefit from assistive technology to grow to 3.5 billion in 2050, an increase from the current 2.5 billion people globally, as people age and as noncommunicable diseases grow.

This growing need is one of the reasons TELUS and March of Dimes, a national not-for-profit organization that provides support services to Canadians with disabilities, have come together in a multi-year partnership to deliver the Tech for Good program.

The program, which started in Alberta and B.C. in 2018, enables people with disabilities to independently control their mobile phone or tablet. Professionals from March of Dimes – called Assistive Technologists – will, for instance, help educate participants  on how to use their devices’ built-in assistive technology features, such as text-to-speech and recommend software, such as apps that allow people to communicate more visually .

So far, 6,450 people have been part of the program and it’s ultimately what has helped Edwards stay connected with her family and friends.

As her flare ups (which is when new MS symptoms occur or old symptoms worsen) increased in frequency, they took a toll on Edwards’s body, requiring large amounts of steroids to manage the worsening symptoms each time. In 2019, her doctors suggested a new treatment that could halt progression of the disease – a stem cell bone marrow transplant and chemotherapy that “resets” the immune system.

The one drawback to the treatment, which was ultimately successful in that she hasn’t had any subsequent flare ups, is advanced osteoporosis. Shortly after returning home from the hospital in March 2020, she broke her hip, which took Edwards from somewhat mobile to housebound. And while, in those early days of the pandemic, people around the world shared her experience of isolation, eventually restrictions were lifted – for everyone else.

“I’m still in isolation, so I’ve had to make things work,” she says.

Fortunately, Edwards discovered Tech for Good, something that has been “life-changing,” she says. The program has helped Edwards learn to use voice controls and transition to a tablet from a mobile phone, which allows her to stay better connected to the world. She makes vision boards on her iPad, which she shares with her community of family and friends – about 30 to 40 people – via email. They’re inspiring works of photography, art and writing that she uses to convey her current thoughts, experiences and recovery journey.

Edwards also uses assistive technology to create a monthly newsletter for viewers in her husband’s weekly live stream. These newsletters can stretch to as long as 40 pages, complete with interviews, and none of this would be possible without the help she receives from Tech for Good.

“It’s a magazine, basically, and I’m the writer, the publisher, the editor.”

Whenever she has questions, Edwards reaches out to her assigned Assistive Technology Specialist, Samantha Del Greco, who responds to her within the day, even if it’s just to let her know that they have seen her email and will get back to her soon.

“You build up that relationship, and [Samantha] knows my needs as things change,” she says. “And that’s the thing with MS, or any sort of disease that’s progressive, your needs change as the years go on.”

Despite any barriers she experiences, Edwards still has a smile on her face and remains positive, and Tech for Good has helped with that.

“The biggest thing for me is being able to keep connected to the world and to my community,” she says. “It’s pretty challenging, the way that I’m living and my situation, but I’m also very fortunate. I’m very happy.”