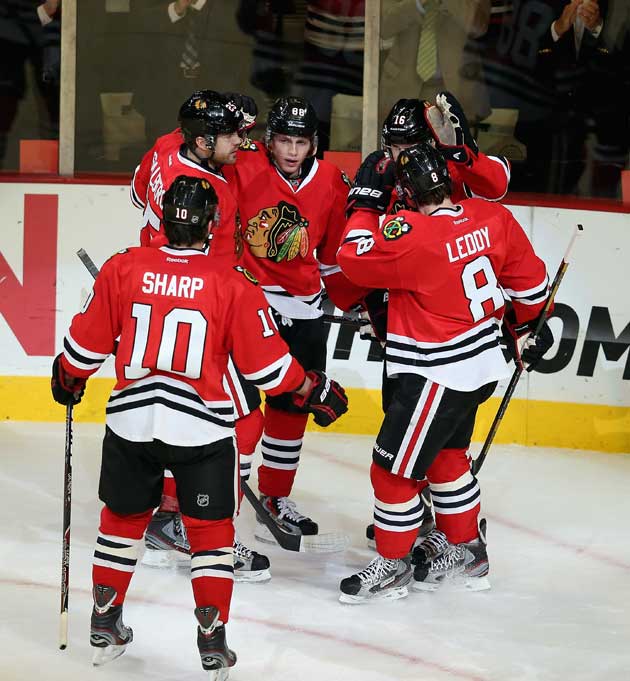 To say the Chicago Blackhawks are having a good season is an understatement.

Incredibly, the high-flying ’Hawks from Chi-town haven’t lost a single game this year, at least not in regulation. They’re 19-0 in regulation, with three shoot-out losses. During the course of this amazing start, they’ve set the record for most consecutive games with a point to begin a season. (Update: The Hawks’ Wednesday night 3-2 win over Colorado keeps the streak going, now 24 consecutive games with a point.)

The team is winning for a number of reasons: excellent goaltending (previously thought a weak link in the chain, Corey Crawford is sporting an unheard of .945 save percentage), solid defence and a bunch of forwards who all seem to score.

The forwards are led by Patrick Kane, who’s evidently put his partying on hold while he racks up the points this year. This recent shoot-out goal winner against Detroit’s Jimmy Howard tells you all you need to know about how good this gifted superstar is when he concentrates on hockey.

Chicago’s 41 points puts them in first place by a wide margin over everyone else and has made them the early favourite to win the Stanley Cup.

They have to lose at some point, don’t they? In their next five games, they play below average opponents: Minnesota, Colorado twice, Edmonton and Columbus. A fearsome schedule it isn’t and, if all goes to form, the Blackhawks could pass the halfway point of the season without losing a single game in regulation. It’s unlikely that record would ever be broken.