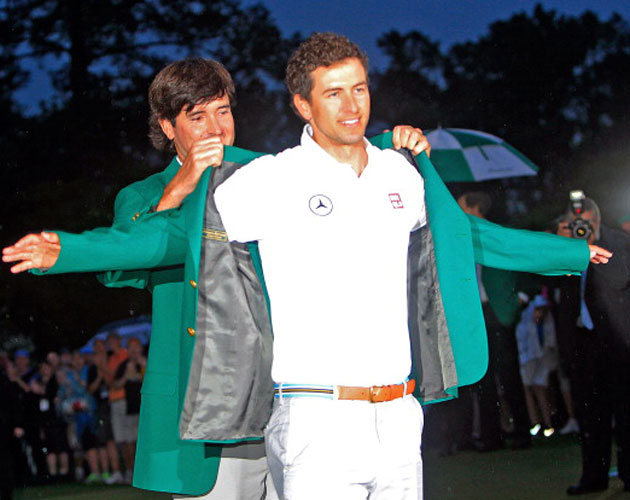 Adam Scott, the 32-year-old Australian, finally started sinking putts when it mattered most.

And with his fellow countrymen cheering him madly on, he sank a 12-footer on the second hole of the playoff to edge out Angel Cabrera and become the first Australian to ever win a Masters.

“I found my way today,” said Scott before donning the Green Jacket. “There was some luck out there. It’s incredible to be in this position. I am honored.”

Cabrera, 43, played gamely but couldn’t hold on to a two-shot lead he held at the turn. The Argentinean, known as El Pato (The duck, for his waddling gait) was able to survive the steady downpour and hit clutch birdies on 16 and 18 to force the playoff.

Both players were even after the first playoff hole. On the second hole, with both on the green in good shape, Cabrera’s putt skirted near the cup but stayed out. That left Scott in position to drain his winner and set off celebrations Down Under.

Tiger Woods, who got off to a slow start on the final day, carded a 2-under 70, good for a tie for fourth. It seems hard to fathom that Tiger hasn’t won the Masters since 2005. He had an uphill battle on Sunday, especially after being assessed a controversial two-stroke penalty on Saturday.