Stanley Cup 2013: The return of the head shot 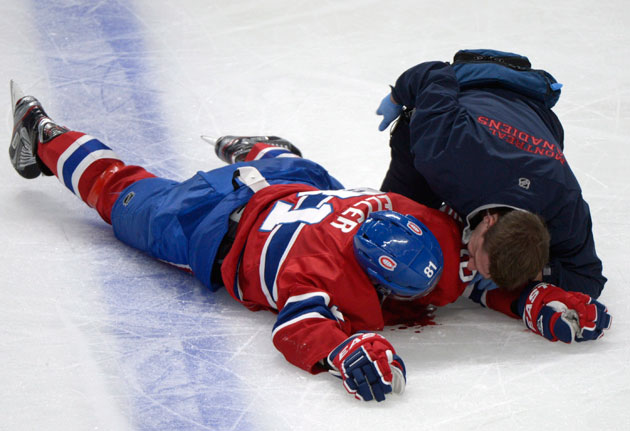 The Montreal Canadiens lost to the Ottawa Senators 4-2  in Game 1 of their playoff series. Montreal outplayed Ottawa in all facets of the game but their goaltender, Carey Price, was predictably shaky, letting in three soft goals.

But the big story of that game was the destructive hit Ottawa Senators’ defenceman Eric Gryba laid on Montreal forward Lars Eller. (If you’re not squeamish, watch it here.) Eller, who suffered a broken nose and concussion, is likely done for the playoffs.

The Canadiens were upset by the hit, claiming Gryba aimed for Eller’s head, an ongoing problem with the NHL is trying to eradicate. After the game, Habs forward Rene Bourque cut right to the chase: “That’s a dirty hit. Not much you can do about it,” he said after the game.

But Gryba defended his action. “My elbow was down. There was no intent to hurt him whatsoever and I hope he’s going to be okay,” said Gryba. The replay of the hit seems to back up Gryba’s argument. He stepped into the unsuspecting Eller with his shoulder down and didn’t lead with his elbow, which is to say, he didn’t violate any of the NHL rules against head shots.

The problem here is that Gryba, who stands 6’4” and weighs 222 lbs, caught the smaller Eller with his head down. Eller was basically a sitting duck and Gryba did what every defenceman is taught to do. Unlike the NFL, the NHL has no rules to protect players in a vulnerable position. So while the result Gryba’s shot on Eller was devastating, under strict interpretation of the rules, it was legal.

While Habs fans will protest, it’s not likely to change the league’s ruling. Unfortunately for the Canadiens, they not only lost an important player but also the all-important Game 1 of the series. We’ll see if they can use it as a rallying point to rebound in Game 2. Perhaps this funny but distasteful Ottawa Sun cover will give them a boost.