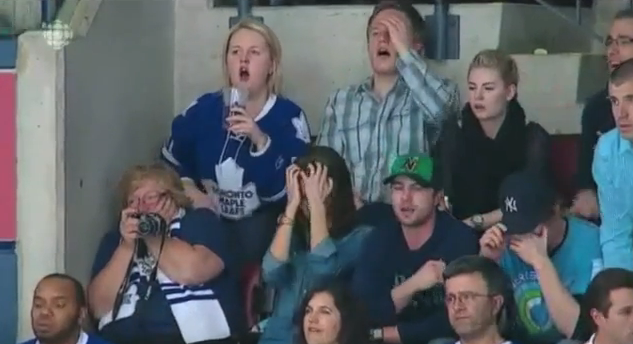 Your team has played a solid game, dished out crunching hits, blocked shots and scored timely goals. They’ve given it their all but nothing is decided after 60 minutes.

So it’s on to the overtime period and fans prepare to ride the emotional roller coaster that is extra time: every pass, every shot could mean the difference between a momentum-building win or a morale-crushing defeat. For many fans, the excitement is too much to bear. There’s such a thin margin between sweet, sweet victory or sudden, crushing defeat. Win and the series is even. Lose and … well fans fans won’t even consider the possibility.

That’s exactly how it played out in Toronto last night as the young Maple Leaf team gamely held on against the battle-tested Boston Bruins through the first three periods. Then, in overtime, it seemed like they might actually win. Leaf forward Matt Frattin had the fans groaning as his shot rang a shot off the post. Minutes later he directed another potential game winner to the net. Again, this one misses by inches, more groans. The arena is rocking as the tension builds.

But, as so often happens, a player who should know better makes a glaring mistake and it’s all over. Veteran Leaf defenceman Dion Phaneuf made one of his many crucial blunders of this series and Boston capitalized quickly.

With the Leafs carrying the play to the older Bruins, Phaneuf tried a bit too hard to be the hero. He made an ill-advised pinch at the blue line but the puck got past him, creating a two-on-one for Boston. Bruin star forward David Krejci calmly skated in with Milan Lucic on his right. He held on to the puck for what seemed like an eternity and, boom, he squeezed a quick wrister under the arm of Leaf goalie James Reimer.

As the red light went on, you could almost hear the air going out of the arena. Great video here of Leaf fans watching the final goal. The Boston players celebrated the win, which gives them a stranglehold on the series. The Leaf players, shocked and devastated, slowly skated off the ice knowing they played their hearts out but now face the almost impossible task of coming back from a 3-1 games deficit.

If you ask any Toronto player or fan, they probably felt they should have won the game. But the scoreboard shows different. That’s the beauty – and agony – of overtime hockey. It’s a thrill ride but it can end very badly. That’s why they call it sudden death.